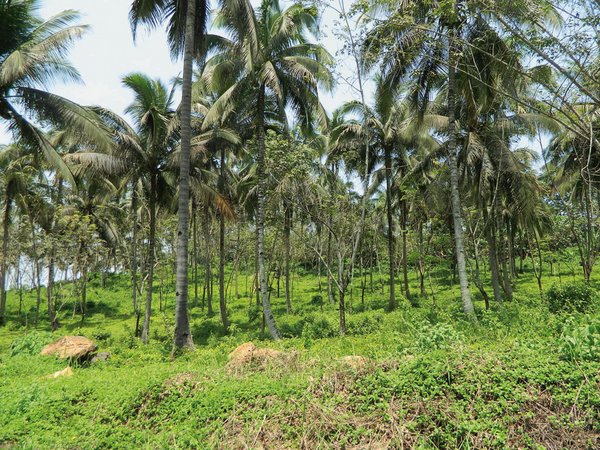 Coconut palms instead of forests – a common sight in the Philippine uplands.
Photo: J. Erhardt

Using and protecting forests – not a contradiction in terms ...

The upland regions of the Philippines are being subjected to severe deforestation. Agroforestry could promote the sustainable use of forests and thus reconcile the interests of forest conservation and climate change mitigation with those of small-scale farmers. But complicated and at times contradictory legislation stands in the way.

The upland regions of the Philippines are facing difficult development challenges. First of all, natural resources in these areas are under great pressure. In the 1950s the uplands were still largely covered by forest. Decades of commercial felling have led to a situation where now, only about seven per cent of these areas remains forested. And yet preserving the forest would be crucial for climate change mitigation, the water balance and to preventing extensive soil erosion.

On the other hand, more and more people are living in the mountainous regions of the country. For many of them small-scale agriculture is the only source of income. Landless people in particular are displaced to mountainous regions in search of land to farm. The high population density and the high concentration of property in coastal regions in the hands of a small number of large landowners are the main driving forces behind this migration.

This means that here, like in other regions of the world, two legitimate and important development goals are opposing each other: (1) to protect the environment and the climate, and (2) to reduce poverty by providing livelihoods for peasants.

Agroforestry as the solution?

Agroforestry is regarded as a very promising option for reconciling the pursuit of these two development goals and thus contributing to sustainable development in the uplands. While income can be generated, perennial components of agroforestry like trees, grasses and shrubs can provide many of the environmental services that natural forests offer.
All the important stakeholders in society – the Department of Environment and Natural Resources (DENR), local government departments, international donors and farmers’ organisations – agree that agroforestry is a key factor in sustainable development of the uplands, yet the social framework conditions for sustainable agroforestry remain difficult.

The DENR is the most significant political actor in the use of the uplands. Almost the whole region belongs officially to the state and has been designated as “forest land”. The DENR is responsible for protecting and administrating this land. This fact alone creates a potential for conflicts, as in reality large sections of the “forest land” are no longer covered by forest, but are being farmed by millions of smallholders, in some cases already for several generations.

Since the 1990s, after decades of almost unregulated logging in the upland forests of the Philippines, the DENR has intensified its efforts to protect the forest land. In 1992 the first general ban on tree felling was imposed, and has become gradually stricter ever since. Now even the felling of some trees planted by the farmers themselves is prohibited unless the trees are registered and the farmer has a resource use permit.

In the Philippines there have been and still are a large number of programmes and projects for controlled use of the uplands. They have been initiated by various government institutions such as the DENR, the Department of Agrarian Reform (DAR) and others. To some extent, these are even contradictory. In 1995, the DENR launched a large-scale programme on community land use for upland village communities aimed at ending this hotchpotch of small projects. Community-Based Forest Management (CBFM) stipulates that land placed under community control is partly used for agroforestry and partly restored to forest and protected by these communities. The term of use is 25 years. However, there are also tight restrictions on the land released for utilisation; if the conditions of use are contravened the resource use permit can be withdrawn. Nevertheless, for many farmers the introduction of CBFM means progress, since they can legally cultivate the land and they even possess a title to the land – albeit for a limited period. Yet it has to be emphasised that neither the large-scale CBFM programme nor the other programmes are reaching all the farmers, as the scope of these programmes is still by far not enough for the number of smallholders living in the uplands. Neither are some of the farmers interested in the collective responsibility that is part of the CBFM. This means that the majority of the upland smallholders continue to live and work without any legal protection. However, at the same time as introducing the CBFM strategy, efforts to combat “illegal” land use by unorganised smallholders have been intensified.

The decentralisation reform of 1991 further complicated the legal position of upland farmers. Local tiers of government such as the municipalities are looking to strengthen their position in relation to central government and to have a say in local development. Although officially the forest lands are still under the control of the DENR, this situation leads to bickering over responsibilities – especially as the delineation between forest land and other land that is now administered locally is often unclear and disputed. This puts the farmers concerned at the mercy and discretion of a number of administrative bodies competing for authority.

The consequence:  less sustainability of use

The Philippine upland farmers are therefore faced with restrictive and frequently changing land-use laws, endless red tape and a power struggle between various authorities. A study by the Centre for Rural Development (SLE) in Berlin on behalf of GIZ and the World Agroforestry Centre (ICRAF) assessing the sustainability of agroforestry systems on the islands of Leyte and Mindanao revealed that this difficult situation has negative consequences for land use by upland farmers. It showed that farmers without long-term and secure land-use rights have less interest in using the available natural resources sustainably. Instead, insecurity leads the farmers to try – understandably – to draw economic benefits from their land as quickly as possible. Thus, in the study the farmers without long-term land-use titles have significantly fewer trees per hectare on their land than farmers with these titles. Trees only pay out economically in the longer term, but are often the elements of agroforestry systems providing the greatest environmental benefits. When questioned, many of the farmers without permanent land-use rights said that they would be willing to invest considerably more resources in soil protection measures like tree planting if the land from which they gained their living belonged to them.

Looking at current market prices, there would be great economic potential in planting trees for timber. But, as small-scale timber producers say, it is not only this scepticism about long-term investment, but also the long and complicated bureaucratic process for legal felling that puts them off. The registration of trees is long-winded and the regulations on timber harvesting are frequently altered. Many farmers wait several years for their resource use permits, and more than a few pay bribes to get the necessary authorisation at all. In some cases trees are felled by illegal loggers while the proceedings for legal felling are going on. Consequently it is hardly surprising that many farmers with previous experience in timber growing are not interested in planting more trees, and instead opt for profitable short-term crops such as vegetables, bananas or maize. These, however, contribute little to climate change mitigation and to preventing soil erosion. Thus in the given social circumstances the restrictive ban on felling to protect the forests results, paradoxically, in the planting of fewer trees. Since the smallholders nevertheless still need timber, the statutory regulation is actually increasing the incentive to continue logging in the natural forests.

How to escape the paradox

Therefore, to move away from this undesirable incentive structure, the social conditions would have to change. As a starting point, consideration could be given to removing the “forest land” designation from areas that are densely populated and have long been used by smallholders. To a certain extent this would merely be an adjustment of the legal situation to reality, and could have a number of positive impacts. First of all the total area of land administered by the DENR would be significantly reduced, which would make it much easier to monitor effectively the regions that are really worth protecting. Secondly, the land now no longer under central government (DENR) control could be administered at local level with the involvement of local farmers’ organisations. Secure land-use rights for a longer period could improve the motivation of smallholders to use their land with care in the long term. This would mean that many farmers would no longer have to negotiate the many bureaucratic obstacles to timber harvesting on forest land and would thus significantly increase the incentive to plant trees. Ultimately, a process of this sort could be used to clearly demarcate the remaining forest lands and thus reduce potential for conflict between local authorities and the Department of Environment, as well as to alleviate insecurity among the farmers. However, this approach would result in DENR losing considerable influence. It is therefore questionable whether the Department would be interested in such a solution.

Another possibility would be to obtain ecologically important environmental services not from timber trees, but from an increase in fruit tree or rubber cultivation by smallholders.However, the management of agroforestry systems based on fruit trees or rubber is particularly complex, as the SLE study showed. To make this economically attractive to smallholders would require intensive and long-term efforts in capacity building.

Furthermore, socio-economic incentives to make reafforestation or sustainable management of forests attractive could be considered. There are GIZ pilot measures of this sort on the island of Leyte which test the implementation of REDD+ (Reducing Emissions from Deforestation and Degradation) in the context of local authority-based management. However, whether this is worthwhile in the circumstances described above, and whether it achieves the objectives in terms of environmental and social sustainability, remains to be seen.

The last two solutions would be very cost-intensive, requiring major logistical efforts. Moreover, they would not solve the problem of the insecure legal position of farmers living and working “illegally” on forest land. A change in the legal framework, on the other hand, also requires the strong political will to accept a loss of influence in order to achieve the objective. That is why none of these approaches provides an easy answer, and why in the Philippines there is still a long way to go to create social conditions that are really conducive to the sustainable use of the upland regions.