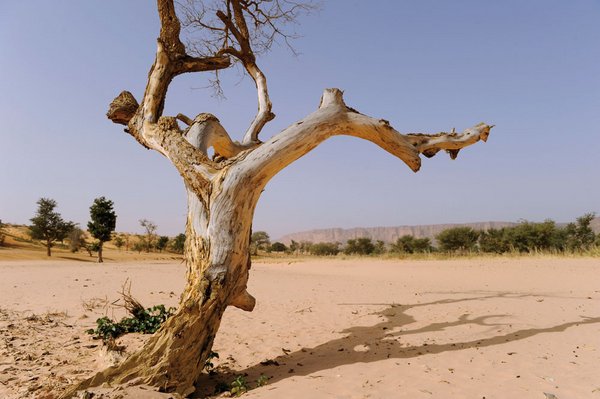 Each year, twelve million hectares of land are subject to desertification and drought.
Photo: J. Boethling

UNCCD – the accord for global land stewardship

With more than 900 million people world-wide affected by chronic hunger, international action on soil conservation is urgently required. The United Nations Convention to Combat Desertification (UNCCD) enjoys substantial support, and the author of this article demonstrates that it could play a key role as a global policy and monitoring framework in addressing land and soil degradation.

Healthy soil is an essential but largely overlooked natural resource. More than 99 per cent of food world-wide comes from soil ecosystems. Land, of which soil is a key component, not only provides food and raw materials, but plays a key role in regulating water and the global carbon budget, and is a valuable source of biodiversity.

Yet, each year, twelve million hectares of land are subject to desertification and drought. And about 20 per cent of the world’s cultivated areas are affected by land degradation. As of this year, 168 of the Convention’s 195 Parties have declared that they are suffering from desertification. But the tide is turning.

The Rio+20 outcome on desertification, land degradation and drought contained in The Future We Want has boosted political momentum to address the challenge globally by strengthening the UNCCD’s mechanisms and profiling land and soil in the post-2015 global development agenda. This move towards a holistic framework with lasting solutions to land degradation and drought issues places food production on a more sustainable and environment-friendly path.

With population growth and changing consumption patterns, the demand for food is expected to increase by at least 50 per cent by 2030, which may require an additional 120 million hectares of agricultural land by 2030, a new farm the size of South Africa. But this is not the only reason why the loss of cultivable land urgently has to be stopped. The international community is losing up to USD 490 billion a year due to land degradation, equivalent to five per cent of global agricultural GDP.

The de facto global policy of degrading land and then abandoning it and migrating is unsustainable because productive soil and land are finite, making land restoration indispensable. So what can be done, bearing in mind that governments usually do not or are ill-prepared to respond to slow-moving crises such as land degradation and drought?

Following the Rio Earth Summit in 1992, there has been significant growth in laws to manage the natural environment. But despite continuous calls by soil scientists for an international and legally binding policy framework, soil has remained a policy blindspot, and existing legislation is fragmented.

From 2000 to 2011, the Sustainable Use of Soil and Desertification Specialist Group of the International Union for the Conservation of Nature (IUCN) Commission on Environmental Law has investigated the legislative aspects of soil. To address the problem of soil conservation globally, it proposed  negotiating a legal instrument, either a Protocol or a technical annex on Security and Sustainable Use of Soil under the UNCCD, or a separate Convention focusing on sustainable use of soils. Experts concur that the last option is not politically viable, given the long process of negotiating and ratifying yet another convention on the environment.

A number of arguments have been advanced for strengthening the UNCCD, as it is already well positioned to address the problem of soil and land degradation. The Convention encompasses soil in its definition of land: “the terrestrial bio-productive system that comprises soil, vegetation, other biota and the ecological and hydrological processes that operate within the system” (Art 1.). And compared to other international agreements related to soil, UNCCD has near universal support, with its 195 countries and the European Union. The Convention values traditional knowledge and a participatory approach ensuring that successful experiences from the ground filter into its policy and knowledge processes.

By providing a platform for policy-makers to learn about successful initiatives such as farmer managed natural regeneration initiatives in the Sahel and by collecting and documenting over 240 sustainable land techniques and creating the Land for Life Award, the Convention has legitimised and enabled the diffusion of these practices. It is also unique in its linking environment and sustainable development, which can be a big advantage in further promoting synergy with the conventions on biodiversity and climate change. Any global soil-protection strategy must contain both environmental and development elements.

The UNCCD’s current mandate is limited to drylands ecosystems, which is often presented as a major barrier to serving as the global policy instrument on land stewardship. Nonetheless, some countries without drylands are listed in Annex V of the Convention and have ratified it, de facto, recognising that land degradation and unsustainable soil use is a global issue, not restricted to drylands.

Further, more than half the parties have already designed a National Action Programme as a basis for all action to combat land degradation, including soil degradation. The national reports submitted provide empirical data on the status of land cover in affected regions in order to signal changes in soil and land improvement at country level.

Environmental agreements lack mechanisms to sanction non-implementers, but the UNCCD’s development and application of indicators is reputed to be the most advanced assessment mechanism among environmental conventions, and the shift to a land-degradation neutral world strengthens its value.

Last year, at the United Nations Conference on Sustainable Development (Rio+20) in Rio de Janeiro, governments recognised desertification, land degradation and drought as challenges of global dimensions that continue to hamper sustainable development, particularly in developing countries. They stressed “the need for urgent action to reverse land degradation” and agreed “to strive to achieve a land-degradation neutral world”.

The eleventh Conference of Parties (COP11) to the UNCCD, taking place from 16th–27th September 2013 in Windhoek, Namibia, convenes under the theme “A stronger UNCCD for a Land-Degradation Neutral World”. The Parties will have a chance to address the target-setting approach at the level of impact and consider creating a working group under the UNCCD that could discuss further steps to enhance parties’ action at all levels.

Some of the options have already been long in discussion. At the 2011 UN General Assembly High-Level Meeting on Desertification, Land Degradation and Drought held in New York, many leaders made a call to “enhance and foster the implementation of the UNCCD as a global policy and monitoring framework to address the issues of soil and land degradation”. Indeed, several mechanisms could be explored for achieving this purpose through attaching a protocol or an annex on global land and soil degradation. Addressing this agenda at a global level requires a scientifically credible, transparent and independent assessment of existing, policy-relevant knowledge on land and soil degradation as well as a monitoring of its trends provided by a globally recognised science-policy interface.

Finally, we should learn from the shortcomings of the Millennium Development Goals, which failed to consider natural resources. Degrading lands are underperforming natural assets, but are very often all the rural poor have in many developing countries. Here, degradation correlates with poverty, food insecurity and child mortality. Ensuring land stewardship is profiled strongly in the post-2015 global development context and could make the difference.

Today, over 900 million people world-wide are affected by chronic hunger. Science says the global temperature is on track to rising above 4°C, so that droughts will become even more frequent, prolonged and intense, and will put millions of people under threat of starvation. We will not sustainably achieve food security and alleviate poverty without co-ordinating international action on sustainable soil and land conservation.