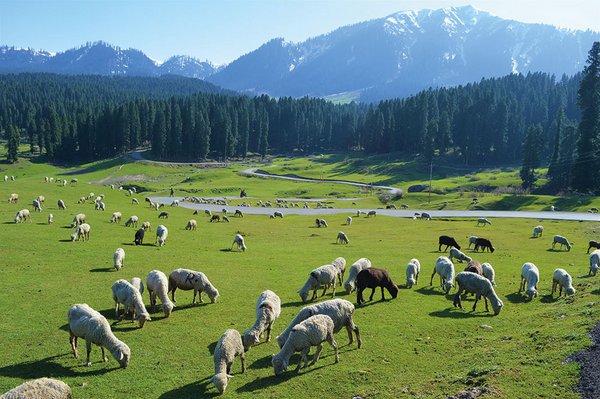 From May to October the herders migrate their livestock from lower parts of Kashmir for grazing in the highland pastures.
Photo: Athar Parvaiz

With the support of diligent sheep farmers, the selective breeding policy of the government in Himalayan Kashmir in northern India is swiftly moving the region towards self-sufficiency in mutton production. This also offers opportunities for unemployed youth.

Meat plays a key role in the food patterns of the majority of the over seven million people living in the Kashmir Himalayas. In cities and towns, people mostly eat mutton, while in rural areas people prefer beef. Mutton is considered as all-season food in Kashmir and is also massively used for Wazwan, a multi-course meal with a myriad of meat-based dishes eaten during weddings and other functions. The region has traditionally imported mutton from Indian states like Rajasthan and Punjab. But, Kashmir government’s policy of improving mutton production through selective breeding is gradually changing this scenario. The new breed called “Kashmir Merino” which is making it possible is being completely documented for its registration as a separate breed.

Heading for 75 per cent self-sufficiency by 2029

Geographically, Kashmir valley is a temperate zone lying in between the outer and inner range of Western Himalayas. The region’s peculiar geographical location and seasonal conditions offer the best environment for sheep rearing. From the total livestock population of 9.2 million in the region, 3.4 million comprises the sheep population as per the 19th livestock census – the latest one available – carried out in 2012. The average size of a progressive sheep farmer in Kashmir is 150-200 animals. But Kashmir’s Sheep Husbandry Department is still not satisfied with the status quo. “Currently, we are only producing 13.3 million kilograms, which is 40 per cent of our total annual mutton consumption of 31 million kilograms, locally. Considering the fact that our people are voracious meat eaters, we have to make efforts to achieve self-sufficiency,” says Sheep Husbandry Department Director Abdul Salam Mir. Seventy-five per cent of local mutton consumption is to be produced locally by 2029.

In the past four years, the government has provided sheep to some 5,000 farmers to help them set up sheep farms. Besides, it has been offering health support for the livestock of thousands of other farmers. Recently, the government sanctioned 130 million rupees (1.95 million US dollars) for creating more sheep breeding farms for the livestock imports (for breeding) and establishing 35 more veterinary clinics for sheep at various locations across the state.

Improving the feed base

In summers, alpine pastures known as Bahaks or Margs are the natural habitats of sheep. The herders migrate their livestock from lower parts of Kashmir for grazing from May to October to these highland pastures, which are situated in the upper reaches of the forests and are controlled by the state government. Over the years, some of these pastures have been facing issues of degradation due to continuous and indiscriminate grazing and extinction of superior grasses and legumes. Government officials say that they are in the process of addressing these problems in order to improve the quality of the grazing areas. “We have sought a special financial package for the development of these pastures,” says Mir. The package is being used to finance the implementation of several programmes, such as the aerial fertilisation of pastures (or manual fertilisation at isolated places where aerial spraying is not possible), eradicating toxic and obnoxious weeds, reseeding clover and other fodder crops or planting fodder trees.

According to Mir, pastureland in plains is shrinking because of growing urbanisation and population growth. “That is why we are now going for the vertical growth of sheep livestock, which means we will increase the meat production capacity of Kashmir Merino,” Mir notes. “For example, if an individual so far used to have the carcass weight of 14 kg, we will take it to 18-20 kg.” His department is importing livestock from Australia, New Zealand and Texas (US) to infuse new blood into the stock of Kashmir Merino. The focus is not only on meat. “While we want to improve mutton production, we can’t afford to lose the wool parameter which we have already achieved. That is why we are importing dual-purpose Merino. This can help us improve meat production as well as wool quality,” Mir explains. “Presently, Kashmir Merino produce wool which has a thickness of 21 microns. But we want to make it even finer,” he says.

Over the past many years, the Department of Sheep Husbandry in Kashmir has established eight sheep breeding farms at different locations for undertaking cross breeding and other research programmes along scientific lines. Rams are being produced in these farms for serving the flocks of sheep farmers in upgrading. According to Department of Animal Husbandry officials, about 29,000 breeding rams produced in its farms have been distributed for crossbreeding in private flocks. The farmers can use the rams – and three ewes which each of them is also provided with – free of charge for a period of three years. Then the animals have to be returned – also to avoid inbreeding.

As part of the cross-breeding programme, Kashmir valley ewes were crossed with Australian Merino rams, and F1 (first generation hybrid) ewes were bred to Delaine rams of the USA. And then F2 (second generation) hybrids were bred among themselves after proper selection on the basis of wool quality and body weight. The matting among F2 generation continued till a breed with steady and uniform characters evolved which was named as Kashmir Merino.

In addition, in order to establish a vital link between the department and the farmers, 549 sheep extension centres were opened across the length and breadth of the region. Other technical programmes include castrations, lamb markings, docking, health cover, mechanical shearing and education of farmers about scientific farming practices. Sheep husbandry offices are run in each district of Kashmir to offer farmers advice. In 2018, 1,343 farmers joined the sheep development programme with the help of the Sheep Husbandry Department.

“The quality of sheep which we had before the 1990s used to be low on both meat and wool. But since we started the cross-breeding programme to get Kashmir Merino, both these issues have been resolved,” says Imran Nazir, a health officer at the Sheep Husbandry Department, adding that Kashmir Merino is far more productive than original local breeds, both in terms of mutton and of wool.

Enthusiastic sheep farmers in the region have been of great help in spreading the quality sheep germplasm and improving mutton production in the region. Thirty-seven-year-old Hilal Ahmad Yatoo of north Kashmir’s Chandarhama village is one of these farmers. Yatoo owns a flock of 130 Kashmir Merino. What has particularly made him a name in sheep farming is the way he maintains the quality sheep germplasm. He is the leading supplier of breeding rams among farmers in the region.

“We take a lot of care while choosing which ewe should breed with which ram. Much thinking goes into it and also into avoiding inbreeding,” Yatoo says, adding that he uses colour-markers. “We also separate the couples when we get the feeling that a certain ewe is ready for breeding.” When Yatoo sends his flock to the pastures in Gurez-Bandipora District for three months for summer grazing, he pays extra money to the herder to ensure that his livestock doesn’t get mixed with that of others and gives him instructions by marking animals with colour-codes for breeding. So, not surprisingly, his breeding rams fetch him good prices with some of them selling at between 50,000 rupees (USD 757) and 100,000 rupees (USD 1,514).

The young farmer sells around 20 to 30 sheep, including both ewes and breeding rams, each year. Early this year, Yatoo says, he and three other farmers sold 56 sheep to the Faculty of Veterinary Sciences and Animal Husbandry of Sher-e-Kashmir University of Agricultural Sciences and Technology (SKUAST) for its sheep farm. And Yatoo’s work was acknowledged at national level when he was conferred the Innovative Farmer Award by the Indian Council of Agricultural Research (ICAR). Yatoo’s passion for quality sheep farming is also reflected in the housing management he has opted for his flock. The barn where he keeps his sheep differs considerably from the average Kashmir barn. Yatoo and his younger brother, Showkat, have made use of the Internet for downloading designs of wooden mangers from which the sheep eat. Also thanks to the Internet, they designed the floor in a manner allowing the waste to pass through small gaps and get accumulated in large trays which are removed periodically. This keeps his sheep from soiling their bodies with their waste.

As the government and private job sector offer hardly any employment opportunities, in recent years, educated youth have started getting increasingly involved in sheep production. Some 2,500 youth are currently involved in sheep rearing and are in touch with the Sheep Husbandry Department and the Faculty of Veterinary Sciences and Animal Husbandry wing of the SKUAST to obtain help and guidance.

Athar Parvaiz is a freelance journalist based in Srinagar/ Kashmir, India.
Contact: atharparvaiz.ami@gmail.com