The insatiable hunger for cheap meat

If the current trend in global meat demand persists, meat production will need to rise from 300 million tons today to 470 million tons by 2050. Climate and our natural resources would lose out, our author warns. 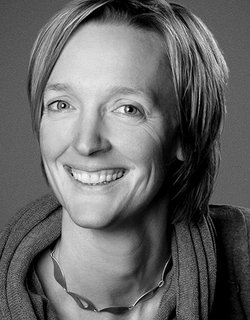 In contrast, demand for meat is growing rapidly in the five major emerging economies of Brazil, Russia, India, China and South Africa, known by their acronym BRICS. In the BRICS countries, which combined represent 40 per cent of the world population, meat consumption rose by 6.3 per cent per year between 2003 and 2012, with a further 2.5 per cent increase per year being expected for the 2013-2022 period. This means that approximately 80 per cent of the world’s meat sector growth by 2022 will occur in developing countries (see also Figure at the end of the article).

There are, however, major differences in consumption structures in the world’s two most populous countries, China and India. In India, vegetarianism has deep cultural and social roots. Many Hindus do not eat any meat at all for religious reasons. In surveys, between one in four and one in three of all Indians declare themselves to be vegetarians. But the number of meat eaters is on the increase. Since the start of the economic boom in the early 1990s, a new burgeoning middle class has been changing their way of life to resemble that of their western counterparts, and this includes the consumption of meat. Nonetheless, Indian per-capita meat consumption is less than one tenth of the level now reached in China.

There are also disparities in the new consumption structures within individual countries. Especially in the urban conglomerations meat consumption is on the rise. In China, animal-based protein consumption in the cities is increasing twice as fast as in the rural areas. City-dwellers tend to be more affluent than rural dwellers. They eat more food overall and their dietary habits differ from those of their rural counterparts, especially where it comes to animal-based foods. In 2011, Chinese rural dwellers consumed 26.1 kg meat, dairy and egg products – a 12.4 kg increase compared to 1990. During the same period, urban Chinese consumers increased their consumption of animal-based products by 19.1 kg to a total of 48.9 kg.

If this trend in global demand persists, the world’s farmers and agribusiness enterprises will need to boost global meat production from 300 million tons today to 470 million tons by 2050, generating very serious ecological pressures and social impacts along the value chain. Production structures will change increasingly. While 50 per cent of all pigs in China today are raised on smallholdings, this pattern will soon change unless preventive action is taken. The same technology- and capital-intensive processes that dominate livestock production in the northern hemisphere are pushing into the lucrative southern markets, where livestock production in industrial-scale finishing units is rapidly gaining ground.

This is despite the fact that today’s production environment could hardly be more different from the past. Industrial-style livestock production in Europe and the USA was established under conditions of low feed prices, low energy costs and cheap land resources. Nowadays, agricultural land, feed and energy are scarce and costs are high. This is why meat production levels are growing less strongly now than they did in the past few decades, with the exception of pig and poultry production. The latter two livestock categories have good feed-to-product ratios and can be kept at high densities, thus meeting the insatiable demand for cheap meat.

It is difficult to see right now how all this livestock is to be fed in the future, as such large quantities of meat are not produced in traditional systems where the animals graze by the side of the road or out on pasture. Theoretically humans and ruminant livestock do not compete for their food and feed, with bread grains being grown in one plot and grass and clover for the cow in the other. But those kinds of systems are long outmoded. In order to get more production out of the animals than would be possible using relatively low-energy feeds such as grass, silage and hay, high proportions of protein-rich concentrate feeds are added to the animals’ daily rations. Almost a third of the world’s arable land is now devoted to producing feedstuff for livestock. Soya is and will continue to be the prime feed protein source and soya bean production alone will need to be doubled from its current global level of 260 million tons per year to 515 million tons. Per-hectare yields will need to increase or more land must be devoted to soya beans – or both.

The world’s major soya bean producers are the USA, Argentina and Brazil, while China and the EU are the biggest importers. Three quarters of the soya produced worldwide ends up in China; the EU imports a total of approximately 35 million tons. The quantity of soya beans imported into the EU converted into virtual land comes to 17 million hectares of arable land, roughly the same as the entire agricultural area of Germany. Industrial-style livestock production therefore does not avoid land take. Quite the opposite is true: the production of feedstuff competes with food production on a large and environmentally damaging scale.

Feed production in particular is associated with massive greenhouse gas emissions. Climate-damaging emissions are not only generated in the form of methane resulting from ruminant digestion, but large quantities of nitrogen oxides, including nitrous oxide which is 300 times more damaging to our climate than carbon dioxide, are emitted as a consequence of land-use change as well as fertiliser and pesticide use associated with the production of livestock feed. And feed production is not only bad for our climate – industrial-style livestock farming also pushes other planetary boundaries through biodiversity loss, marine eutrophication and impacts on the global nitrogen cycle.

And yet it would be so easy to make changes at various different levels: The average German presently consumes roughly 60 kg of meat per year. This means that meat is consumed daily and with almost every meal. Even just a reduction in meat consumption to a level of twice or three times a week would considerably reduce market pressure. Moreover, almost seven per cent of the meat purchased by German households gets thrown out. Converted proportionally to the total number of animals consumed in Germany this means that 45 million chickens, 4 million pigs and 230,000 heads of beef cattle are needlessly fed and butchered every year. Food waste squanders resources and must be avoided at the very different levels of production, processing and consumption. And then there is agricultural policy as an element of proactive structural policy. Many organic farming associations demonstrate how meat production can be ethical, ecologically benign, and fair. The use of genetically engineered feed is prohibited in organic farming. Indeed, up to 70 per cent of feed must be produced on the livestock producer’s farm or come from nearby farms, and the use of antibiotics is highly restricted. These are two core elements that fundamentally change how animals are produced. For the end consumer, organic meat is at least a third more expensive than non-organic meat, but ultimately, for society at large, that is a price worth paying. 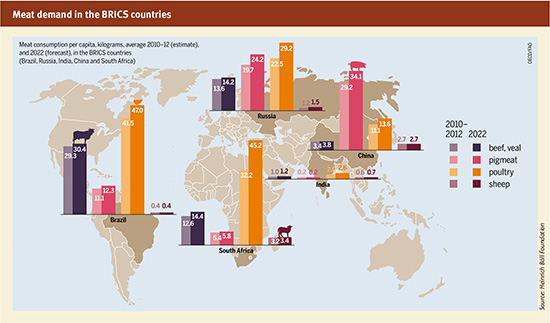