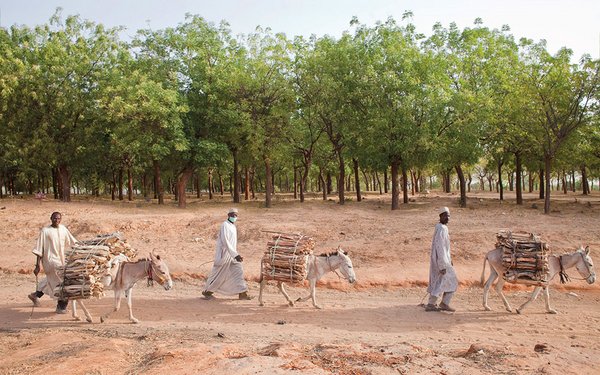 Between 2007 and 2019, just under 20 million hectares were restored under the GGW Initiative.
Photo: FAO/ Giulio Napolitano

The African Union wants to create new prospects for the people of the Sahel and halt desertification with a Great Green Wall. But halfway through the time envisaged for the concept, the ambitious initiative is not yet where it should be. A brief stocktaking

In 2007, the African Union (AU) initiated the project of a "Great Green Wall of the Sahara and the Sahel" (GGW). The plan was to create a green belt 15 kilometres wide and 7,775 kilometres long by 2030, stretching from Dakar in Senegal to Djibouti on the Red Sea. Trees, plants, and grassland will one day cover an area of 100 million hectares – at least that is the goal. Eleven countries were initially involved.

The green wall is intended to help stop desertification. The main driver of desertification is soil erosion, which occurs when the fertile soil surface is blown away by wind or washed away by floods or heavy rain. Climate change-induced droughts are also driving the desertification of the Sahel.
The food security and livelihoods of many of the 232 million inhabitants of the Sahel are threatened. Thus, the AU is also seeking social and economic improvements through the initiative. This includes the creation of ten million "green" jobs for tree planting, irrigation, and monitoring of the greened areas, which would allow agricultural use of the renaturalised land.

Mixed results at the halfway point

Now that more than half of the project’s timeline has passed, those responsible for the GGW have presented an interim evaluation. The results are mixed, although progress has certainly been made. Politicians from Senegal to Djibouti are working together to find answers to the problems which climate change is causing, such as droughts, food shortages, conflicts over resources and migration. However, when measured against the project’s ambitious goals, the successes are rather modest in terms of numbers. Between 2007 and 2019, just under 20 million hectares were restored – 20 per cent of the 100 million hectares targeted by 2030. In the same period, about 350,000 "green" jobs were created – out of a hoped-for 10 million. Around 220,000 people have been trained in sustainable agricultural, pastoral and non-timber management. And the land area restored so far will sequester over 300 million tons of CO2 by 2030.

Meanwhile, the number of countries participating in the initiative has nearly doubled. This will increase the impact of the Green Wall. North African countries are now involved, as are other West African countries. In addition, the joint commitment of all GGW member states against climate impacts could strengthen solidarity among them in the fight against poverty and the causes of flight.

Thanks to the AU's close collaboration with the UN Convention on Desertification (UNCCD, also see article on pages 22–23), financial support has also been advanced. In January 2021, a corresponding acceleration mechanism (The Great Green Wall Accelerator) was adopted at the One Planet Summit. Meanwhile, more than 19 billion US dollars (USD) has been raised by several multilateral and bilateral organisations for 2021–2025 for the GGW initiative – nearly 60 per cent of the 33 billion USD needed to meet the 2030 targets.

GGW officials know that ultimately the initiative can only succeed if it focuses on diverse greening and sustainable land management instead of a fixed belt of trees across the Sahel. Arbitrary afforestation, as practised in many places in the past, is of little use; many seedlings soon die. With a continuous wall, trees would also be planted where there are no people to care for them. To be successful, the GGW initiative must draw on local knowledge and involve local people as well. Studies such as Restoring African Drylands by the European Tropical Forest Research Network (ETFRN) show how natural and climate-adapted farmer-led regeneration projects, simple water collection methods, and binding community land use rules have restored productivity in degraded soils.

The GGW initiative has had to contend with difficult conditions. Its success is threatened not only because of global warming, but also because of political corruption and insurgent groups. And the region has a long history of escalating violence. Governments working together to fight corruption and terrorism, investing in the education of their people, and providing money for irrigation will be crucial for the success of the Great Green Wall. If such measures are taken, a green landscape could indeed blossom across Africa.