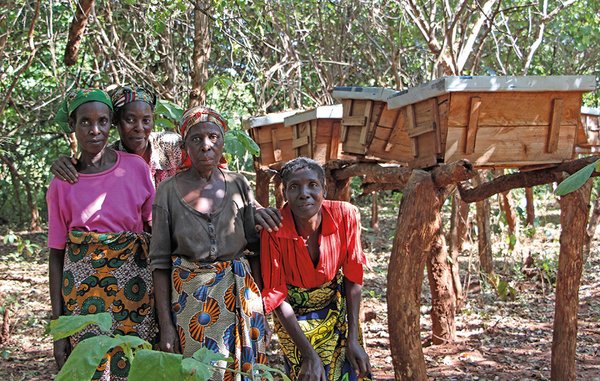 Inclusive trade that encompasses poor and marginalised groups in particular is the goal of EIF promotion.
Photo: SNV

The EIF – bridging trade, development and the world’s poorest countries

The Enhanced Integrated Framework (EIF) is a platform where donors and international agencies work with 51 of the world’s poorest countries to promote inclusive development through increased and better trade. Rural areas, and especially the poor and marginalised groups living in them, are often focused on in particular.

The Enhanced Integrated Framework emerged from the initial desire of international agencies such as the United Nations Development Programme, the World Trade Organization, the World Bank and others to step up their co-operation, reduce the potential for duplication of efforts and achieve economies of scale in the Least-developed Countries (LDCs). It is based on the principle of partnership, where, by working through a common framework, the development initiatives can be more efficient and effective. The deepening and evolution of the programme since the original “Integrated Framework” has resulted in a country-driven approach that seeks to link trade to national and sector strategies, to establish structures in countries to better co-ordinate between different stakeholders engaged in trade and development, as well as to direct public investments in a systematic and co-ordinated manner.

Supported through a Multi-Donor Trust Fund with contributions of over 300 million US dollars from almost all major donors as well as many emerging donors, the EIF aims to be catalytic through the funding of priority projects. This includes funding common diagnostic studies (the Diagnostic Trade Integration Studies – DTISs) in all countries that are used to both inform national policy related to trade, as well as to provide a blueprint to prioritise interventions from Development Partners. Furthermore, the EIF offers support to strengthen institutions to conduct inter-ministerial cooperation on trade and increase the efficiency of engagement with the donor community through trained teams and implementation units in each Ministry of Trade (Tier 1 projects). Based on the priorities identified in the DTIS, the EIF finances catalytic investment projects focused on developing systems or specific sectors to build the country’s capacity to trade (categorised as Tier 2 projects). In all of this, there is a strong emphasis on developing inclusive trade, where particular attention is given to benefiting poor and marginalised groups, often women and youth.

The Diagnostic Trade Integration Studies almost invariably include an analysis of the agriculture sector from a trade perspective as well as, in many cases, other related issues such as those dealing with Sanitary and Phytosanitary (SPS) measures.

At the institutional and policy level, all EIF Countries establish national steering committees to bring together the key stakeholders related to trade, including agriculture ministries and private sector representative organisations. In Nepal, for instance, the Agriculture Ministry is part of the EIF National Steering Committee and was actively involved in the design and preparation of the DTIS and its implementation, including the strong integration of trade dimensions in the country’s Agriculture Development Strategy. The EIF-supported ginger project, which is aimed at enhancing the quality of ginger exports, thereby raising farmers’ income, is co-financed with the Standards and Trade Development Facility Secretariat and implemented by the Food and Agriculture Organization (FAO) and the Ministry of Agriculture. Likewise, in Vanuatu, agriculture plays a key role in trade policy, and agriculture officials participate in regular coordination meetings of the National Trade Development Committee. Joint activities are now extending into more collaborative donor funding, with the European Union’s National Indicative Programme specifically highlighting that the Ministries of Agriculture and of Trade are “jointly involved in achieving rural development”, designing initiatives in the cocoa, coconuts and beef sectors.

Given the high importance of agriculture to many of the LDCs, agriculture and rural development issues feature prominently in the DTISs, and comprise almost two thirds of the larger investment projects (see graph). Examples include developing rice for export in Cambodia; mango production and processing in Mali; smallholder linkages to processors in Malawi and Zambia; and introducing climate smart technology to horticulture farmers in Lesotho. Many other EIF projects also have a strong impact on rural development, such as the initiatives establishing cross-border trade market centres in Rwanda; supporting standards and SPS support in Burundi and Lao PDR; and extending business support services to rural districts in Uganda. 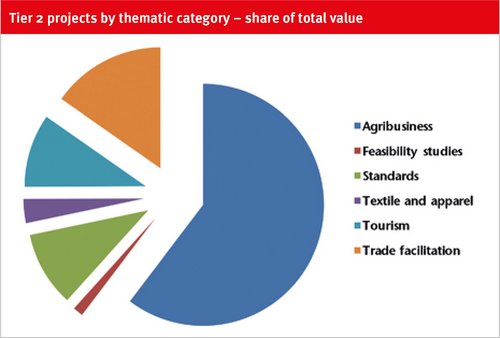 Where to from here

While the EIF provides an effective forum to bring together trade focused development partners, the programme is increasingly working with sector specific partners including the Global Donor Platform for Rural Development. In recognition that agriculture and trade agencies and donors need to work together more effectively, the EIF is working with the FAO in selected pilot countries, including Mozambique, Rwanda, Tanzania and Zambia to promote these linkages. The work focuses on comparing the relevant agriculture and trade policies, plans and institutional frameworks with the objective of working towards increased alignment and linkages. This includes comparative analysis of National Agriculture Investment Plans (NAIPs) and DTISs to identify gaps and synergies on agricultural trade, stimulating increased policy dialogue between agriculture and trade stakeholders and joint donor engagement on priority areas.

Mangos in Mali
Through encouraging good agricultural practices and increased phytosanitary treatment of mango orchards, over 400 rural women have increased their earnings from mango farming and processing into jam. The EIF project has focused on building the capacity of key actors in the value chain (women farmers, producers, traders and exporters), provided guidance and support to the GlobalGAP certification for a dozen exporters, and offered marketing support at national and international trade events.

Honey in Zambia
The EIF has stimulated increased honey production in Zambia, one of Africa’s largest exporters of honey to Europe. Supporting mutually beneficial linkages between national processors, extension services and beekeeping groups, the EIF project trained over 6,000 farmers, and increased production to over 2,500 metric tonnes. The initiative also stimulated additional support from the African Development
Bank focusing on the SPS component.