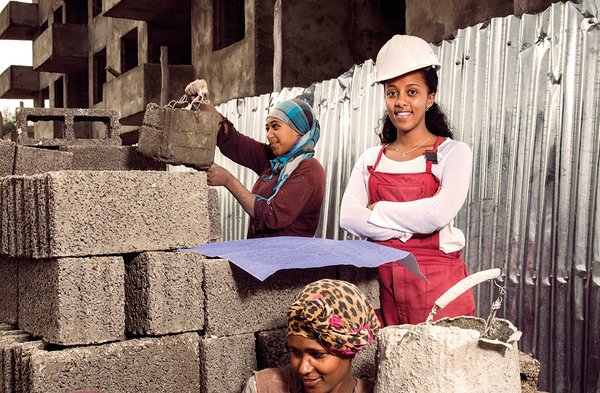 The economic potential of gender equality

Two recent reports suggest that gender inequality is costing enormous amounts in terms of lost income. Both a World Bank survey and a McKinsey Global Institute study indicate that promoting gender equality could have a huge impact on economic growth.

The significance of gender equality in taking up the enormous challenges the world faces has been addressed in two major international reports. The McKinsey Global Institute maintains in a September 2015 publication that advancing women’s equality could add at least twelve trillion US dollars to the gross domestic product of 2025. And a May 2018 report by the World Bank concludes that achieving gender equality for girls and women would not only improve their welfare and their capacity to exert power but would also help their countries to reach their full development potential.

“Unrealized Potential: The High Cost of Gender Inequality in Earnings” is the first in a series of World Bank reports that seeks to establish the global economic costs of gender inequality, and it concentrates on losses in lifetime earnings. The World Bank maintains that gender gaps in educational attainment as well as discrimination and social norms result in women being less likely to join the wage labour force. When they do, it states, they are more likely to work part-time and in the informal sector, and to be paid less. This in turn decreases their bargaining power and voice.

The World Bank points out that globally, women account for a mere 38 per cent of human capital wealth, compared to 62 per cent for men. It estimates that gender inequality in earnings could lead to losses in wealth of USD 23,620 per person globally, but explains that losses in wealth based on gender equality tend to increase in absolute values with economic development. Correspondingly, losses in absolute terms are largest in the relatively wealthy member countries of the Organisation for Economic Co-operation and Development (OECD). If women were to earn as much as men, for the 141 countries analysed in the study, the World Bank reckons that human capital could increase by 21.7 per cent globally, and total wealth by 14 per cent.

The World Bank’s report highlights the issue of girls getting married before the age of 18, and points out that children of young and poorly educated mothers face higher risks not only of dying by the age of five or being malnourished but also of doing poorly at school. It argues that achieving gender equality would greatly improve women and girls’ welfare and agency, in turn benefiting both their households and communities and their countries’ development prospects.

Also taking the target year of 2025, the McKinsey Global Institute (MGI) report “The power of parity: How advancing women’s equality can add $ 12 trillion to economic growth” sets out from a “best in region” scenario to demonstrate that if all countries were to catch up with their best-performing regional neighbours in terms of achieving gender parity, this could indeed result in a huge boost to the economy. And in a “full potential” scenario, in which men and women play an identical role in the economy, parity would add up to USD 28 trillion, roughly the equivalent of the US and Chinese economies combined, to global GDP by 2025.

According to the MGI survey, effective action could move more than 75 per cent of women affected by gender inequality closer to parity in areas such as time spent in unpaid care work, political underrepresentation, violence against women, low maternal and reproductive health, unequal education levels or financial exclusion. The MGI maintains that six types of intervention are needed to bridge the gender gap: financial incentives and support, technology and infrastructure, the creation of economic opportunity, capacity building, advocacy and shaping attitudes, and laws, policies and regulations. It stresses that the private sector will have to play a more active role and co-operate with governments and non-governmental organisations in tackling gender inequality. However, it also maintains that companies could benefit both directly and indirectly by taking action.

Both advanced and developing countries could gain from promoting gender equality. Based on the best-in-region scenario, compared to business-as-usual, in 46 countries, annual GDP could increase by more than ten per cent, with the highest boosts in India and Latin America.

Mike Gardner is a freelance journalist specialising in development,
environmental and higher education issues,
and is German Correspondent for UniversityWorldNews.
Contact: mike.gardner@zaehlwerk.net