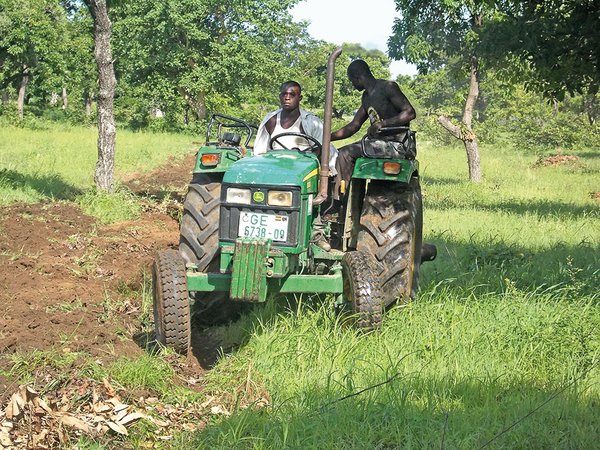 Few operators have formal training. Most of them learn from the “master” while sitting on the back of the tractor as a “boy”.
Photo: T. Daum

Demand for mechanisation is growing again in many African countries. Not only has this been recognised by development cooperation and the private sector. Governments are launching corresponding programmes, too. But have lessons been learnt from the mistakes of the 1960s and 1970s, when state-led mechanisation efforts failed miserably? And what organisational concepts are needed to support sustainable mechanisation which also benefits small farmers? The author describes experiences in Ghana.

Whereas many regions in the developing world have made substantial progress in mechanisation during the last decades, sub-Saharan-Africa is characterised by persistent low levels of mechanisation (1.3 tractors in use per 1,000 ha). This is remarkable because the spread of mechanisation was taken for granted in the 1960s. Both colonial and newly independent countries spent large amounts importing tractors, providing hire services and running state farms. In their efforts, they were assisted by bi- and multilateral aid agreements. However, despite high hopes and big efforts mechanisation rates did not increase sustainably, and these efforts “produced a miserable track record” (Food and Agriculture Organization of the United Nations). Why did these schemes fail so miserably?

Lessons from the past

Ghana may serve as an example. The government imported 10,000 tractors between the 1960s and the 1980s. Most tractors were sooner or later abandoned as qualified operators, technicians and fuel were missing. As a functioning spare part supply was lacking, tractors were also “cannibalised” for spare parts. In general, programmes were successful importing machinery, but failed to prove sustainable after the first stock of spare parts was used and after training programmes ended. Moreover, they were characterised by mismanagement, rent-seeking behaviour and erratic financial support. In addition, scholars argued that there was no actual demand for mechanisation, as e.g. shifting cultivation does not allow for ploughing, nor does it create a need for it. Consequently, mechanisation disappeared from the development agenda.

Yet, mechanisation is now back on it as trends such as rural-urban migration, industrialisation and farm system evolution have created strong labour bottlenecks for land preparation in various African countries. Unlike during past mechanisation efforts, smallholders (in Ghana, 60 per cent depend on hired labour) actually do demand mechanisation services. Acknowledging this demand, in 2003, the government of Ghana started importing machinery for individual farmers on a large scale. Also, between 2007 and 2011, the government set up 89 public-private mechanisation service centres (AMSEC) – each of them receiving between three and seven tractors in order to offer services to farmers. The entrepreneurs running the centres paid one third of the actual price of the tractors – and 10 to 20 per cent as a down payment (sometimes a mere 1,000 US dollars [USD] for one tractor). In total, the government imported 3,000 tractors in the last decade. Public spending includes e.g. a 95 million USD agreement with Brazil. Interestingly, in parallel to this heavily subsidised state-led programme, a vibrant market of second-hand machinery evolved under which 3,000 tractors were imported during the last decade. This raises two major questions: Has the state learnt from the past? Moreover, what institutions are needed to support sustainable mechanisation?

Some success, but old problems persist

Although the government praises the AMSEC programme, the evidence is at best mixed. There are AMSECs that work smoothly. One example is the Nso Nyame Ye Women’s Group in Ejura (Ashanti), which became one of the first AMSEC, and preferentially serves small and female farmers. On the other hand, the selection process of the AMSECs was not transparent, some AMSECs only exist on paper, and tractors have reportedly been used to benefit party members and friends or have been captured by politicians. Moreover, some AMSEC entrepreneurs who own land themselves use the subsidised tractors received mainly to plough their own fields. In general, the acreage ploughed per year often declined due to frequent breakdowns because of a lack of maintenance, qualified operators and technicians, and spare parts. Some AMSECs concentrate their capacities on the most “promising” tractors received. For example, out of 500 imported John Deere tractors in 2008, six years later, only 200 were still in operation. These problems sound very familiar and resemble the reasons that contributed to the failures of past state-led programmes.

One of the underlying problems of these programmes is the way in which they are funded. Most imports were financed with concessional loan agreements – with emerging countries such as Brazil and India (South-South Cooperation) – which are contested because they are a type of conditional aid. Consequently, the imported brands (mainly Farmtrac, John Deere and Mahindra) changed frequently (as they must often come from the donor country), which hindered the development of a spare-parts supply chain. While farmers purchasing their own used tractors include the accessibility to and affordability of spare parts in their decision-making and mostly demand Massey Ferguson and Ford (30–85 hp), the beneficiaries of government tractors did not have this choice.

Used tractors come from across Europe and are often old and in poor condition – frequently, two old tractors are used to create one new one. The dealers charge approximately 10,000 USD. Yet, while the used tractor market was booming during the last decade, it was heavily hit by the recent depreciation of the Ghanaian Cedi. The Cedi was on parity with the US dollar in 2008, but had devaluated to almost 4 Cedi for 1 USD by August 2014.

Used tractors are mostly financed with personal savings or credits given by relatives working in cities (sometimes also in illegal gold mining). Banks are reluctant to lend to agriculture because of negative experiences, missing collaterals (80 per cent of the land is held under customary tenure without titles), weather risks, and missing expertise on how to finance agricultural machinery. The application for credit is tedious, repayment is stringent, and the repayment period (12 to 24 months) is not sufficient to finance a tractor. Moreover, the interest rate is high (up to 35 per cent per year). Some banks accept the tractor to be financed as collateral (with a down payment of 30 per cent), but this happens at a rather anecdotal level. Microfinance is only slowly turning to the “rural frontier and to the thorny challenges of financing small-scale agriculture” (International Fund for Agricultural Development), and has not yet become an option to finance a tractor.

There are various manufacturers in Ghana who produce agro-processing equipment that can be used on farms (e.g., maize shellers and rice mills). About one third of the tractor owners in Ghana own maize shellers, as providing these services is highly profitable. They are paid on the spot and in kind with one bag of maize for every 10 bags shelled. A maize sheller costs between 700 and 1,600 USD. The quality varies greatly and is often difficult to assess beforehand, as there are no standards or certification. Although local manufacturers have triggered development in other countries, they are not supported by the government and not included in government tenders.

The provision of tractor services (i.e. ploughing, maize shelling and transport) is organised around medium and large farmers (10–40 ha) owning tractors and a surprisingly large number of non-farmers (e.g. former extension officers, teachers, shop owners) who see the provision of services as a profitable investment. Ploughing charges vary between 40 and 60 USD per ha. 71 per cent of the tractor owners possess more than 20 ha, and only 4 per cent less than 5 ha (on average 39 ha). Service providers plough between 80 and 350 ha per season and service between 50 and 300 farmers. Yet, they (both private and AMSEC) are often reluctant to serve small farms, because their fields are small, fragmented, spatially dispersed and frequently full of tree stumps and stones. At the same time, there is enough unmet demand from bigger landholdings with better conditions for ploughing. This is alarming as excluding smallholders from mechanisation can lead to an unequal distribution of income and land that is difficult to reverse. Moreover, smallholders waiting for their fields to be ploughed risk a sharp drop in their yields if ploughing (and sowing) is done too late. Besides, smallholders have to accept low qualities of ploughing because their bargaining power is weak and because they do not have other options and are content with being served at all. Women are marginalised because they own rather small plots and low quality land and because tractor owners and operators are mostly male. Some smallholders form groups to address service providers jointly, which reduces transaction costs, improves access to services and increases their bargaining power.

The provision of ploughing services is only profitable if there are no serious breakdowns because the ploughing season is short (45 days in the North), and because it takes several days or weeks to repair a breakdown as access to technicians is limited. Moreover, most technicians are “roadside technicians” who have no formal training. Repairs are often improvised (given the lack of spare parts) and done on a trial-and-error basis. Similarly, few tractor operators have formal training (or a driving licence). Most have learnt from a “master” while sitting on the back of a tractor as a “boy”. Consequently, the quality of ploughing is limited. This problem is exacerbated because operators are paid per acre ploughed and, therefore, have incentives to work as fast as possible. They often do not plough in the apt depth, and do not thoroughly cover weeds, and the furrows are not straight. Moreover, operators regularly plough along the slope and adjust their disc ploughs diagonal to cover a larger area, which exacerbates the problem of soil erosion and degradation. This is reminiscent of the “Dust Bowl” in the USA in the 1930s, the socio-economic consequences (including mass migration) of which are illustrated in “The Grapes of Wrath” by nobel laureate John Steinbeck (1939). In many regions, Conservation Agriculture, which entails the principals of soil cover, minimal soil disturbance and crop rotation in order to conserve soils, could be the best choice, but it is rarely practised.

To sum up, mechanisation efforts in Ghana are driven by the rationale that it is the government’s task to make tractors available to farmers. Thereby, major lessons from the past are however not considered. Instead of focusing on the supply of subsidised machinery, the government could be more effective by providing the public goods and services to support the emerging private tractor market. This includes training facilities for technicians and operators. Training could be provided by private organisations with quality assurance by the government, and it could combine the advantages of formal and informal hands on the job training. Moreover, loans to the AMSEC could be made conditional on the servicing of small farmers or on the use of non-till equipment. Experiences from other countries show that creating conducive institutions and policies is more successful than government imports of machinery. In India, for instance, farmers themselves who were ready to invest in machinery drove mechanisation, while the mechanisation policy focused on the provision of public goods and subsidised credit and on creating a conducive business environment.

Banks are reluctant to lend to farmers and have high interest rates. To address this problem, Danish Development Cooperation (DANIDA) set up a loan guarantee scheme (10.9 million USD). DANIDA covers 50 per cent of the default costs of three participating banks, when the banks finance agricultural machinery and when farmers work with outgrowers. This allows the banks to reduce their interest rate (e.g. from more than 30 per cent to 18 per cent). Yet, banks still lose 50 per cent in the case of default and have an incentive to ensure that clients do not default. Some banks cooperate with tractor dealers who cover some part of the interest rate if the tractors to be financed are theirs. Farmers can spread the annual amount of repayment over five self-chosen dates per year and decide themselves which types of machinery (with regard to quality, size, and price and after-sales service) they want to finance.