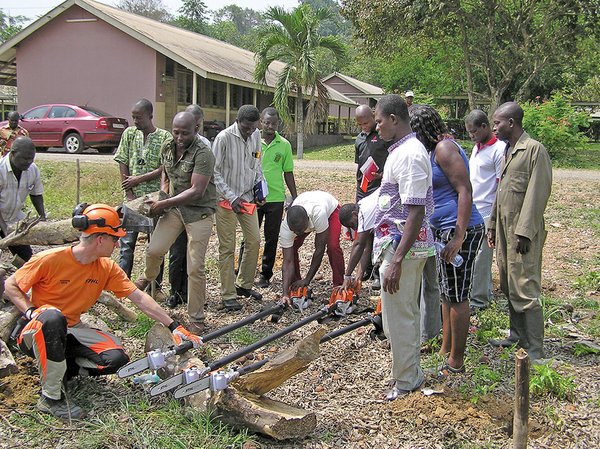 The participants of the training course get acquainted with the pole pruners. The training has to combine elements of machine handling and maintenance as well as correct pruning of the cocoa trees.
Photo: J. Soth

Sorting out the cocoa maze with pole pruners

A simple pruning machine could help West African smallholders maintain healthy cocoa plantations and enhance yields. However, a pilot project has shown that if innovation is to bear fruit on a sustainable basis, right from the start, education and training is just as important as looking for the right implementation model.

Cocoa producing countries all over the world face similar challenges: An over-aging rural population is maintaining over-aging cocoa plantations. Productivity is low and farmers hardly have the chance to develop out of poverty. The factors contributing to this low productivity are little or no investments into inputs, no replanting and neglect of the plantation. Once the plantation has reached a low level of yields, it is very difficult to convince the farmers to engage themselves again in cocoa farming. In light of these challenges actors from an organic cocoa project in Ghana decided to take direct action. The Swiss State Secretariat of Economic Affairs (SECO) encouraged stakeholders to look for creative solutions to combat the particularly challenging aspect of neglected plantations and supported the identified innovation financially.

In neglected plantations, trees have frequently grown taller than 6 metres, whereas around 2.5–3 metres is regarded as reasonable height for a well-maintained plantation that is easy to manage and harvest. In a neglected plantation canopies form a “maze” of cocoa tree branches and epiphytic plants like mistletoes. Since light, air and sun hardly reach the plantation, fungus diseases occur frequently. Unsurprisingly, the yields in such plantations are disappointingly low. 250–400 kg of dried cocoa beans per hectare is reported as typical for the Eastern region in Ghana, whereas the potential of a well-managed plantation can be around 1 ton or even more.

Hand-tools for pruning do exist, and their use is being taught by several cocoa research and extension organisations throughout West Africa. Nevertheless, the adoption rate of systematic pruning activities by farmers is extremely low, and most of the trees remain unpruned. The work with hand tools is tedious, and at the end of a tough pruning day, progress in the plantation is frustratingly hard to see. The innovation of the mentioned cocoa project was to initiate an experiment with mechanised pruning machines. The German company Stihl, recognised for their quality tools for forestry and gardening, had developed small and robust chain saws (the blade is just 30 cm long) on a 3.5 metre shaft. Originally invented for forestry, these so-called pole pruners turned out to be light and easy to handle in dense cocoa plantations. Unlike hand tools, they allow different sizes of branches to be cut rapidly and large amounts of epiphytic biomass to be removed even when difficult to access. Avoidance of any climbing increases the efficiency of the operations and their safety. But as with many mechanisation innovations, the pole pruners themselves are only one component in a complex socio-economic and institutional setting. The project actors were aware of the essential role of education and training from the very beginning. Therefore many actors joined forces to organise a training course for 14 participants from farmer-based organisations, Yayra Glover Ltd (the company implementing the mentioned organic cocoa project) and from the governmental cocoa extension service. The course had to master the challenge of balancing the gaining of experience on the machines with profound knowledge of cocoa pruning and machine maintenance. Four days were deemed suitable to teach these practical and theoretical elements in order to prepare the participants for their first real-life mechanical pruning season.

Sixty farms from the Yayra Glover organic cocoa project were selected from a much higher number of farmers willing to participate as pilots to be pruned after the harvesting season 2013/2014. Smallholders are well aware that their plantation management is sub-optimal and appreciate any help coming from familiar and reliable partners.

Since cocoa trees need more than one vegetation period to recover from a radical pruning intervention, only half of the acreage of any of the participating farms was pruned, with the other half to be left unpruned. One reason was that farmers should still have the opportunity to generate income from the unpruned acreage in the season following the pruning. The other reason was the better comparability of the pruning results on the farm itself. Whereas the full results regarding the reduction of fungus disease infestation and productivity gains will only be quantifiable after the harvesting season 2015/2016 (the evaluation report of the SECO funded project will compile these results), the participating farmers as well as many other project farmers are asking for mechanised pruning options. They know their plantations well enough to be aware of the long-term benefits even though the detailed results of the pilot are not yet available.

The pilot has already turned out to be very successful from the point of view of efficiency of the machines in comparison to hand implements. In a period of 20 working days, three trained teams of two people each took turns operating the machines and managed a stunning amount of 23,000 pruned trees, reaching an average of 45 to 65 trees per hour per team. Of cause the state of neglect among plantations varies considerably, limiting the transferability of this average figure. Nevertheless, one can conclude that the pole pruners can reach an approximate tenfold increase in the effectiveness of pruning operations as compared to hand-tools. Furthermore the pilot revealed the success of the thoughtful training. Throughout the entire pilot phase and despite the intensive use of the machines, there has not been any damage to the machines beyond the usual wear of chains and guide bars.

Based on the encouraging results of this pilot, the project partners developed three different models of how the mechanised pruning could be implemented on a wider scale on smallholder cocoa farms in West Africa. Whereas buying a machine for the average one-hectare plantation would mean considerable over-mechanisation and would by no means be affordable to smallholders, the following models were developed with a view to the social and organisational contexts in which such a mechanisation could work:

Farmer group model. A farmer-based organisation buys a machine jointly. Several people in the group are trained in machine handling, maintenance and pruning. However, this model requires an established and well-organised farmer group.

Rural service centre. Small businesses are created that could offer pruning as a payable service to the surrounding smallholder farms. The interesting aspect is that such a micro-enterprise could offer much more than pruning alone. One could think of land preparation and cleaning for new plantations, selling tree seedlings or providing plant protection services. Since the ideal pruning phases are limited time windows during a vegetation period, such a broader range of services might be very suitable. This model requires a good understanding of agronomics on a cocoa farm to find suitable price ranges for the various services that are accepted and embraced by the farmers.

Service by the licensed buying company. The company licensed to buy cocoa in a region could also have trained teams moving from village to village to perform the pruning as a service to “their” farmers. Indeed, the companies are looking for such additional benefits to raise farmers’ loyalty towards them. Nevertheless, this model bears the risk that farmers could be selling to other companies and the investment of pruning teams would be lost. This is the model practised right now by Yayra Glover Ltd. Since they have made efforts to establish a trustful relation to the farmers for years, they can offer this service without having to fear that the farmers are selling aside.

Regardless of advantages and challenges of these different models, the pilot also revealed another big opportunity for such a mechanisation approach: the idea of a professional plantation or pruning service creates a new vision for young people to engage in the cocoa sector. In many rural areas the temptation for young people to migrate to the cities is high, even though the outlook for reasonable job opportunities might be grim. A concept of a new profession that is not only economically interesting, but also locally appreciated, will be a very welcome element for the social cohesion in the rural areas of the West African cocoa belt.

Innovations within the development sector that are truly embedded in the local context require thoughtful collaboration between many actors. Though looking simple, the training and implementation for the described introduction of pole pruners requires contributions from the following actors:

Cocoa Research Institute Ghana (CRIG): The Institute is the research arm of the Ghanaian Cocoa Board and runs facilities for all kinds of education and trainings around the cocoa sector. The described training took place at the Institute’s Bonsu College in the Eastern Region of Ghana, which was sufficiently close to cocoa farms to ensure that the training could contain practical elements of work in the plantations.
CRIG provided highly experienced instructors who could explain the biology of the cocoa plantation and the resulting principles of pruning.
More information: https://cocobod.gh/oursubsidiaries.php

Andreas Stihl & Co KG, Germany: The company produces a wide range of machines and tools for forestry and gardening recognised for their practicability and robustness.
Stihl contributed a highly experienced instructor to the training who knows the working conditions in African countries and the resulting requirements extremely well to train the most relevant aspects of the machine in a short period.
More information: http://www.stihl.com/about-stihl.aspx

C. Woermann, Germany: The company is the licensed importer to West Africa for recognised technology brands like Stihl. They helped to conduct the initial trials with the pole pruners in cocoa plantations and thereby facilitate the decision to start the training on the machines.
During the pilot their team supervised the use of the machines and the supply of consumable items like chains, oil and correct fuel.
More information: http://www.c-woermann.com/en/germany/company/?cid=25

HELVETAS Swiss Intercooperation: This Swiss NGO is implementing development projects oriented on the vision of a just world in which all men and women determine the course of their lives in dignity and security, using environmental resources in a sustainable manner. They contributed to the cocoa project with technical assistance, developed the idea to utilise pole pruners and crafted together the didactics of the training.
More information: www.helvetas.org

Swiss State Secretariat of Economic Affairs SECO: Through its economic co-operation with middle-income developing countries and with former Eastern Bloc and Central Asian states, SECO seeks to ease its partner countries' integration into the world economy and promote economic growth that is socially responsible as well as environmentally and climate-friendly.
SECO supports the project to up-scale organic cocoa in Ghana with a Public-Private Partnership approach. The local SECO office in Ghana helped to co-ordinate the realisation of the training course with the Ghana Cocoa Board.
More information:
http://www.seco-cooperation.admin.ch/org/index.html?lang=en
SECO in Ghana: http://www.seco-cooperation.admin.ch/laender/05148/05157/index.html?lang=en