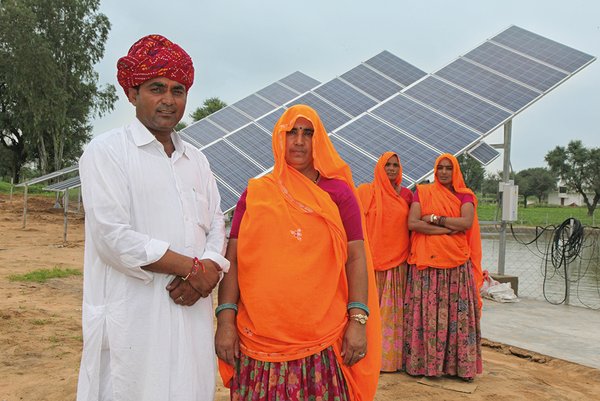 In Rajasthan, the government programme has supported 16,000 farmers with installing solar warer pumps on their farms, accounting for 40 per cent of the country’s installations.
Photo: Dr D. Goyal

With dropping groundwater tables and increasing need for energy for irrigation, solar pumps in combination with drip irrigation is the way ahead for farmers in India. More and more farmers are opting for this type of mechanisation – whether with or without government subsidies.

Vena Rangaswamy from Erasi village, Theni district of Tamilnadu, is more popularly known as ‘Solar Rangaswamy’ in his village. His new identity came from the installation of solar-powered pumps in his farm. About three years back, Rangaswamy was in dire need of additional power supply. He applied for a further electricity connection from the state electricity board – which would cost him 400,000 rupees (Rs) (6,292 US dollars). “Even if I had decided to take that connection, I would have had to wait for it, but I needed power immediately,” he says. “I then read about solar pumps in Gujarat through a local agriculture magazine and thought: Why can’t we install this here?” The farmer had a drip irrigation system established in his farm 15 years previously because of falling groundwater tables, so a solar pump made sense. Along with drip irrigation, he uses fertigation, a process where fertilisers are sent to the roots of the plants through drip. “The soil is loose with the drip irrigation, and the weed is controlled from the root,” Rangaswamy maintains. “I saved almost 96 per cent water with drip irrigation.” Many farmers in his village have now installed solar-powered pumps and use drip irrigation to maximise the simultaneous benefit of both these techniques.

The United Nations states that agriculture is the largest user of water, accounting for 70 per cent of freshwater withdrawals. Further, powering the necessary pumps on 300 million irrigated hectares consumes 62 terra watt hours (TWh) a year. Manufacturing and delivery of irrigation equipment consumes another 62 TWh. Hence, 112 million ha or so globally irrigated by groundwater accounts for most of the energy used for irrigation.

The desert state of Rajasthan has just one per cent of India’s total surface water resources, yet it holds about 40 per cent of the country’s solar pump installations. Its entire population depends on agriculture or horticulture for a living. However, this is often deterred by low productivity because of unreliable, inadequate or unavailable irrigation. Around 60,000 farmers are still on a waiting list to get grid-based electricity connections for irrigation, which could take them another two to three years. As 70 per cent of the state is desert, extension of the electric grid is not feasible in distant areas. Moreover, the groundwater level has dropped severely in the last two dec-ades. However, the state has a maximum of 325 sunny days a year, a perfect precondition for solar power.

“Power and water issues have always been there. In a state like Rajasthan, even diesel pumps don’t function properly. Then we thought: why not solar?” Dinesh Goyal, former Additional Chief Secretary of the Government of Rajasthan, explains. At the farmer’s end, an electricity connection is cheaper than solar pumps or diesel pumps because of the existing subsidies on agricultural power supply. However, in cases where farms are scattered and far off from settlements, the electricity provider has to create the infrastructure to reach the farm, which can cost the farmer hundreds of thousands of rupees.

In 2011, the Rajasthan government started a programme to provide decentralised solar power to farmers. Farms seeking to participate had to meet three conditions. First, a water harvesting structure (harvesting/storage structure / groundwater up to 75 m) and a farm size of at least 0.5 ha. Second, drip irrigation was compulsory, and third, horticultural crops had to be grown. “The intention was to bring the farmers out of poverty with cash crops and improve sustainable development,” Goyal explains.

The farmers did not have any second thoughts. However, they were worried about having to pay a lot for the solar pumps. “The normal diesel pump cost Rs 60,000–70,000, and the solar pump Rs 500,000”, says Goyal. “The farmers said they could pay as much as 14 per cent of the total cost.” The Ministry of New and Renewable Energy (MNRE) was giving roughly 30 per cent subsidy for the solar pumps. “We looked at how the remaining 56 per cent could be raised,” says Goyal. After a lot of discussions and convincing, Rajasthan Kisan Vikas Yojana (RKVY) – the National Agricultural Development Scheme – offered to sanction the rest.

The installation for the drip irrigation system was subsidised by the National Mission on Micro Irrigation (NMMI). The cost of drip irrigation varies depending on the type of crop, spacing and the area covered. For instance, coconut in 7.5 x 7.5 metre spacing would cost Rs 25,000 per hectare in Tamilnadu. According to this scheme, 50 per cent subsidy is given to farmers, with Central government bearing 40 per cent of the cost and state government bearing 10 per cent. The remaining is borne by the farmer.

The farmers had to prove their interest in the scheme by depositing Rs 10,000. Since 70 per cent of the investment was on the panels, bids were invited from manufacturing companies. The farmers could then select the manufacturer for installing their solar pump. This also gave them the opportunity to talk to the manufacturers about the product in detail. The International Horticulture Innovation and Training Centre (IHITC) in Jaipur provided them with free training on using the systems. This training also offered a platform for farmers to interact and share best agricultural practices with each other. About 100–200 farmers participated in the training. According to an assessment report, “more than 50 per cent of the farmers were able to recover the invested amount in one to two years … All farmers are satisfied with the performance of the solar pump(s).”

Farmers and the environment are benefiting

The water collected in individual or community farm ponds or storage tanks during the monsoon is used for irrigation, drinking, livestock and other domestic purposes. Water is also stored for a second crop in winter. It is estimated that 17,169 hectares of additional land was brought under irrigation with this scheme in 2012–13. Many farmers even have three crops, and they have diversified to more remunerative horticulture. Additionally, two crops are grown each year, rather than having just one monsoon-fed crop over a whole year. This scheme is still working, but at a slower pace than 2013.

A survey over the 2012–13 season shows that the switch to compulsory drip irrigation has saved 48 million cubic metres of water a year in Rajasthan. Also, 2.4 million litres of diesel, Rs 24 million diesel subsidy and Rs 48 million in foreign exchange has been saved with the combination of solar-drip (also see box at the end of the article). The beneficiary farmers have saved between Rs 3,000 and 67,000 per annum thanks to using solar pumps instead of electric or diesel pumps. These savings are likely to accrue over the life span of the solar pump, as electricity and diesel prices are expected to rise continuously. Many women farmers participated in the scheme. They attended the training programmes from IHITC and received certificates as well. Under this programme, the drip irrigation system has been used in about 34,338 hectares of irrigated land in Rajasthan. Migrating from flood irrigation to drip irrigation has saved about 3,000 cubic metres of water per hectare per annum (also see box on page 24). Hence, the total water saving has been 103 million cubic metres a year for 34,338 hectares of land. This had an influence on energy requirements for pumping out groundwater. Drip irrigation has resulted in improved usage of harvested water for farmers, allowing them to irrigate two or three crops in a year. Moreover, most farmers have not even opened the control box of their motors after installation of the solar pumps; they do not have to go and manually switch the pump on and off, which also saves time.

The synergy between harvesting, solar drip and irrigation also applies to Kana Ram Yadav. The farmer used to grow wheat twice a year along with mustard, baby pumpkin and onion in about 1.5 hectare of land. He had two electric pumps of capacities 7.5 hp and 10 hp to draw water from tube wells. His monthly electricity bill was about Rs 1,600 (flat-rate subsidised connection). Now, with this programme, he has a solar water pump of 3,000 W installed on his farm. He also has a water harvesting system of 1,200,000 litres capacity. This sufficiently irrigates his newly created poly-house through drip irrigation and also supplies water to foggers. He uses mulching in a roughly one hectare area of his farm. He now grows exotic cucumber in his poly-house spread across 0.4 hectare and produces about 40–50 tonnes of it a season, twice a year, earning a total income of about Rs 1,200,000 per annum. This is more than five times what he used to earn from wheat earlier. Other technological initiatives have also helped him reduce labour requirement to about 75 per cent.
Both Kana Ram Yadav and Vena Rangaswamy have largely benefited from solar-drip integration to mitigate power and water issues. The only difference is that while horticulture farmers in Rajasthan have been supported by extensive subsidies from the state government, in states such as Tamilnadu, despite subsidies of up to 80 per cent being offered by the state government, many farmers have set up solar-powered pumps through private business houses. They feel that rather than waiting in long queues to obtain subsidies or new connection, they would prefer to get solar panels installed on their own. For Rangaswamy, getting the bank loan was easy as he had a good credit record. Spending a modest Rs 525,000 on a 5 hp pump, his immediate needs were answered, and solar panels were in his farm within a week.

Solar panels can also be used in innovative ways to suit the needs of farmers. For instance, in a farm at Perur, near Coimbatore, in Tamilnadu, a small pond is connected to a solar-powered pump. This pump draws water from the pond that is sent to the farm through drip irrigation to grow coconuts, small onions and sugarcane. When the pond is dry, the motor switches off automatically. Earlier, the farm was mainly irrigated through power supply from the electricity board. When the water was drawn from the pond for irrigation, there was pressure on conventional power from the electricity board. To reduce this pressure, the farm installed a 5 hp solar-powered pump and it helped. Also, the water savings go up to 36,000 litres per hour, according to Jai Shankar, who takes care of the farm.
There is no doubt that the solar-drip combination is looked upon as a boon by farmers. This solution will help them and the government in the long run as we would otherwise face energy and water crises in the future. Steps are taken by the government to ensure that funds are allocated to such projects. Recently, the finance ministry of the Indian government announced setting up of 100,000 solar pumps in the 2014–15 budget. “This is a positive sign and a great beginning to push the use of solar pumps in India,” Dinesh Goyal says. 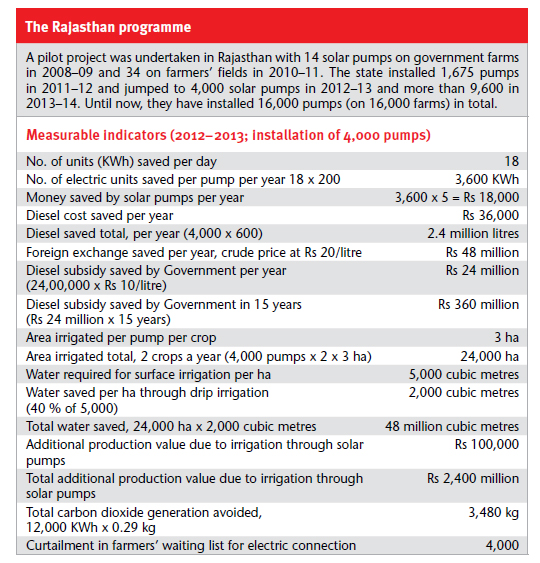