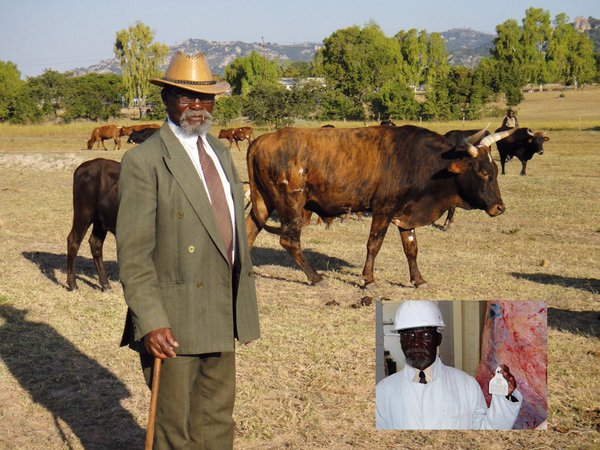 Gratiano has shared his experience in several meetings, always praising the advantages farmers could get out of the new feeding scheme. This has enabled him to encourage numerous other livestock keepers.
Photo: R. Behrens

Zimbabwe used to be well-known for its high-quality meat exports. The sector was hard hit by the economic crisis that set in during the 1990s and coincided with the impact of a failed land reform and recurrent drought. Now, a new livestock-fattening scheme is to contribute to the survival of the branch and help resource-poor smallholders earn a living by marketing their meat.

Gratiano Kariba Marema is 75 years old and does not really look like a typical Zimbabwean smallholder farmer. Wearing suit and tie and a hat, he is showing us his cattle in a bigger herd on free grazing. “I am too old to do farming. I concentrate on livestock,” he says. He remembers the old days when Zimbabwean meat was exported world-wide, and he hopes to participate in the revival of the sector in the country. He was one of the first farmers to adhere to a livestock fattening pilot scheme in sales pens at Chivaka village in Bikita district in 2012. This public-private partnership venture is being run by Deutsche Gesellschaft für Internationale Zusammenarbeit (GIZ) in co-operation with a private slaughterhouse, Montana Meats (see Box on page 42). In 2012, 32 farmers participated in the venture, with a total of 49 animals; in 2013, a further 40 livestock owners joined the scheme.

The importance of cattle

Zimbabwe used to be the breadbasket of southern Africa. High-quality meat was exported even to Europe. The economic decline exacerbated by recurrent droughts did not leave the livestock sector out. It is struggling to improve as the overall situation gets better, but it needs re-orienting from what were formerly a few big and efficient cattle farms towards producers comprising many resource-poor smallholders.

Bikita District in Masvingo Province in the southeast of Zimbabwe is mainly (85 %) composed of natural regions IV (450 to 650 mm annual precipitation) and V (less than 450 mm) and is very mountainous. The soils are particularly poor, sandy and rocky. Rainfalls in the region are erratic. Therefore, it is not advisable to cultivate maize or other crops. Livestock should be the main source of rural income in this area, but even this faces a lot of problems. The type of grass (couch grass, spear grass) is not ideal to feed cattle. Buffalo bean is a common indigenous climber that irritates the skin of cattle, which hinders good development. The type of cattle introduced, “Brahman” and “Africander”, do not really fit into this area as they are not adapted to local conditions. The local “Mashona” race would be the best option, although most animals are crossbreeds that get by on the whole.

Cattle are used for ploughing, logging, and transport of goods or people. One very important aspect is the “lobola”, the price a young man has to pay to get married to a wife. Even if the women dies and the husband did not pay cattle to her parents, he must do so before she is buried. Traditionally, cattle are slaughtered in August for hero’s holidays, an important celebration remembering the fallen heroes in the liberation war, and for Christmas and New Year celebrations, when families gather together. Cattle also represent savings for most of the people, and are commonly known as the farmer’s bank, which of course is not commercialised.

Throughout the year, but especially in the winter, a large proportion of the cattle delivered to abattoirs are not ready for slaughter. They lose condition starting from August up to November, when the rains start again. With the new green grass, they get better until April/May. Then both fodder and water become scarce. As, in general, cattle are only sold when the farmer requires cash, the animals delivered to abattoirs are of a poorer grade than they could be if they were considered as a revenue-generating resource rather than as a cash reserve. Consequently, the consumer is also adversely affected.

The GIZ Food Security and Livelihood Project has been working in Bikita since October 2011. The interventions mostly cover poor rainfall areas with less than 650 mm of annual precipitation. Livestock rearing is recommended for these areas, but farmers still grow maize and other crops. The limitations for livestock are water from June to November coupled with restricted pasture from August to November. Cattle lose weight and value, and some even die. The GIZ project supports the repair of dams and building of weirs and bush pumps that help solve the water problem. The support given to the feed pens is one way of reducing the pressure on the pasture through overstocking.

Due to the scarcity of natural pasture in August 2012, the GIZ project decided to contact the company Montana Meats, which had started a pen-fattening scheme in the neighbouring Zaka district in June 2012. A similar pilot was established in Bikita District.

Who is doing what?

Cattle are put in the pens for 60 to 90 days depending on their age and condition at inception. The younger ones and the highly emaciated stay longer. They are inducted using “Bimectin” injections, which will cure the worms, and a tag is put in the ear and a brand on the skin to identify the animals. This is paid by Montana Meats. The food, supplied by the private feed company National Foods, consists of molasses, yellow maize, cotton seed cake, grass, sugar cane, urea and others. This year, hay has been added to the diet to improve the fibre intake. It seems to be very convenient for the cattle.

Feeding and care remain in the hands of the farmers, as does ownership of the cattle until slaughter. They are assisted by a permanent caretaker employed by Montana Meats. The company also pre-finances the feed. A beast consumes dry matter which is equivalent to three per cent of its body mass daily. The weight increases by one to two kg per day, and meat quality improves very much. Normally, cattle are on free range from June 1st and just feed on the scarce natural vegetation, so that they would not be marketable in the winter (dry season). Finally, Montana Meats pay Harare prices on the day of slaughter, in cash. Prices vary, going up from June to December and decreasing from January to May.
Each animal needs about 50 litres of water per day. Currently, GIZ is supporting Bikita district with the repair of two feedlots and assisting in water supply. In Chivaka, a former sales pen has been repaired. Water is pumped from the river by a mobile diesel pump; a weir will be constructed to store water over the dry season. In Demba village, 50 km away from Chivaka, another sales pen is being repaired, and a solar pump will be fixed on an existing borehole to provide water for the cattle. In the southern isolated Ward 1 (the Ward is the smallest administrative unit) water is supplied by a diesel engine installed to serve a rural health station. All three stations together in Bikita can accommodate cattle from about 150 farmers.

Co-operation with the private sector will be extended to four other districts through an EU-financed agriculture extension component. Less investment is to take place in reconstruction and water supply in these districts, but more emphasis will be put on training of extension field staff, whereby cattle marketing is only one aspect of overall marketing training.

The next step is to include goats in the feeding schemes. GIZ has started a goat improvement programme. Twenty male Boer goats (a breed of goat that was developed in South Africa in the early 1990s for meat production) and 22 Boer goat cross-bred females were introduced in May 2013 as the base of the activity. Currently, most goats are not really being commercially bred in Zimbabwe, inbreeding takes place, and the animals are becoming smaller and smaller each generation. Since the beginning of the activity, 20 goat clubs have been formed by the project and are trained by Taonga Mzezewa, the livestock adviser from Sustainable Agriculture Technology, a private Zimbabwean NGO and implementation partner of the project, in co-operation with members of the line ministries, LPD (Livestock Production Department) and the Veterinary Department. The aim is not only to supply breeding stock, but to induce a sustainable, economically viable development in the sector. It is envisaged that the clubs exchange their bucks amongst themselves and, later, to others to boost the sector’s revival. There already is a strong market for goat meat in Bulawayo, the second largest city after the capital Harare and located in the southwest of the country, but there is no supply at all in Masvingo Province, in the southeast. Therefore, Montana Meats have expressed interest in joining the scheme. The modalities of co-operation have yet to be worked out. The goat programme is set for three years.

Back to the farmer

Gratiano himself had put in nine cattle of his own stock. When the cattle from the pilot project were slaughtered in November 2012, he was present to check that everything went right. Ultimately, some cows fetched more than 1,000 US dollars after fattening, while only one had a loss of 125 US dollars after deduction of cost for food. This had been a poor animal from the beginning and could not convert the feed. Nevertheless, without feeding the animal was not marketable. At the time of induction, Gratiano’s nine animals had a (slaughterhouse) value of 3,420 US dollars. After two months of feeding, their value had increased to 7,253 US dollars (USD). The feed cost for 9 tonnes at 265 USD per tonne was at 2,250 USD, leaving Gratiano with a profit of 1,298 USD after deduction of costs for inspection and transport. A rural worker earns 5 US dollars a day in Zimbabwe.

When asked why he was actively promoting the scheme, Gratiano replied: “If I had not done this, some of my animals could have died. Their value would certainly have decreased during the dry season. The action was very profitable for me, and I will continue with the scheme, but with fewer animals, to maintain my herd.”

Mention should be made that Gratiano and his wife, who is also a teacher, are animal lovers. They raise chicken, turkeys, guinea fowls, rabbits and goats at their homestead. Their retirement is secured!

Montana Meats Pvt Ltd is a company that purchases cattle throughout Zimbabwe, both for direct slaughter and for feeding before slaughter. Montana has feedlots, abattoirs and administration facilities countrywide, and logistics solutions are in place to facilitate the project. The company describes its aims as follows:

-  to offer a financial package that will enable the cattle producer to fatten his cattle to their full value without the initial burden of sourcing finance, and

-  to ensure a supply of good quality, healthy, nutritious, and safely monitored beef to the country.