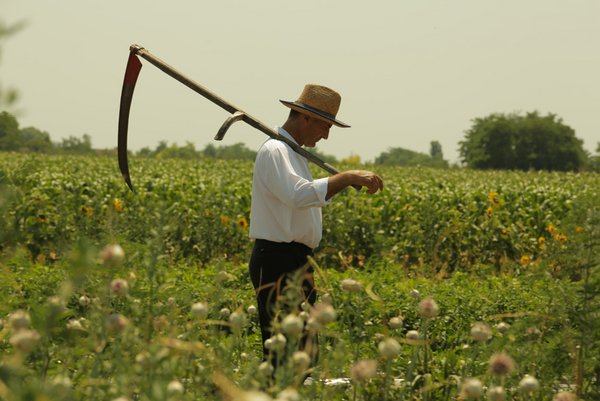 Organic agriculture started in Serbia 20 years ago.
Photo: : A. Milenkovicz

Paving the way for Serbia’s organic agriculture towards the EU

Serbia has a high potential for organic agriculture. To tap this potential, GIZ has been supporting the development of the organic farming sector since 2009. This article outlines the measures that have been implemented so far.

In Serbia, eco-climatic and technical resources provide favourable conditions for the production of organic fruits and vegetables, cereals and oil seeds as well as organic livestock production. The north of the country is dominated by plains with rich, fertile soil and plenty of sunny days throughout the year. This region is suitable for organic crop growing. Several producers of vegetables are very well recognised on the local market. The central parts of Serbia, where the terrain consists of hills, low and medium-height mountains and numerous rivers, provide favourable conditions to grow berries and fruits. Many organic producers are organised in group production and produce berries and other fruits intended for export. The south, with its tall mountains and pastures, offers excellent conditions for livestock production. In this region, there are significant resources of old, autochthonous varieties of animal species, but further steps are needed towards their integration into organic production.

Organic agriculture started in Serbia 20 years ago, and since then, the sector has been strengthened by the involvement of an increasing number of producers, institutions and donors. Following the change of government and establishment of a democratic framework in 2000, foreign investments started coming in with cooperation partners, projects and international donors bringing along knowledge as well as export opportunities.

Deutsche Gesellschaft für Internationale Zusammenarbeit (GIZ), with its Private Sector Development Program ACCESS, has recognised the development potential of the organic sector in Serbia. Through its activities, which were designed in cooperation with Serbian partners, GIZ has been assisting the country in reducing constraints and bottlenecks hampering the development of the agricultural sector in general and of the organic sub-sector in particular and in preparing the necessary framework to turn opportunities into real business.

A survey conducted by GIZ in 2011 shows that arable land under organic farming in Serbia accounts for about 8,500-9,000 ha. More than 800,000 ha of land is organically certified or in the process of certification, including areas used for harvesting wild berries, mushrooms and herbs. Out of total arable land under organic cultivation, perennial crops are planted on almost 40 per cent and annual crops on 16 per cent. The balance (44 %) accounts for grassland and pasture. Within the category of perennials, apples dominate, followed by plums and, finally, various berries, notably raspberries. Cereals, soybeans and vegetables are the main annual crops grown. The majority of these products are destined for export.

Despite the fact that this document was never officially adopted, it was widely used by the MoA and the private sector to address the needs of organic farming in a more systematic approach. Thereby, donor coordination meetings were organised periodically, the main goal being to settle clear responsibilities, activities and timelines for implementation of identified priority and long-term measures.

Significant improvements have been made in several of the agreed objectives. This especially applies to putting framework conditions in place, such as alignment of organic agriculture legislation to EU requirements; strengthening the official control system (institution building of key institutions in the sector, e.g. MoA, Accreditation Body of Serbia and recognised control bodies); application for inclusion in the EU list of equivalent third countries; strengthening the National Association for Organic Production, “Serbia Organica”, in terms of its legal position and the development of services for its members; improving the knowledge and skills of extension agents; introduction of the first bachelor programme in organic agriculture at the University of Novi Sad.


Towards alignment with EU regulations

A milestone was reached in 2010, when the new law on organic production was adopted by parliament. It came into force in January 2011. The “Rulebook on Control and Certification in Organic Production” and “Methods of Organic Production” was published in July 2011. These documents were prepared in accordance with relevant EU regulations on organic farming. A responsible authority was also established and started providing tasks within its field of responsibilities with the support of GIZ Integrated Expert for Organic Agriculture.  It was a huge step towards alignment of the Serbian organic agriculture system with the EU requirements.

In parallel, Serbia submitted the application for inclusion in the EU List of Recognized Third Countries, which reflects the improvements made by Serbian authorities towards system harmonisation with EU standards. Such an inclusion would offer Serbia the opportunity to export organic products to the EU market without import authorisations. This would result in an enhanced use of export potentials considering that the majority of organic products from Serbia are exported to the EU market. The inclusion in the EU List is still pending.

In accordance with the objectives and activities agreed in the NAP, business membership organisations have been supported in order to achieve their lobbying function in a demand-driven approach and develop demand-driven services for their members. Three producers’ associations are seen as important pressure groups – National Association “Serbia Organica”, “Green Network of Vojvodina” and “Terras”. The associations mentioned are active in the field of completing organic agriculture legislation, integrating organic agriculture in all relevant national agricultural and rural development policies, negotiating subsidies, improving the availability of inputs and promoting producer associations.
In this regard, the NAP is seen as an excellent tool for public-private dialogue that reflects sector needs in the most comprehensive way. Therefore, the NAP has been strongly supported by the Ministry of Agriculture (MoA) and GIZ, which initiated its revision in November 2011. Approximately 40 key stakeholders (representatives of two Ministries, universities, institutes, business membership organisations, the private sector, extension services, etc.) participated in the revision of the goals and the implementation of measures drawn up in 2009. For this purpose, five working groups on the main intervention areas in the NAP were established and registered within the MoA: Policy, Legal framework and Institution Building; Control System; Extension and Non-Formal Education; Research and Education; Domestic and Export Market and Public Awareness.

The finalisation of the document was carried out by the MoA, based on the working group results, and should face a public discussion within the next few months and result in adoption by the government.

Regarding the fact that the detailed action plan with clear responsibilities, timelines and sufficient budgets is a prerequisite for an effective promotion of the sector, it was agreed that the NAP working groups should work out a detailed plan for each objective.

Additionally, the MoA requested support from the GIZ–ACCESS Programme regarding the establishment of an appropriate monitoring and evaluation system focusing on the implementation processes, where the MoA will have clear responsibilities and will encourage systematic reviews of the NAP.

Due to the importance of the NAP and the topicality of the issue, a Round Table on “Specific Role of Civil Society in Lobbying and Implementing the National Action Plan for Organic Agriculture Development in the region of South East Europe” (SEE) was organised in May 2012, during the International Agricultural Fair in Novi Sad. This event was initiated by the Green Network of Vojvodina and supported by GIZ. The participants were members of the Balkan Organic Network (BON), an organisation which is committed to facilitating the creation of a regional network in the SEE region and representatives from Croatia, Bosnia and Herzegovina, Macedonia, Kosovo, Montenegro, Romania, Bulgaria and Serbia.
The main conclusions, which support the joint efforts in equalising the development of organic agriculture in the Balkan region, were formulated as follows:

Considering the above mentioned, it can be concluded for Serbia that although satisfying results have been already achieved, regarding the creation of framework conditions for development of organic agriculture, further efforts need to be made towards a full exploitation of the sector potentials.
The sector is still only marginally organised despite the existence of organic associations at national, local and regional level. The level of productivity is low compared to EU countries, mainly due to a lack of inputs, modern technologies, processing and marketing strategies. The integrity of the organic farming system is a problem, resulting in insufficient protection against fraud. The quality of research and education is low, and these areas disconnected from application in practice.

It can be stated that public-private dialogue has to be improved and is vital to achieve progress in all important areas. It should be dedicated to market development, innovative partnerships, green investments, mid-term reviews of the NAP and related impact monitoring. Dialogues involving all relevant actors – authorities, business, academia, NGOs – will contribute to increased public awareness and enlarged supportive networks, improving the position of organic agriculture at country level.