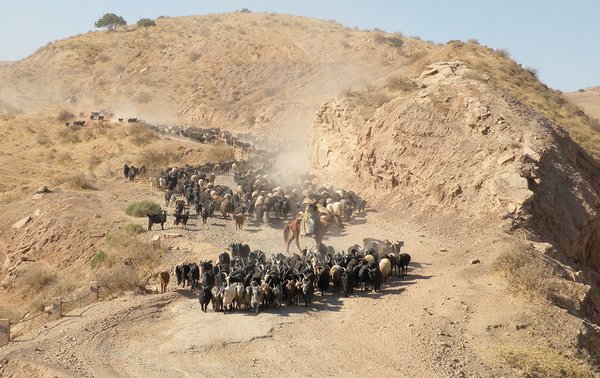 The former Soviet Central Asian republics have undergone de-intensification of their livestock sectors, resulting in an increased reliance on natural pastures. Property rights systems are key to the sustainable management of this resource. However, as the authors demonstrate, it is not easy to implement the respective reform processes.

Central Asia receives little attention from the development community although, at 3.9 million km2, its area is close to that of the European Union. The region’s forests, soils and pasturelands are under pressure from rising rural populations whose dependence on those resources has increased since the collapse of the Soviet Union. Globally important ecosystems are at risk, particularly in the face of climate change. While restoration programmes are expensive, improvements in management systems – although institutionally challenging – are relatively cheap. They may be particularly effective in the case of pastures, where resource use is highly uneven. However, the low priority given to sustainable and inclusive land management by governments represents a major barrier to reform processes.

During the Soviet period, livestock movement between seasonal pastures, often using traditional migratory routes, was an important component of grazing systems. However, importation of subsidised winter feed meant that migrations could be less extensive than before, and allowed livestock numbers to reach historical highs. In the immediate aftermath of independence, feed imports ceased and irrigated land was turned over to crops for human consumption, resulting in a winter feed crisis. State-subsidised pasture improvement programmes such as fertilisation and seeding also came to an end. Livestock thus became highly dependent on natural pastures. Yet as the state system collapsed, transport costs soared and wells fell into disrepair – reducing the means to reach and use remote pastures. In some republics, livestock inventories fell sharply; economies of scale required for movement were lost, exacerbating the abandonment of remote pastures and concentration of livestock around settlements. The proportion of private animals increased – livestock ownership distributions became characterised by a small number of households with commercial flocks or herds, and a larger number owning fewer animals, often for subsistence. The latter households often participate in collective herding systems – pooling animals to cover the costs of shepherding and transport.

At first, property rights governing access to pastures by the new private herders remained in a legal grey area; access was determined by former state farm boundaries, customary memory, and ownership of key infrastructure. As livestock inventories recovered, formal land tenure legislation was increasingly applied to grazing lands. This legislation initially concerned land codes designed for arable land reform which emphasise individual forms of tenure. But as difficulties in the application of these laws to grazing lands became apparent, attention turned to the design of legislation specific to pastures. Debates arose on whether pasture should be allocated to individuals by leasehold or privatisation, or managed as a common property resource. Some policy makers take the view that only long-term individualised access rights can encourage sustainable management and investment, whilst others fear that such rights lead to fragmentation of grazing systems, a reduction in livestock mobility and the loss of access to pastures by poorer households.

In Kyrgyzstan a pasture leasing system was initially introduced. Conflicts over pasture between collective herding groups (unable to take out contracts) and leaseholders, combined with the high transaction costs associated with the leasing system, led to its abolishment in 2009. A new pasture law, elaborated with the support of the World Bank and including experiences based on pilot activities conducted through the GIZ Regional Programme (see Box below) introduced principles of common property resource management. Pastures are now allocated to village governments and managed by Pasture Users Associations (PUA) through annual sale of pasture tickets. Concerns about the new law include the administrative capacity of PUAs; lack of clarity regarding their responsibilities; and problems of inter-sectoral cooperation (for example with the forestry sector). Initial observations suggested that the PUA are not as inclusive as originally intended: official protocols for PUA establishment were sometimes replaced by less transparent procedures dominated by village governments. Information asymmetries initially led to a lack of participation of some herding households. International development agencies and national NGOs currently support capacity building of PUAs, for planning and monitoring of a sustainable pasture management and combating degradation of the resource, with the GIZ Regional Programme playing a coordination role.

A five-year period of pilot projects to combat desertification in 2008 led to the establishment of the GIZ Regional Programme on Sustainable Use of Natural Resources in Central Asia, implemented on behalf of the Federal Ministry for Economic Cooperation and Development (BMZ). In 2013 the European Union launched the regional FLERMONECA project – Forest and Biodiversity Governance including Environmental Monitoring, also implemented in the framework of the Regional Programme. The project facilitates dialogue between Central Asian policy makers in order to promote reform for sustainable management of forest, pasture and wildlife resources.

The Regional Programme adapted the classical policy cycle for development projects to take account of transformation processes characteristic of Central Asian former Soviet countries. Since there are few examples of land management mechanisms involving local users in Central Asia, piloting of possible models is key to the success of reforms. Once such models are elaborated, confidence concerning their transferability must be gained. Only then can reform concepts and a legal framework be developed. In parallel, policy dialogue and donor co-ordination are necessary to attract investments in the reformed framework and to disseminate and mainstream new land use models. The fruits of these reforms are then used to inform pilot activities and reform processes in other Central Asian countries.

On the positive side, the 2009 law is the first in Central Asia to enshrine the principle of common property for pastures; it introduces payment calculated per head of livestock rather than on a hectare basis and preserves the ecological integrity of grazing systems. In the other republics, the situation is quite different (see Box on at the end of the article), and for these, Kyrgyzstan is an important test case to observe. Here, the GIZ programme employs exposure tours, policy dialogue and expert missions to support learning for national reform processes.

The current discussions on pastoral tenure reform in Central Asia reflect questions which have been debated in other parts of the world for many years. Much has been written on the impacts of pasture reform on land degradation in Inner Mongolia and Tibet, sub-division of tribal lands in Africa and on the tensions between public and private range management in the USA. Yet this experience is rarely discussed in Central Asia, where the same issues are sources of conflict at the local level and political argument at the national level. In order to benefit from experiences from outside Central Asia, the EU FLERMONECA project, the International Fund for Agricultural Development (IFAD) and other development partners supported a practitioners’ conference on pasture management reform in Bishkek/Kyrgyzstan in November 2014 to bring worldwide examples of property rights systems which promote environmental sustainability, economic efficiency and equality of access, to a Central Asian audience. To tackle the low political priority given to reform processes, the Regional Programme supports the Economics of Land Degradation (ELD) initiative to support case studies valuing the economic costs of action vs. costs of non-action, i.e. further degradation of pastures. The intention is to provide stronger arguments for sustainable pasture management to relevant political decision-makers.

A major challenge for the future remains to overcome divisions between agencies responsible for forestry and pasture management and move towards a more integrated system of land management. In this regard, a pilot has been launched in the framework of the Energy and Climate Fund Programme “Biodiversity Conservation and Poverty Reduction through Community-based Management of Walnut Forests in Southern Kyrgyzstan”.

Pastoral property rights in the other four republics

The Land Code of Tajikistan allows pastures to be registered to individuals for long-term or permanent heritable use. This led to annexation of certain pastures into private farms, whilst the majority of animals remained in households with no formal access to grazing lands. The 2013 pasture law makes arrangements for allocation of pastures to users associations, but forms of exclusive property right persist, leading to conflicts of interest. The GIZ regional programme supports a coordination platform bringing together state bodies, international development agencies and NGOs for the development of by-laws and implementation regulations for the new pasture law.

In Kazakhstan, pastures may be leased from the state and both the majority of livestock and area under lease are held in registered private farms. Areas around villages are available to all for common use, although these are small and often heavily grazed. Access to pastures outside settlements may be problematic for smaller herds who are unable to bear costs of labour, infrastructure and pasture registration. Up to 2011 the GIZ Regional Programme and UNDP supported pilot projects on seasonal rotational grazing and fodder production on rehabilitated fallow land as well as strategy development for sustainable pasture management, used for a government livestock development programme.

In Uzbekistan, most livestock are owned by private households, whilst the bulk of pastures are held by state farming enterprises with whom these households must negotiate access. Up to 2014, the Regional Programme supported a pilot project on improved pasture management, and it supports economic valuation of pasture ecosystem services.

In Turkmenistan, pastures are held in state-owned farmers associations. State animals are managed by private individuals according to a leasehold arrangement which provides both access to pasture and the opportunity to accumulate private stock. Associations also informally allocate pastures for use by non-leaseholding residents. The GIZ Regional Programme is currently supporting a parliamentary working group to elaborate a pasture law covering access by all types of user, starting with stakeholder consultation in the field.

Alimaev, I. I., Kerven, C., Torekhanov, A., Behnke, R., Smailov, K., Yurchenko, V., Sisatov, Z. & Shanbaev, K. 2008. The impact of livestock grazing on soils and vegetation around settlements in Southeast Kazakhstan. In: Behnke, R. (ed.) The Socio-Economic Causes and Consequences of Desertification in Central Asia. Springer.

Steimann, B. 2011. Making a Living in Uncertainty. Agro-Pastoral Livelihoods and Institutional Transformations in Post-Soviet Rural