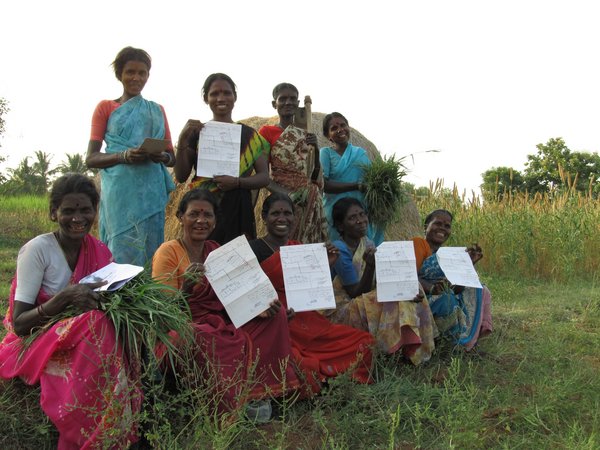 2007 was a year that many as 31 Dalit (Depressed Class) women of Kattupaiyur village will always remember: That’s when their eight-year old land struggle to reclaim a small yet significant piece of heredity became their own. But does owning land make a real difference in their lives?

Sickle in hand under the blazing afternoon sun, the couple hurry to finish harvesting their crop before sundown – this will be their staple food for the next six months. “We seldom leave our homes in search of work these days, thanks to this land,” says a smiling Vijaya as she reaps Kambhu (a millet variety), “but we are heavily dependent on rainfall and this year looks very bleak.”

Her husband Annamalai works silently beside her on their 40-cent (1 acre is 100 cents) reclaimed Panchami (Depressed Class land or Conditional land) land. Like Vijaya and Annamalai, many families live in the interior villages of Tamil Nadu whose diet includes nothing more than what they cultivate on their little plots of land. Kattupaiyur, a tiny village in Villupuram District, Tamil Nadu, is where 31 Dalit women are proud owners of ancestral agricultural land.

“It is Panchami land and it belonged to our forefathers,” grins a cheerful Muthulakshmi Veeran pointing to the highlighted small plot of 25 cents on the site map. All the village women gathered laugh heartily almost forgetting the hardship they went through to get the land titles transferred in their names. Mutulakshmi’s account of yesteryear’s events reminds them of how they were arrested and even held in prison for a day.

“This has been a decade-old struggle, and the reclaimed lands they (the Dalits) now own have helped improve the economic conditions of their homes and community,” says C. Nicholas. -He is Convenor of Dalit Mannurimai Kootamaippu (DMK) – the non-governmental organisation (NGO) instrumental in reclaiming Panchami land rights on behalf of the Dalit community in Tamil Nadu villages.

“600 acres in six districts of Thiruvallur, Kancheepuram, Vellore, Thiruvannamalai and Cuddalore consisting of 1,200 villages have Panchami land,” Nicholas explains, “and the Dalit community owns just 30 per cent of this!” In partnership with ActionAid India, and through the Ambedkar Pearavvai (name of the reclaimed land movement), DMK has encouraged the Government to allot almost 29 acres of depressed class (Panchami) land to the Dalits in the Kattupaiyur, Vadamalaiyinur and Villivannam villages out of 643 acres in Thirukoilur Taluk (sub-district).

Women as a force in society

“I believe that women are the powerhouse in any society, but sadly they are also the ones to bear the brunt in all situations. These Dalit women have been strong consistently; they have been pushing authorities to take notice of their protests and demands,” Nicholas tells us. “Men gave up the land because they migrated in search of employment, but with women this seldom happens. They are more rooted, and it was their commitment to the purpose that encouraged us to make petitions for titles in their names.”

India is a very patriarchal society, and many Indian women, particularly in villages, do not enjoy the freedom of choice. “They are almost always quiet spectators and are rarely encouraged to raise their voices,” G. Jesudoss reveals, explaining the scenario in the Dalit villages, where he works to mobilise the villagers and motivates them to claim their rights.

Jesudoss, who works with IRDS, another NGO active in rural development, says that the intention behind the reclaimed land movement was to bring the lands in the control of those supposed to have them and thereby provide a means for a basic livelihood. “In this context, to find as many as 450 Dalit women holding land titles is a grand achievement!” he smiles. He was referring to the number of titles that were made possible through the Ambedkar Pearavvai movement, which caused the Government authorities to react by allotting land to the Dalit women.

Nicholas says that the lives of women in Kattupaiyur village have changed for the better on account of the land ownerships: “When DMK arrived on the scene, these women were in utter poverty. They were either casual labourers working on other people’s lands or had migrated to bigger districts in Tamil Nadu or nearby states looking for any means of income.  But today, they live in the village, cultivate on their lands and at least go less hungry.”

“However, sometimes, it’s not just about having a land title or the ability to provide food from that land for the family … but also about respect and honour,” S. Savari, Founding Member of IRDS (Integrated Rural Development Society), Villupuram reflects. He relates how the Dalit women were gathered together and land policies explained, and how only after umpteen protests in front of Government offices, hunger strikes and innumerable petitions did the titles come.

“Today, these women hold their pattas (land titles) high up and feel that they have won back something that was rightfully theirs,” he notes. “And they are able to at least cultivate something to eat for a couple of months as opposed to nothing at all!” But most importantly, Savari says, they are “especially proud of the recognition and respect they receive from their spouses, in-laws and their community leaders”.

Holding out her patta for 30 cents of land, Kalliammal explains that she has been in possession of the land for six years now and has harvested Kambhu (millet) and Ulandhu (Black Gram), and occasionally Sesame (Gingerly). “I used to work as a casual labourer in other people’s fields,” she says, looking up from stirring her cooking pot, “and would earn between 50 and 80 Rupees (1 Euro or less) a day depending on the type of work. Sometimes, I graze cattle for a living, but for more than five years, all that has changed.  I have my own land and have harvested enough Ulandhu to last the family for the whole year!”

“Empowerment is not just about access, it is about management as well!” emphasises Nicholas. He makes sure that every single landowner at least uses her plots at least for cultivation. But, not everyone is as lucky as Kalliammal. “I go wherever there is work, and the job contractors sometimes take us to faraway places like Bangalore or Kerala,” Selvamma Gopalsami reveals. She is 50 years old and toils on her 30 cents plot of land year for year. “We are too poor to construct wells and so depend heavily on rain. This year’s rainfall has been scanty, and I was able to harvest just four kilograms of Kambhu,” she adds bleakly. “But it is better to have something to eat rather than have my family starving!”

Most men, and occasionally women, leave the village looking for work. They migrate to other villages and work as casual agricultural labourers or to construction sites in city fringes that prefer day-labourers. “Migration has been a major threat to agricultural development for many years despite the success of the Green Revolution in India,” says Nicholas. “But after 1991, the number of farmers migrating in search of a better livelihood and living began to show an alarming increase, especially in Tamil Nadu, since export-oriented commercial units were on the rise.”

He believes that owning land keeps the people in their villages. “I think that these villagers will stop migrating in search of work because they will have enough to do on their lands, and will slowly yet steadily have enough food to eat for a whole year and maybe even have surplus to market out,” Nicholas maintains, looking ahead.

A July 2010 court judgment of the Madras High Court on the alienation of the Panchami Lands assigned to the Depressed Classes (Dalit Community) to persons who were not from the Depressed Classes raised questions about a problem that has defied solution over decades. The verdict of the Division Bench looked into the problem from the perspective of the constitutional rights of Dalits and awarded that the Panchami lands be re-assigned to Dalits.

Article 46 of the Constitution of India, in terms of its Preamble, enjoins upon the State to provide economic justice to the Scheduled Castes (SC), Scheduled Tribes (ST) and other weaker sections of society, and to prevent their exploitation. Article 39 (b) says that the State is enjoined to distribute its largess, land, to sub-serve the public good. The right to economic justice to the above mentioned society section is the fundamental right to secure equality of status, opportunity and liberty.

“In rural India, land provides economic status to the owner,” Nichols reasons, “and therefore, the State should look at it as a Rights issue and not as a Caste issue.” He explains that land struggles are always sensitive subjects and that in India these efforts receive a lot of attraction.

“Many women have already received ‘reclaimed’ Panchami land pattas, and there is no doubt that holding property has made a change in the lives for the better,” comments Nicholas. “Land holding has also helped reduce migration as a result of sustained livelihoods for these villagers.” The High Court in its judgement said that Panchami land was assigned in favour of the Dalits as a conditional assignment, and that if this was violated, then it could empower the Government to resume those lands. Such resumed lands could be entrusted to some other beneficiary belonging to the Dalit Community. This judgement is likely to encourage similar movements like the Ambedkar Pearavvai to propel the reclaiming of lost lands.

Nicholas indicates that the situation in villages surrounding Ranipet industrial area (Tamil Nadu) is DMK’s next fight. Their office has received more than 800 petitions from women reclaiming Depressed Class land. “These petitions were made two years ago, and we are still negotiating,” he continues hopefully, “We should be allotted land for at least two or three villages sometime this year.”

Failing these interventions, the community, supported by the NGO, will hold a peaceful land occupation protest by literally residing in the lands that are rightfully theirs until Government authorities take notice of their petitions and proceed with required sanctions. And so the struggle continues …