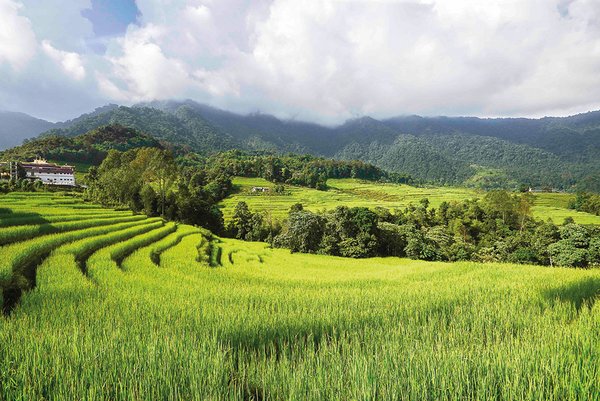 There are roughly 6,000 certified organic farmers in the small northeastern Indian state of Sikkim, with its just over 76,000 hectares of farmland.
Photo: Sikkim Agriculture Department

Organic farming is the name of the game

Many years back the government of Sikkim – a small north-eastern Indian state in the Himalayan mountain region – had conceived the idea of going completely organic. Early this year, the project was put into practice. It remains to be seen whether the scheme is going to pay its way for the farmers.

In 2003, the government of the Indian state of Sikkim passed a resolution in the state assembly and enacted the policy of transforming Sikkim into a complete organic state. There were well-founded reasons for this. The hilly state in eastern Himalaya has a difficult terrain, and with its just over 76,000 hectares of farmland far less cultivable land compared to other agricultural states of India. Also, its agricultural practices hardly resemble those in the country’s other areas, where chemical fertilisers and pesticides form the backbone of farming. Pursuing organic farming as a state policy sparked off a movement and swiftly put the state’s organic agricultural movement on a fast track. Cultivation area under organic farming started adding up until it reached to its full capacity by the end of 2015, following a blanket ban on chemical fertilisers and pesticides.

“It was a matter of patience, but thankfully we ultimately achieved the status of 100 per cent organic farming with the completion of organic certification of all agricultural land in Sikkim,” says Dr. S. Anbalagan, the Executive Director of the Government’s Sikkim Organic Mission. Some clear-cut approaches were needed to be adopted in Sikkim considering the various advantages and disadvantages as well as the prevailing scenario of fertiliser and pesticide consumption all across India. “We had to discourage the use of artificial fertilisers and pesticides and had to substitute chemical inputs by organic manures and fertilisers and biological plant protection measures,” he adds. “And we also had to initiate the establishment of basic infrastructure and statutory requirements to effect the actual organic farming process in the absence of a national policy, standards, accreditation, certification and marketing systems.“

In recent years, a number of studies have suggested that massive use of chemicals has not only degraded Indian farms, water bodies and ground water, but has also caused harm to human health. A study carried out by doctors in the northern state of Jammu & Kashmir has revealed that the use of pesticides showed direct links with growing incidence of brain tumours in parts of the state where pesticides are extensively used in orchards. “Analysis [of the results of the study] revealed that 90.04 per cent (389 out of 432) patients were orchard-farm workers, orchard residents and children playing in the orchards who had been exposed to the high levels of multiple types of neurotoxic and carcinogenic chemicals, sometimes for more than 10–20 years,” the study revealed. Scientists have often been critical about the use of chemical fertilisers and pesticides in India. “Before the Green Revolution, we were importing the bulk of grains, and now we are importing fertilisers and chemicals in enormous quantities,” says Om Rupela, a former scientist with the International Crops Research Institute for the Semi-Arid Tropics, Hyderabad.

On January 18th of this year, India’s Prime Minister, Narendra Modi, himself officially announced Sikkim becoming 100 per cent organic while inaugurating the Sikkim Organic Festival in the state capital, Gangtok. “If the experiment succeeds, farmers in other places will follow it on their own. Farmers may not be influenced by any amount of lectures by scientists … For them, seeing is believing,” Modi said. Later, in a radio-talk, the Prime Minister highlighted the idea and contribution of two young alumni of the Indian Institute of Management Ahmedabad (IIMA), Anurag Agarwal and Siddhi Karnani, whose business venture ‘Parvata Foods’ has started making a big difference to the lives of Sikkim’s organic farmers. “Ours is the first company which is building integrated value chains for the organic produce of Sikkim farmers. We are also packaging and branding their produce, thereby eliminating non-value added middlemen at multiple stages, which is helping to elevate their living standards,” says Siddhi Karnani. Parvata’s primary products are ginger, turmeric, buckwheat, chilli, pineapple and mandarin. The two young entrepreneurs teach the farmers modern agricultural practices to increase productivity and profitability. “We tell them very simple things such as not to grow ginger on the same track each year but use the beds alternately. We also recommend using raised beds instead of flat beds for cultivating ginger,” Siddhi Karnani states. The prices the farmers get for organic produce are at least 20 per cent higher than those of non-organic products.

According to S. Anbalagan, everything is in place for taking organic farming in Sikkim to new heights. “Now all the necessary groundwork has been done. People, especially the youth of the country, only need to exploit this situation to create employment opportunities for themselves and capital for the state,” Anbalagan says. Renzino Lepcha, Chief Operating Officer of Mevedir, an agriculture company which provides services to Sikkim farmers through the Sikkim Organic Mission, fully agrees: “Thanks to the recent budgetary announcement in the union budget and the declaration of Sikkim as a complete organic state, more opportunities will come up in the employment sector as infrastructure will now be taken care of with the advent of more resources.” According to Lepcha, younger people had mostly shifted to urban areas. However, with organic farming opportunities, some are returning to farming with big hopes. But more lucrative ways have to be found to attract the youth. “Onsite value addition to crops and products and more work towards developing high value low volume products like large cardamom will give better opportunities in Sikkim,” he said and added that tourism was a big money spinner in Sikkim, but that value addition with organic farming would make it an even better alternative.

The Sikkim government has already identified a few crops like ginger, large cardamom, buckwheat and turmeric as unique products of Sikkim which have a huge demand. “We don’t have that much land area. So, we have to produce unique things which are of high value. That is why we are targeting these crops,” S. Anbalagan says. He sees a good possibility of the entire north-east Indian region becoming a hub of organic farming. “All the states in the north-east have a similar topography and all of them have mostly been doing traditional farming, which means that for them, the transition to organic would be quite easy,” he says and adds that they are getting visitors from the neighbouring north-eastern states to learn about organic farming practices.

Transport and marketing are crucial factors

The state of Sikkim supports its farmers in several areas, ranging from financing inputs such as seeds and organic fertilisers to the setting up of input production facilities such as vermi-compost pits and rural compost pits. The government has also been bearing the cost of organic certification of all the farmers in the state. One of the major challenges for the roughly 6,000 certified organic farmers as of now is transporting the produce to the markets. “It is very difficult to deal in fresh produce especially as we are landlocked and have no rail or airport connectivity. The risk factor is quite high as there are no proper facilities, no cold chain, no refrigerated vans, no processing unit – no food park, no packaging material – everything comes from outside the state,” says Renzino Lepcha. Further challenges include pests and diseases of certain cash crops like ginger and cardamom, but also issues regarding timely supply of organic pesticides and bio-fertilisers and irrigation problems in some areas.

Presently, the majority of the organic vegetables and fruits find their market within Sikkim. “Although there are markets for organic products outside the state, such as in Delhi or Mumbai, we are not able to cater to them because our products do not become competitive as a lot of cost is involved in transportation to these faraway markets,” Government representative S. Anbalagan explains. “There is a huge export market potential. However, there is no marketable surplus produced in the state.” To remedy this, the Department has come up with the above-mentioned strategy to produce a limited number of crops with a sufficient volume and of high value.

In spite of the numerous obstacles, S. Anbalagan remains optimistic and explains that efforts are being made to address most of the issues – building processing plants for value addition, creating cold-storage facilities everywhere in the state and getting the region connected to the rest of India for speedy transportation of produce to markets. However, this will take some years as a lot of research needs to be carried out, he concedes: “As I said, we need to fix many issues on the technical side. But in other respects, we are making a good progress.”