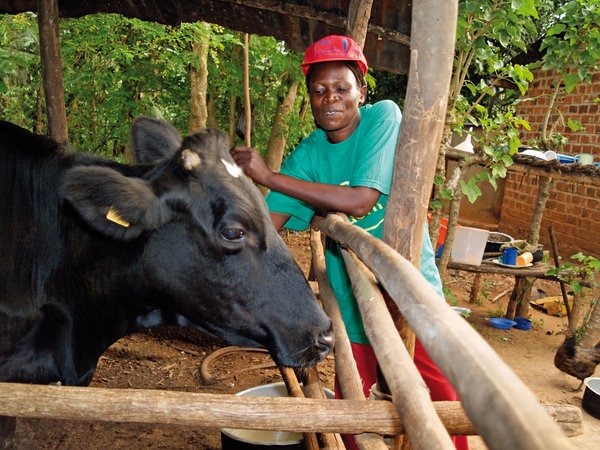 Joyce Kiziito received a cow as a calf from Caritas and she must likewise give the first heifer calf to another family. Thus more and more rural families will be able to produce their own milk.

How small-scale farmers in Uganda are joining forces and stimulating rural development – an example from the diocese of Luweero.

Kamu Kamu (One by One) is the name of the group of small-scale farmers to which Henry Kiwanuka and his daughter Joyce Kiziito belong. Father and daughter, along with 38 other farmers from three villages in Kasaala Parish, meet every week to give each other advice, to save and lend money together, and to help each other in emergencies. Caritas Kasanaensis in the diocese of Luweero (60 kilometres north of the Ugandan capital Kampala) organised this group and more than 500 others like it. Rather than waiting for material aid from outside, the members take action themselves to improve their lot in life – and they receive technical assistance in agricultural and financial matters from Caritas for doing so.

A cow makes the rounds

Henry Kiwanuka’s family does not go hungry, even though the conditions are rather basic. The corn is ripe and ready for harvest: the mature ears on the 1.5 hectares of dry plants need to be shucked and shelled by hand. On another field, the 64 year old farmer pulled the peanuts from the soil a few days ago and has laid them out in the sun to dry. The farmer also grows coffee, bananas, cassava, squash and eggplant. The surplus not needed for subsistence is sold.

Kiwanuka is building a new stall for his two sows and their piglets. 25 chickens scratch around the barnyard. 20 cattle roam on distant grassland and are being fattened for market, and a few goats provide meat for the family. Every morning the farmer herds his future milk cow out to graze on the plantation. He obtained her as a heifer at no cost from Caritas, and he will give her calf to another family. With time more and more rural families will thus be able to produce their own milk.

Henry Kiwanuka farms a total of ca. 15 hectares, which he inherited from his father. Division of property is practiced in Uganda, which means that even if the land remains in the ownership of the entire family, in practice it is continuously subdivided (de facto splitting). Kiwanuka has thus already given 1.5 hectares to his son Andrew, a teacher at the local elementary school who farms ”his“ land as a second occupation on weekends. He still plans to do so even when he (like so many other young people) moves to the city after further education. Hence in spite of rural-urban migration, the land is not left for the farmers who stay behind to manage.

Just four years ago Henry and his family were living in a small round mud hut with a thatch roof. He has since built a sturdy house with a sheet metal roof, living room, and two bedrooms for himself, his wife Magdalena and seven grandchildren (their twelve surviving children are now grown). The house is even equipped with a laundry room. A generator runs for four hours every evening to supply current for charging a cell phone and to operate their latest acquisition, a television. 80 percent of the Ugandan population still lives in scattered rural villages. Electricity is available only in exceptional cases, along the major power lines. Nevertheless the entire country is equipped with a functional mobile telephone network. And thanks to cheap cell phones and rates, even the rural population has access to information.

Because Henry’s television is the only one for miles around, the neighbours gather at his place. Outsiders pay a small contribution to watch television. Henry bought the set with a microloan provided by the Kamu Kamu self-help group. His daughter Joyce bought a solar panel, with which she charges her neighbours’ mobile phones in the midst of the bush and far from the nearest store for a small fee. The families of both farmers thus profit from two alternative sources of income.

With support from Luweero Diocese and the organisation Caritas Kasanaensis, the small-scale farmers joined forces in 2001. They learned how to organise themselves in a group, and they elected a chairman (Henry Kiwanuka) and an executive committee with a secretary and recorder, bookkeeper and accountant, and persons responsible for mutual information. Each group has around 30 to 40 members, and eleven such groups form a regional association. They are each composed of equal numbers of men and women with a good mix of generations, and Christians and Muslims work together. When the positions in the executive committee are filled every two years, care is taken to ensure a good distribution and that all villages are represented.

Each week the farmers meet for about three hours at one of their member’s places under shady trees, where they discuss technical problems in agriculture and give each other advice. Some of the farmers have planted demonstration fields of bananas, sweetpotatoes, or coffee for showing their colleagues how production can be improved or how to deal with problems. They are assisted by Denis Kabiito, a young, well-educated consultant from Caritas Kasanaensis who not only knows a great deal about agriculture and the production of organic herbicides and fungicides, but also has an excellent understanding of markets and prices.

Managing savings and microloans themselves

The weekly deposits and payments are a key aspect of the meetings: each member comes with 1000 to 5.000 Uganda shillings (UGX; 1 EUR ≈ 3.700 UGX) each week. The amount is entered in a bank book. All amounts and bank books go into a large box with multiple locks. The three keys and the box are kept in separate locations. Strict rules and monitoring along with transparent decisions give a sense of security and build trust.

The deposited assets yield no interest. However, they do serve as the basis for microloans of three times the amount deposited. A member may apply for such a microloan, which must be paid back with 10 percent interest within three months. The borrowed money can be used for agricultural improvements, for school tuition, or for household purchases. The interest rate is considerably lower than that charged by banks (which is around 20 %). Even more decisive, however, is the fact that the banks are far away in the cities and that some farmers only tend the land but are not considered as owners and therefore have no collateral for a bank loan. Often in the past their only way out was to accept credit from the dealers. As with the founding of the cooperative credit banks and Raiffeisen banks in Germany, Ugandan farmers too now have access to self-help and mutual support.
At the end of a given year each member receives his or her assets back, the interest earned is paid out proportionately, and the cycle starts over. Kamu Kamu, for example, managed to save 3.58 million UGX (just under 1000 Euros) this way in the first half of 2011, more than three quarters of which was used for loans. But the group sees itself as more than a community savings bank, for it has also set up a social fund to which a little bit is added each week. A small allowance is granted from this fund in emergencies. It is not a lot, but it does help when times are tight and enables people to buy essentials like cornmeal or milk.

The farmers generally sell what isn’t needed for subsistence to dealers. A portion of the products is sold in a store run by a member of the group, with the aim of improving collective marketing and marketing in general over the medium term. The certification of marketable products such as coffee, corn and pineapples as organic and fair trade products is another objective.

With the formation of these groups, Caritas Kasanaensis Luweero has opened a future-oriented chapter in rural development. There are 537 such groups with 35 to 45 members each in the Caritas Kasanaensis zone. They are about participation and codetermination, professional development, networking the villages with one another, equality and appreciation of the roles of men and women, involvement of youth and elderly alike. Other topics of interest include environmental protection, health care and water quality. According to Father Hilary Muheezangango, the director of Caritas Kasanaensis, since the end of the war in 1986 the government has functioned sporadically at best and has done far too little to support or organise such groups. He advocates stronger networking and constructive interaction among governmental, church and private structures.
Hence the church, which is especially well-established in the rural regions of Uganda, is interested in working with the agricultural consultants of government agencies and is also interacting with private organisations such as the Hanns Neumann Foundation in Germany. The latter works with leading coffee roasters, funds sustainable projects in the coffee growing sector, and assists the small-scale farmers with production technology and marketing: the Uganda Natural Coffee Farmers Alliance, an association of small-scale farmers who are improving productivity in coffee growing, cooperating with each other, and generating more added value by processing the coffee and cutting out the numerous dealers (middlemen), is headquartered in the city of Mityana. The middlemen still dominate the business almost everywhere else and determine the prices as they see fit, a daily fact of life for Henry Kiwanuka as well. Farmers frequently have to sell their crops prematurely at a poor price, as they need the money for tuition for their children. Cooperation helps farmers remedy this situation by ensuring market transparency and helping them get through hard times.

The now 25-year old regime of President Yoweri Museveni has indeed provided stability and peace in the country, but “the government needs to plan for its own people, as in practice a lot of things don’t work,” says Father Hilary. There are still no rural roads, the quality of the public schools leaves something to be desired, and there are not enough affordable medications available in the public health care system. The high inflation rate (nearly 13 % in 2010) and the corruption are hard on the people in terms of such things as everyday expenditures or the granting of land titles. “Land grabbing” is a problem that must be taken seriously. Land titles are frequently granted in an underhand manner, without the knowledge of the owners and the farmers tending the land. The farmers tending the land need to be better informed about the laws in effect and supported in land acquisition – and without having to pay (bribe) money.

Father Hilary Muheezangango views the union of the local people as the best chance for strengthening and consolidating the market power of small-scale farmers and for speaking with one voice politically. Also there is no getting around the need for commercialisation and professionalisation of the farmers. They should become more specialised, limit themselves to a few key products, and focus on improving the latter and making them marketable. A small home garden could ensure subsistence, advises Father Muheezangango.

The groups of Kasaala Parish prove that such a union bears fruit – with solidarity and exchange of experience, with education and technical support, with transfer of responsibility and democratic structures. And with time.