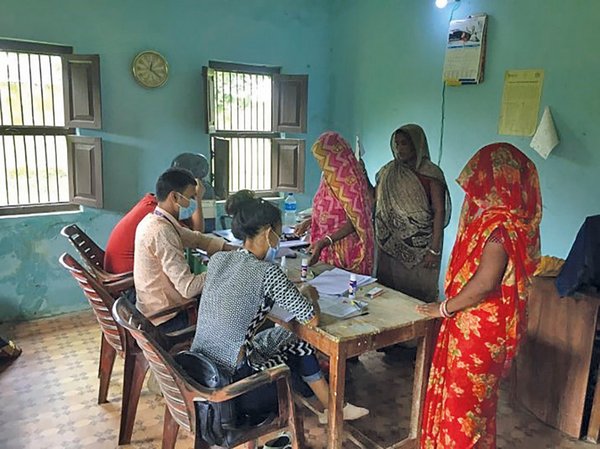 When the Covid-19 pandemic threatened the livelihoods of billions of people world-wide, Nepal was no exception. Cash-based assistance proved to be affective in helping one of the most socially excluded communities meeting their most immediate needs and helping women taking their first step toward financial inclusion.

In many low and middle-income countries of the world, the impacts of economic fallout adopted as containment measures for prevention of Covid-19 transmission were much more severe than the disease itself. This has also been evident in the case of Chamar, Dom, and Musahar communities in Kshireshwornath Municipality of Nepal; even when the infections soared up in April 2021, driving the second wave of the pandemic in the country, none of the members of the 1,265 households from these communities reported a positive case. The reasons for zero infection among this community are debatable. Focus Group Discussions and interviews with the community members revealed that fear of being isolated in quarantine and of not being able to be present for the family if labelled as positive were some reasons why they avoided getting tested. But the pandemic had undeniably worsened their already dire socio-economic situation.

As Terai Dalits, Chamar, Dom and Musahar communities belong to the lowest rung of the centuries-old but widely prevalent hierarchical caste system. Although caste-based discrimination has long been prohibited by the Nepalese legal system, these communities have faced the brunt of historical exclusion and marginalisation as it has continued to hamper their socio-economic well-being and has perpetuated poverty. They are confronted with multidimensional aspects of poverty; a majority of them are land-poor or landless, sustain their family with a daily income of one to two US dollars, have a literacy rate below 30 per cent, and are deprived access to basic facilities such as water and sanitation. In the course of the Covid-induced lockdown from April to September 2021 during the second wave, more than eight out of ten households who relied on daily wage labour for their day-to-day survival lost their sole source of income, and over 80 per cent of them became unable to afford even minimum food consumption. Without any access to formal safety nets, more than 80 per cent of the community members had begun resorting to negative coping mechanisms such as borrowing money from informal money lenders at an alarmingly high interest rate. Thus, Chamar, Dom and Musahar communities are among the groups most adversely affected by the socio-economic consequences of Covid-19.

In Nepal, after the promulgation of the Constitution in 2015, the Disaster Risk Reduction and Management Act was enacted in 2017 which states that disaster management (including non-natural disasters such as pandemics like Covid-19) is the responsibility of local governments and also a concurrent area for local, provincial and federal governments. In accordance with the act, many local governments had already formed Covid-19 management committees at local level during the first wave of the pandemic in 2020 and made use of their resources for managing quarantine centres, screening the returnee migrants, spreading awareness on precautionary measures for Covid-19, distributing relief packages to the most needy and managing vaccination campaigns. However, relief packages provided by most governments was largely an in-kind relief package which mainly included food items and soap. After the onset of the second wave of the pandemic in Nepal in mid-April 2021, it became clear that such relief measures were not enough for the entire lockdown period of more than two months, starting in May 2021.

All tiers of government now requested support from the non-governmental organisations to better respond to the crisis. To complement the local government’s efforts, Helvetas, with the support of Swiss Solidarity, facilitated a multipurpose cash-based assistance of 169 US dollars (20,000 Nepalese rupees) to 1,221 households in Kshireshwornath Municipality from June 2021 to December 2021. The programme was meant to enable the communities to uphold their dignity by reducing their hunger woes and help them meet their most basic needs in the time of crisis. The reason for the selection of unrestricted multipurpose transfer modality was to empower the beneficiaries, as this people-centred approach provides the communities with flexibility and enables people to make choices based on their needs during this humanitarian crisis.The amount for assistance was determined based on the minimum wage set by the government (from 2018 to July 2021, the government had set the minimum monthly wage amount at NPR 13,450 – approx. 114 USD), and the amount was calculated to help the community members meet their immediate needs for a lockdown period of six weeks. While Swiss Solidarity provided 80 per cent of the budgetary support for the project, Helvetas contributed to the remaining budget and led the overall project implementation, which involved but was not limited to providing backstopping to the local level partners, coordinating with the local government, designing and monitoring the project.

Devrain Devi Mahara’s family was one out of the 1,221 households receiving cash support. Right before the pandemic struck, her family had taken a loan to send Devrain’s husband to Qatar for foreign employment. As companies in Qatar started shutting down, he lost his job and due to the high airfare charge, even though he was jobless, he was stuck there for eight months. The Mahara family were one of the 15 per cent of households in their community who had a family member abroad in the course of foreign employment. After taking several loans from her relatives, friends and local money lenders, Devrain finally succeeded in purchasing her husband’s return ticket and getting him back, but with ballooning debt, the couple were further impoverished and unable to sustain their family of five. Just as they were bracing themselves to take another loan from the moneylender, they heard information about the cash assistance programme for members of their community from their ward member. “Receiving cash at such a critical time was like receiving a blessing from God,” says Devrain.

A step towards financial inclusion

Studies have shown that financial inclusion has the potential to bridge the gap between cash transfers and a community’s long-term resilience. Correspondingly, the rationality for the chosen modality of bank transfer through beneficiaries’ bank accounts was to promote financial inclusion of this community as a large majority of the population (88 %) were unbanked and lacked access to any formal financial channels. In order to bring about a positive effect on their financial decision-making within the household, women from the selected households were considered as the primary recipients of cash. The project partnered with an A-class commercial bank who provided these women from the most underprivileged sections with the assistance required to open an individual bank account. As a result, the project facilitated the linkage of 1,180 women from the community with a financial institution through the opening of their bank accounts, and nine out of ten households reported making joint decisions regarding the expenditure of the cash.

While the opening of bank accounts has initiated one of the most disadvantaged communities gaining access to financial services, it must also be acknowledged that financial inclusion needs to go beyond account opening and is not the only inidicator for financial inclusion. Financial literacy was not in the scope of this response project, but new and existing programmes in the area should make considerable efforts to include a component on the missed opportunity and to help contribute to the development of financial stability of these households.

Often, in cash and voucher assistance-related programmes targeting specific groups can ignite tensions and disputes within the community. Hence the municipality was supported in conducting a baseline survey, and community leaders and municipal officials were engaged and consulted in finalisation of the targeting criteria and beneficiary selection. Helvetas partnered with a local NGO who mobilised enumerators to conduct the baseline survey that provided crucial information about the status of the beneficiaries and to identify the beneficiaries. It was found that a majority of households belonging to Dom, Chamar, and Musahar communities had lost their source of income and had no means to support their livelihood during the lockdown.

The assistance programme was implemented in a responsive and transparent manner via the ward and municipality officials. A decentralised decision-making process was adopted at municipality level which further helped gain the trust of the community members. Those who felt that they were being treated unfairly were able to address a grievance-handling committee comprising the mayor, municipality officials and ward-level government officials.

Aligning any humanitarian response project to complement or fill the gaps in coverage of social assistance provided by governmental social protection programmes is of utmost importance and also reflects the important core humanitarian principle of complementarity. Furthermore, the cash-based assistance has proven to be an appropriate means of supporting livelihoods and accessing essential services. It has helped to further affirm that people in crisis have a preferred inclination towards cash to meet their most immediate needs. A Post Distribution Monitoring Study that was also conducted to measure the impact of the assistance revealed that almost all (98 %) of the beneficiaries believed that the cash transfer helped them meet their most pressing needs, with 98 per cent using it to purchase food, 24 per cent to pay back the loans they had incurred to cope with the lockdown and a considerable proportion to pay their medical bills.

The example of Chamar, Dom, and Musahar communities in Nepal shows how international assistance can successfully cooperate with local governments holding information about the household level. The governments’ ownership of the project was not just beneficial in its effective implementation but also helped the community members receive support directly from their local government and experience the essence of federalism. This reflects upon how the local governments should be further strengthened so that they can provide swift and effective responses at community level in times of crisis.

The authors would also like to acknowledge the contribution of Niraj Acharja and Pragya Adhikari while writing the article.