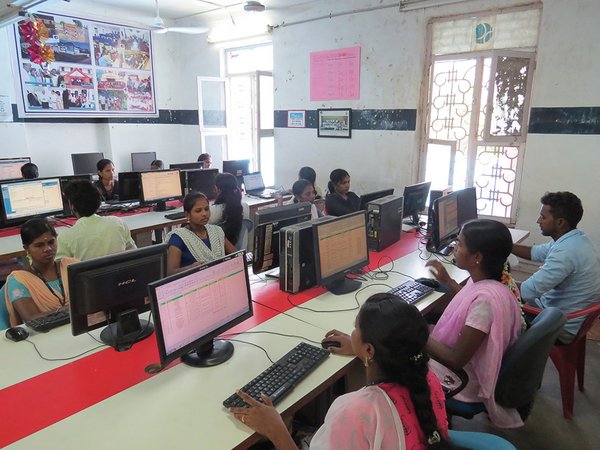 Women form the majority of the workforce in rural BPO firms. A DesiCrew centre in Kollumangudi village.
Photo: Jency Samuel

Back-office business operations carried out by third party service providers in rural areas have emerged as successful social enterprises. In India, curtailing migration, aiding rural development and being cost effective for the businesses, they can offer a big opportunity for social and economic empowerment of educated rural youth. This above all applies to young women, who are particularly affected by unemployment.

Sangeetha Uthirapathi is engrossed in vetting a document on her computer. “We converted our client’s scanned document into an editable file. I’m checking if the two match,” she explains. What is interesting is that the document is in Russian, a language she does not know. In case of a mismatch, she resorts to online tools to translate the word, find a Russian original and check it letter by letter. Her six-member team converts documents in more than 40 languages, an exercise beyond the imagination of village youth elsewhere. Sangeetha is one of the 110 women and 45 men in their early twenties, employed in DesiCrew Solutions at Kollumangudi village, in the Indian state of Tamil Nadu. The poise at work, the lucidity with which they clarify doubts of new team members and the confidence with which they field queries defy the educational and social background of these youth. With a small thatched hut for a home, unlettered parents, shouldering the family’s financial needs and lacking three square meals a day, these youth are oblivious of the world beyond a 25 km radius.

Rural youth get educated in colleges in nearby towns, by commuting every day. Most of them are from agrarian families and first generation learners. With a handful of small commercial establishments, the villages and small towns lack employment opportunities. The young graduates have no option but to find work in a city. Most of them do not succeed and either go back to their village or settle in the city for menial jobs. “As a fresher, I couldn’t find a job in Bangalore. I came back home. Now I’m a store-keeper in a nearby warehouse. No use for my diploma in electronics,” says Rajesh Varadhan of Valarpuram village wryly. While it is relatively easy for men to migrate for work, this is not so for women. Due to familial and societal norms they either stay home or work in small textile shops, provision stores and the like, for which a college degree is not necessary. So in effect, rural graduates’ education is not put to use or is underused. According to the World Migration Report 2015, internal migrants make up 30 per cent of India’s total population. Depending on the job opportunities in a city, the percentage of incoming migrants varies from 15 per cent to 55 per cent. The jobs they get are not of their choice, compelled as they are by economic circumstances. Many young people remain dependent on their parents financially. Besides, migration increases the burden on the limited resources of water and housing. It is from such migration stories that the idea of creating jobs at the village level and applying impact sourcing – also referred to as socially responsive outsorcing, where Internet-based jobs are brought to socioeconomically disadvantaged groups to provide high-value services – stemmed.

In the late 1990s Indian and international companies started outsourcing their data entry, telemarketing, accounting and similar work to third-party service providers – called BPOs (Business Process Outsourcing) in India. Top IT companies also opened BPOs, but in cities. Firms such as DesiCrew, GramIT and RuralShores (in most Indian languages, gram means village; desi in Hindi roughly translates as indigenous) opted for a different strategy. They pioneered the concept of ‘moving jobs to people instead of moving people to jobs’. One of these people is Saloni Malhotra. The young engineer observed educated rural youth migrating to cities to seek employment while visiting villages where rehabilitation works were going on after the Boxing Day tsunami of 2004. Confident that the tasks dealt with in urban BPOs could be handled by educated rural youth, Saloni started DesiCrew in 2007.

At first, this was not quite so easy. For one thing, the community needed to be convinced that the BPO would benefit their youth. Parents in particular had to be assured that the office was safe for girls. And then the customers did not believe that an enterprise in a rural area could have the same qualities as one in a town. “We had to convince clients sceptical about the security of their data, turnaround time and quality of work, or that a rural BPO was as good as one in the city,” recalls Ashwanth Gnanavelu, Business Head at DesiCrew. And Shanmugam Packirisamy, Team Leader at DesiCrew, adds: “We used diesel generators during power cuts. Ten years back, internet connectivity was erratic. So we arranged our schedule accordingly and even worked at night to ensure that output was not affected.”

Jobs at their doorstep

“The idea was to create jobs for educated youth so they won’t migrate but contribute to the local economy and development,” says Priyanka Singh, Senior Manager Social Impact at RuralShores. Employing 3,700 youth in 19 centres across nine states, this firm is fulfilling its vision. The Uttiramerur centre of RuralShores in Tamil Nadu employs 206 youth, hailing from twenty-two villages in a 15 km radius. It handles the customer services management for a telecom giant and the accounting for an international software company. “The basic premise of a BPO is that you give your everyday, time-consuming work to a third party on contract, so that you can focus on your core business. For example, an insurance company will receive policy applications, claim forms and the like as copies printed on paper. These have to be digitised for the company’s records and efficient processing. This work is given to a BPO. With a bit of training, educated youth can handle digitising as well as other jobs, with varying degrees of skills,” says Latha Sriram, a human resource consultant.

While employers in general seek candidates with experience, the majority of the staff in rural BPOs join as freshers. “After training shortlisted applicants, we don’t turn them away even if they don’t measure up. We keep moulding them,” says Saravanan Thangababu, RuralShores Senior Manager. Some join the BPOs with a school completion certificate and simultaneously study for a graduate degree through distance mode. Graduation and work experience offer the youth growth within the company.

When Robin Singh Rajendran was employed as a quality checking assistant with an automobile parts dealer in Chennai, the capital of Tamil Nadu, he had hardly any money to send his parents. Now employed at DesiCrew, he gets to stay with his family, and supplements the income of his father, a farm labourer. Balamurugan Dhananchezhian, a diploma holder in electronics who works with RuralShores, is able to support his widowed mother. While many young girls working with BPOs supplement the family income, Bharathi Viswanathan of DesiCrew is the sole breadwinner of the family. Sangeetha Mohan of RuralShores finds her job ideal as she is able to balance family and work. Without exception, all the youngsters convey that they have gained confidence and communication skills. “We can interact with clients, take decisions, travel to other centres on work and be assertive, thanks to our jobs,” says Sangeetha Uthirapathi.

With less infrastructure and overheads in rural BPOs, clients are offered a minimum 15 per cent reduction in cost compared to urban BPOs. Besides providing provident fund (PF) and insurance benefits, rural BPOs pay well. The youth observe that shops offer a maximum of Rs 4,000 per month (USD 62), but in a BPO they get double that amount. Economic betterment has naturally led to social progress. Some study further through distance mode. The accrued PF has helped with marriage expenses for many girls.

“There are ‘impact sourcing’ firms in Brazil, SriLanka and a few other countries, but being inclusive is also termed impact sourcing,” points out DesiCrew’s Business Head Ashwanth Gnanavelu. In that sense, rural BPOs in India are unique and impact sourcing models to the fullest. The Indian government has also introduced an India BPO Promotion Scheme (IBPS), partnering with private BPOs. The objective is to provide additional employment opportunities in smaller towns. “The private companies are selected via state-wise bidding for setting up BPOs of a minimum of 100-seat capacity. The government gives 50 per cent of the capital investment for establishing the BPO, with a ceiling of Rs 100,000 (USD 1,550) per seat,” says Mahesh. M. Nair, one of the nodal officers of IBPS. The Government also offers further incentives e.g. for employing women and persons with disabilities, partnering with a local entrepreneur, etc. IBPS could enable employment for about 150,000 rural youth.

According to the Strategic Review 2017 of NASSCOM, the national trade body in the IT and BPO sector, the revenue of Indian BPO industry in 2017 would be USD 154 billion. The rural BPO segment being miniscule, its contribution has not been studied. But the positive stories indicate that these firms play a big role in empowering rural youth.

Some facts about rural BPOs in India

- They create jobs for rural youth and stem migration to cities.
- The youth are trained in basic computing and communication skills first and are then prepared for specific tasks.
- While the attrition rate is 35-40 per cent in urban BPOs, it is 6-8 per cent in rural BPOs.
- Girls form the majority of the workforce in rural BPOs. Given the limited opportunities, they are gainfully employed, earning a sustained income.
- Though started with simple data entry jobs, the BPO tasks now include cartography, insurance, software testing, translation, transcription, social media moderation, back-end support for clients’ business development, image editing, etc. Given the critical processes they handle, the Indian National Association of Software & Services Companies has renamed BPO as BPM (Business Process Management).
- Often, the BPOs use the profits for community development.
- With a 55 per cent share, India is the top outsourcing destination globally.