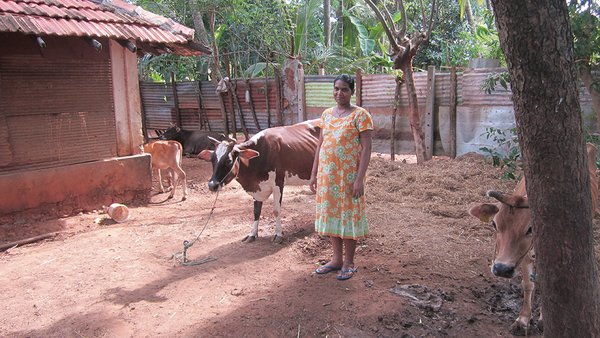 Milk production pays off! – Experiences of a DPPP approach in Northern Sri Lanka

Initiated by an international packaging company and a local retailer enterprise a project was set up in the Jaffna district in 2013 supported by the GIZ “development partnerships with the private sector” (develoPPP) initiative. The project aims at an increased quality and quantity of milk production and medium-term coverage of the regional demand. Within a couple of months, the monthly collected amount of milk has increased from 3,100 litres to 35,610 litres, and the number of participating farmers has increased tenfold.

he Northern Province of Sri Lanka is a post-conflict area with large numbers of repatriates. Many of them were involved in agriculture and animal husbandry before the war, while others are newcomers. The majority of dairy livestock in the Jaffna district are reared in small-scale operations, with 46 per cent of the farming families owning fewer than five cattle and less than five per cent owning more than 16 cattle. Many cattle are Jersey crosses, but the production level is rather low. The government of Sri Lanka seeks a substantial increase in national milk production and at least 50 per cent self-sufficiency by 2015. The dairy industry has considerable potential to contribute to economic development. There is a promising regional market for milk. Since safe cool chains are lacking, up to 80 per cent of the milk produced in the North is transported to the South, and a large amount is converted into milk powder. With easy storage requirements and long shelf life, UHT milk could be an adequate option in future.

Much could be improved on the production side. Animals are kept in a semi-intensive management systems, milked only in the morning, and fed mostly based on paddy straw plus rice residues. Commercial feeds and crop residues available in market are rarely fed, and there is little coverage of artificial insemination (AI) services. The result is low milk yield and short lactation periods. In addition, there is a shortage of quality animals that are able to produce higher yield for those who want to expand. Many farmers, in particular the newcomers, lack knowledge in dairy production. Their access to financial services is limited. Not all farmers sell their milk through the formal channels. Much of it is sold in small quantities on the informal market and to schools under unhygienic conditions.

Initiated by an international packaging company and a local retailer enterprise a project was set up in 2013 supported by the GIZ “development partnerships with the private sector” (develoPPP) initiative. The project aims at an increased quality and quantity of milk production and medium-term coverage of the regional demand. A transfer from small-scale semi-intensive dairy farmer to market-oriented producer is needed to improve income and food security. The project focuses specially on involving women and creating jobs for young people along the dairy value chain. It is jointly carried out by all three partners.
The following three pillars are crucial to its success:

Setting up a dairy hub – an approach that has been successfully introduced by an international packaging company to Bangladesh, Pakistan and India. This is a one-herd concept that encompasses smallholder farmers from 50 to 60 villages located within a 20 to 25 kilometre radius. Dairy hubs shorten the supply chain and make milk collection more efficient. A milk collection centre was established in late 2013 and small collection points have been set up. The milk collection centre is managed and owned by a local dairy processor. Many collection points are managed by local women. All milk is tested upon arrival. Registered farmers can supply their morning and evening milk without any quantity limitation. They receive a fair price based on the delivered quality which is slightly above the set average milk price. A steady supply of milk is needed to establish a credible marketing system. The supply system needs to be constantly monitored. Improved usage of available by-products is promoted, and opportunities to provide the farmers with high quality feeds (ingredients) at a reasonable price are investigated. Supply of commercially available feed is supported, and small-scale trade with feed and fodder is encouraged. The promotion of production and use of improved fodder plants has started, and storage and conservation methods will follow soon. AI services are to improve through the project’s own AI techniques.

Constant training and advisory services are needed to improve the production and help the farmers become an agri-preneur. A team of female and male extension workers have been trained in dairy production and are receiving coaching. They pay regular visits to individual farmers and farmers’ groups. Appropriate training and extension material is under preparation under the consideration of gender-sensitive extension approaches.

The establishment of rural milk producer groups is essential for the sustainability of the project activities. Therefore, the formation of producer groups has been supported to increase farmers’ voice and visibility and strengthen the position of female famers. Extension services are provided to members free of charge or at a reasonable cost. Registered producer groups will have better access to financing instruments and credits and options to set up their own small rural milk collection points.

Already eight months after the opening of the collection centre, the monthly collected amount of milk has increased from 3,100 litres to 35,610 litres, and the number of participating farmers has increased tenfold. Greater awareness of hygiene and milk quality is developing, and milk quality has improved, too. Participating farmers earn around 20 per cent from regular milk supply. They have already started to invest in their dairy business. Higher income is expected after the next calving under an improved management and feeding regime. Dairy farming is becoming the primary business of more and more farmers, and motivation to invest in dairy is growing. Female participation needs further attention, although some women excel at managing collection points.