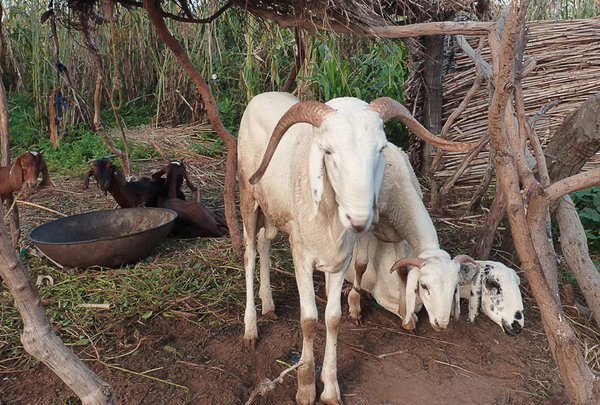 Fattening a few sheep and goats in the backyard in mixed crop-livestock systems in western Niger.
Photo: P. Hiernaux

Livestock: recyclers that promote the sustainability of smallholder farms

Livestock are kept for a wide range of purposes in Africa, and there is considerable diversity in animal husbandry. Among the most important advantages in keeping animals is their contribution to maintaining and even improving soil fertility. Furthermore, animal husbandry offers economic, social and cultural benefits. However, the authors also look at the constraints that smallholders face in livestock husbandry.

Smallholder agriculture in the dry tropics of Africa is highly diversified in terms of farm assets and production systems. The crops include staple such as millet, sorghum, maize and cowpea, also associated with cash crops such as groundnut and cotton. The cropping practices range from hand cultivation to the use of animal traction, with mechanisation remaining exceptional (water pumps, cereal threshing). Family labour predominates and is organised at a range of levels from nuclear to extended family and to community, and is more or less tightly structured by gender and age. Wage labour is infrequent, but it is increasing alongside a diversity of mutual aid, sharing and entrustment institutions. If communal institutions dominate family access to natural resources with rights to crop instead of property titles, the regulations of these rights, their being shared among families and transmission between generations largely differ between regions and states. Yet livestock husbandry adds a whole dimension to this diversity by its impact on the farming system, its productivity and its sustainability. Livestock husbandry itself is extremely diversified depending on the species and breeds reared, the number of animals, the commodity targeted (meat, milk, draft) and also the options selected to feed or graze the animals.

In association with cropping, livestock husbandry is either ‘agro-pastoral’, with relatively large breeding herds fed by grazing, or ‘mixed-farming’ in which a few animals are reared in the farm compound either for fattening, for draft or dairy

Agro-pastoralism. Livestock husbandry is qualified ‘pastoral’ when livestock are fed mostly by grazing commonly managed rangelands, fallows, stubbles or browsing bushes and shrubs, and when the main goal is to produce young animals, among which most of the male are sold young while females are kept in the herd to reproduce and eventually provide some milk. If pastoral husbandry is associated to cropping, the resulting farming system is qualified ‘agro-pastoral’.

Mixed farming. When grazing is not the major source of animal nutrition, livestock being fed harvested fodder and supplement feed at a barn or in a yard, and when reproduction is not the major goal, there are a number of livestock husbandry systems that altogether could be qualified of ‘opportunistic’ as they all are tightly market-oriented. This includes animal fattening (most often, young males bought on the market to be sold back after a few months, or else culled oxen or old females), draft animals, and some dairy cows. If opportunistic husbandry is associated to cropping, the resulting farming system is qualified ‘mixed-farming’.

In agro-pastoral systems, the reproduction goal implies relatively large herds mainly composed of females (75-85 per cent, and 50 per cent adult females). Because of the duration of the reproduction cycle and the reproductive female careers, livestock breeding in agro-pastoral system is organised in the long term. The herd size and the feeding of livestock by grazing entail the use of communal lands outside farmlands and, most often, seasonal moves of herds away from farmlands in regional, sometimes cross-border, transhumance.

In mixed-farming systems, the number of animals can be limited to just a few units, depending on the family investment capacity. And livestock can be reared for short periods, such as a few months for sheep or goat fattening, depending on market prices (animals, fodder), family labour availability and need for cash. Yet, livestock may also be kept longer, for draft (donkey, oxen, camels) or for commercial dairy farming.

Whatever the farming system, livestock recycle a large fraction of the ingested feed as faeces and urine, albeit to a varying degree depending on the nutritive quality of the feed itself, the season and management. With high-quality feed, such as during wet season grazing, about 40 per cent of the feed intake is excreted as faeces, with the rate rising up to 60 per cent with low-quality feed, e.g. during late dry-season grazing. The share of nutrients recycled by livestock is even larger, often accounting for more than 80 per cent of the nutrient intake. There are nuances however, depending on breeds and animal physiological status. Lactating females, for example, are recycling less as they destine nutrients, especially protein, calcium, phosphate and sodium, to their offspring through milk. Most nutrients are recycled via faeces, but about half of the nitrogen is recycled in faeces and half in urine, as urea. Potassium and sodium are abundant in urine, conferring its elevated pH.

Agro-pastoral systems and mixed farming differ by the spatial distribution of the livestock excretions and by their management. Because livestock are grazing locally and away from the community lands during transhumance, about half of the excretions in agro-pastoral systems are deposited along the grazing orbits in rangelands, fallows and stubbles. Only the other half, occurring when livestock are resting by the water points, in yards, camps or corrals is managed by the agro-pastoralist to amend cropland soil fertility. This is done either by harvesting manure in the resting places, transporting and applying it manually in the field or direct deposition in the field by corralled livestock.

In addition to recycling nutrients, grazing livestock also impacts the agro-ecosystem by trampling. In the dry season, trampling mechanically transfers standing straws into litter, and then fragments and buries the litter into topsoil organic material. Both processes concur to speed up organic matter decomposition and, together with excretions, enhance soil biotic activity (termites, microbes, fungi).

In mixed farming systems, feeding livestock fodder crops (cowpea, groundnut haulms), crop residues (cereal stalks and brans) and agro-industrial by-products (cotton seed, groundnut or sesame cakes), is a way to value these products and recycle their organic matter and nutrients on the farm. All excretions are deposited in the barn, pen or yard where livestock are kept, and the resulting manure is harvested, cart-transported and hand-applied to the crop field.

Whatever the production system, the balances of the organic matter and nutrient fluxes due to livestock are a challenge to assess because of livestock mobility and rangeland communal management in agro-pastoralism, and because of multiple fodder inputs in mixed farming. Attempts have been made to assess these balances over a one-year cycle at a range of scales from farm to regions, highlighting contrasted balances between fields, landscape units and farms depending on livestock management. However, these balances do not account for trampling, the enhanced biological activity of the soils or the secondary effects of livestock grazing on soil erosion and burning risk attenuation.

The ways by which livestock recycle organic matter and nutrients in the agro-ecosystem differ between farming systems, but in all cases they result in a concentration of nutrients in fields selected by the farmer to have a higher soil fertility status: the manured fields that often extend next to the villages or camps. The highest fertility of these fields is taken advantage of to raise and secure staple production (short cycle cereals) and to diversify production with more demanding cash crops (groundnut, cotton, sesame).

Herds are corralled during resting time between the evening and morning milking (some of the cattle herds go on night grazing for a few hours in the meantime). Corrals are not fenced, but animals are tied to poles stuck in the sandy soil, 4x4 m apart for cattle and 2x2 m apart for small ruminants. They are located on fallows during the cropping seasons and on croplands during the dry season, and they are moved every two to four weeks, corresponding to the annual manure application of 12 to 24 t dry matter (DM)/ha over 0.04 ha per cattle and 0.01 ha per small ruminant. One advantage of corralling is that urine is also captured. Even if a large fraction of the nitrogen from urine is lost by volatilisation, urine deposition has a specific contribution to soil fertility by bringing potassium and enhancing soil pH.

The economic, social and cultural benefit

Being nutrient recyclers and major agents in soil fertility enhancing is not the only, nor perceived by farmers as the first, role of livestock in smallholder farming systems. The animal production, being dairy products or meat, as animals sold on the market, and the services of draft animals for cart pulling or soil tilling (ploughing, weeding), are viewed as the prime benefits. In addition, herds are assets whose large capital values are determinant for the social and economic status of the farmers. Selling part of that capital provides cash to pay for taxes, school fees, and family daily needs. It also allows investments in farming equipment and off-farm activities such as trade and transport. Unlike crops, which are tied to a highly seasonal calendar in the dry tropics, livestock husbandry is a year-round occupation associating daily tasks (care, milking, herding, feeding and watering) to more seasonal

(transhumance) and occasional ones (curing, selling). These tasks all require specialised expertise that altogether supports cultural values shared within the large social web of the pastoralists, agro-pastoralists, mixed farmers and the other professions of the livestock sector.
To conclude: what constrains livestock development in smallholder farms?

Livestock husbandry offers many options to strengthen farming system sustainability by enhancing soil productivity and providing high-value products and services, and it adds a whole dimension to farm diversification. So one could wonder what impedes or limits the livestock development of smallholder farms. While lacks in the capital needed to start, the labour availability within family, or the husbandry skills can deter some farmers from livestock husbandry, the main constraint that smallholders are facing is year-round access to good quality feed for livestock. In agro-pastoral farms, feed access is achieved by optimising the local and regional mobility of grazing livestock to adapt to the spatial heterogeneity and seasonal changes in rangeland resources. Given the historical expansion of land cropped, institutional restrictions on the moves of livestock and land tenure changes towards privatisation of the land, livestock access to grazing resources and capacity to move have to be secured. In mixed-farming husbandry, there is a need to boost fodder crop production and facilitate farmer access to high quality agro-industrial feeds on the market. Thus, the ways to solve the feed constraint differ between production systems. Yet, this should not hide the functional and commercial interrelations between agro-pastoralism (providing young animals) and mixed-farming (providing dry season grazing, agro-industrial by-products). 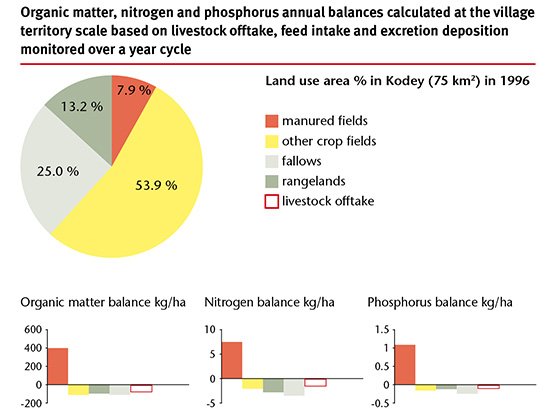 Livestock nutrition and productivity
Ayantunde A. A., S. Fernández-Rivera, P. H. Hiernaux et R. Tabo (2008) "Implications of restricted access to grazing by cattle in wet season in the Sahel." Journal of Arid Environments 72(4): 523-533.