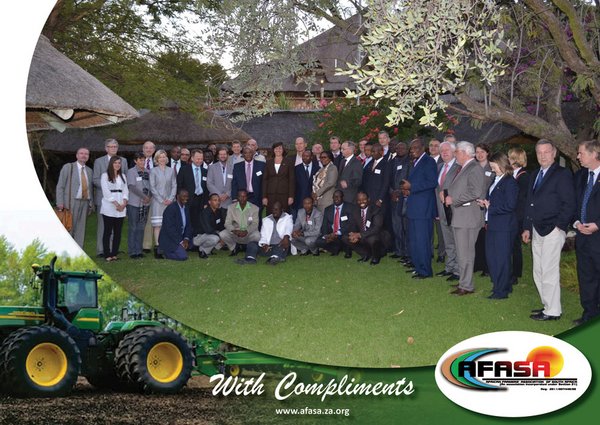 Farmers from Germany and 15 African states at the “Farmers’ Exchange Across Continents” workshop in May 2013.
Photo: AFASA

How to increase farmer organisations’ effectiveness?

Farmer organisations that deal with policy and advocacy need a lot of specific skills. Exchange programmes with their counterparts in the North can help local farmer organisation in the Souht tap their potential.

Thompson et al. (2009) succinctly summarise the support that is needed by farmer organisations that deal with policy and advocacy, namely:

Local farmer organisations can learn much from farmers in the Northern hemisphere, as was illustrated by the “Farmers’ Exchange Across Continents” seminar which was held in 2013 by farmers from Germany with their counterparts from 15 African states. The major areas in which the learning could occur are:

Most African farmers unions are still struggling to run and manage their day-to-day administrative duties due to lack of experience and institutional capacity. They could learn from their counterparts from the North through training of leadership and management of the national farmer organisations in governance (much along similar lines to the IFAD Support to Farmers’ Organizations in Africa Programme).

This is in recognition of the fact that smallholder farmers are probably here to stay on the African continent and hence, like in the North, have a potential to transform their small businesses into combined big businesses with stakes in the whole agricultural value chain in their respective regions and countries.

Farmers in the South would also benefit from capacitation to collate and disseminate technical information to members on a timely basis. A number of such platforms have been developed elsewhere in the world which could be adapted to situations in which they are being localised. In a similar vein, one of the greatest challenges of smallholder farmers in South Africa is technical knowledge and entrepreneurship in agriculture. Approaches to fill in this gap could be adapted from the various vocational training models in the North, such as the Netherlands and Germany. Efforts to achieve this in South Africa include the partnership between the Dutch and the North West Department of Agriculture for the use for Kgora Resource Centre as a farmer development centre, as well as a memorandum of agreement signed between South Africa and Germany during the Farmers’ Exchange Across Continents seminar. The challenges are that some of the agreements take long to implement and the efforts are too few and far between to be effectively scaled up.

Farmer organisations could benefit from secondment of staff whose primary role would include capacitation of the existing leadership and management to run the organisations. Secondment could also be linked to specific development programmes.

Better co-ordination across the sector

Better co-ordination across the sector can be achieved through a united body to deal with matters of common interest.  The state could facilitate co-ordination with a policy for the recognition of legitimate and representative farmer organisations, and strengthen such organisations to play their advocacy role more effectively. Participation in national, regional and international forums assists leaders of farmer organisations to learn best practices from each other and influence policies at even higher levels than the national governments. The major national farmers’ unions of South Africa have affiliated to the relevant regional and international organisations.