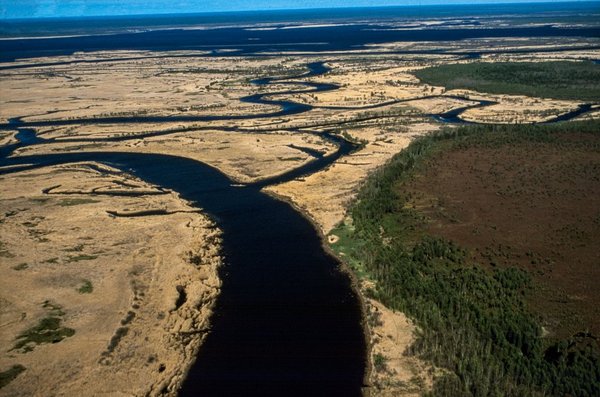 A raised bog in the Archangelsk region of Russia.© Michael Succow

The conservation and restoration of wetlands can help to reduce the concentration of CO2 in the atmosphere. The good news is that managing and restoring these ecosystems is working better and better.

Wetlands store around five times more carbon per square metre than forests and 500 times more than oceans. A new study by an international research team published in May 2022 highlights the urgency to stop ongoing losses and to restore wetlands as the world’s biotic carbon hotspots.

Although moors, salt marshes, mangrove forests and seagrass meadows cover a mere one per cent of the Earth’s surface, they contain 20 per cent of the entire carbon contained world-wide in all ecosystems. This huge amount can be explained by plant growth and carbon capture stimulating each other in the ground.

These landscapes form with the support of the plants growing in them. One example is peat bogs, which are part of raised bog areas. Together, they retain enormous amounts of rainwater, which stimulates their own growth. Under the living peat mosses, what is left of little dead plants accumulates. Since this partly up to ten metres thick layer is permanently soaked with water, hardly any of the dead plant matter is decomposed. The carbon is retained and is not emitted into the atmosphere as carbon dioxide.

In fenlands and coastal marshland, plants retain dead plant matter with their root mats. These then release nutrients, which in turn help the plants grow better. The result is that the carbon-rich plant residue accumulates in the wet soil and forms a thick layer of earth. Like in raised bogs, this also prevents CO2 emissions.

Although wetlands are an indispensable factor in combating climate change, anthropogenic interventions are destroying one per cent of these ecosystems each year. Draining, cultivation and environmental pollution destroy the landscape-forming processes and cause around five per cent of our annual CO2 emissions world-wide.

More than half of all attempts to restore wetlands fail because the landscape-forming characteristics of plants are not, or at least not sufficiently, considered. “Our study shows that in terms of quantity, moors are the most important carbon storage ecosystems in the world next to oceans, although they perform this function in a much smaller area than oceans do. It is therefore crucial to strictly protect moors which are still in a good condition and rewet and store drained, degraded moors as quickly as possible. The good news is that we are getting to know more and more about how to accomplish this in large areas,” says Hans Joosten, who is Professor of Peatland Studies and Palaeoecology at the University of Greifswald/Germany.

Read more at the University of Greifswald website (in German)