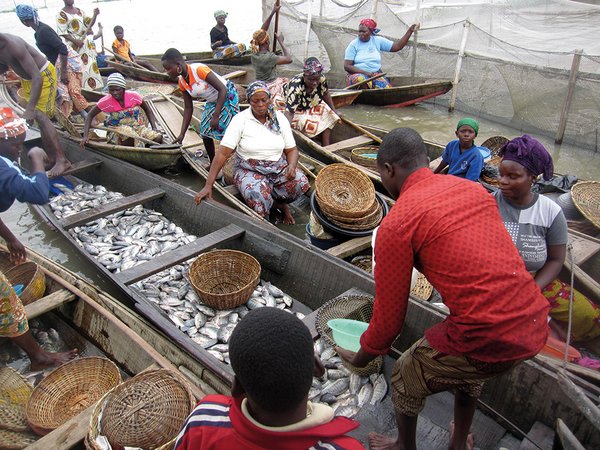 Intra-regional trade can significantly contribute to food security and inclusive and sustainable economic growth in Africa. However, numerous barriers to cross-border trade exist which not only slow down the development of the agricultural sector but also negatively affect consumer prices and profits in value chains. In order to realise the potentials to improve food security, existing networks of informal trade need to be recognised and improved. Moreover, more attention should be paid to the constraints women traders face, our authors maintain.

In Africa, decades of neglect of the agricultural sector as a growth sector and inefficient distribution systems have resulted in food demand exceeding food supply. Low productivity, post-harvest losses, high transport costs and poor infrastructure are major obstacles to achieving the goal of Africa feeding itself. These problems are exacerbated by the population in Africa growing faster than its production of food crops. According to the United Nations, over half of the global population growth between now and 2050 will occur in Africa. The combination of predominantly urban population growth, changing dietary patterns and low productivity of African smallholder farmers is one of the reasons why the continent’s food imports are increasing rapidly. But the present situation is also a result of trade policies and restrictions which limit access to markets. Promoting regional trade could enhance food security for the region as a whole.

Regional economic communities in Africa have adopted far-reaching commitments to foster intra-regional trade. However, implementation of these regional commitments at national levels is lagging behind. Many (non-) tariff barriers to intra-regional trade, such as complex domestic regulations and inefficient border procedures, remain in place. These barriers and poor infrastructure affect the incomes of producers and traders, lead to high levels of post-harvest losses and make intra-regional trade expensive. As a result, Africa has the lowest level of intra-regional trade world-wide: over the past decade, the average level of intra-African trade has fluctuated around 15 per cent of Africa’s total trade. However, there is clear evidence that much of the continent’s intra-regional trade is not recorded in statistics. Therefore, policy-makers cannot fully capture its impact on food security and economic growth. Formal extra-regional trade of Africa has been driven primarily by natural resources and primary commodities. These export flows have had a limited impact on employment and have not led to inclusive economic growth. To feed their burgeoning populations, countries depended heavily on food imports. Africa spent over 35 billion US dollars (USD) on food imports in 2015, and it is projected that its net imports will increase to more than 110 billion USD by 2025. To curb this trend, in 2014, the African Heads of State adopted a resolution in the context of the Malabo Declaration to triple the volume of intra-regional agricultural trade (see also articles "Fostering intra-regional agricultural trade in Africa – What could the role of CAADP be?" and "Let's move towards the Africa we want").

Addressing (non-) tariff barriers and poor infrastructure would mean that countries can reap benefits of their economies’ complementarities, further specialise and take advantage of economies of scale. This would make them less dependent on global agricultural value chains and price changes on global markets. African countries could further develop cross-border value chains by leveraging each other’s comparative advantages, adding value and exporting the finished product outside the region. Different studies have already pointed out how Africa can enhance services and manufacturing. Easier intra-regional trade would allow investors to profit from a larger consumer market with rising middle classes. Finally, more intra-regional trade would lead to increased competition for inefficient domestic firms, leading to a net welfare gain for consumers. To unlock these opportunities, intra-regional trade needs to be facilitated. Landlocked countries have a special interest in measures to enhance intra-regional trade, because they face higher trade costs than coastal countries.

Food security and the importance of informal trade

Agriculture is the main source of income for hundreds of millions of people – predominantly small-scale farmers, entrepreneurs and traders in Africa. Feeding a rapidly growing and urbanised population will require major efforts, not only to grow more food but also to make sure it reaches low-income consumers at affordable prices. In Africa, 60 per cent of trade in agricultural produce is unrecorded. In Nigeria, for example, unrecorded or informal activity is estimated to account for as much as 64 per cent of GDP. Informal trade between Benin and Nigeria is significant. Importers take advantage of Nigeria’s extensive borders and high tariff charges to export unrecorded poultry, rice and other food and agricultural products to Nigeria, of which an estimated 85 per cent is informal.

Informal trade cannot be captured in a single definition. The fact that it is unrecorded in statistics is the lowest common denominator describing a process that involves multiple actors in the value chain who may or may not be operating formally within existing legal frameworks or informally bypassing regulatory frameworks. There are many reasons why small-scale traders in particular do not adhere to formal rules and regulations: lack of information, high compliance costs, and customs officials and other agencies at border posts that condone informal border crossing for personal gain. The challenge is to ensure that traders in the informal sector can access services and benefits, not to impose even more restrictions and costs that undermine food security.

A study on borderland economies where both formal and informal traders operate by the Emerging Futures Lab for TradeMark East Africa notes that informal trade in East Africa is a web of interlinked networks that connects people and products region-wide. It is viewed as resilient and persistent since it is held together by community relationships, kinship and trust. This network is flexible and robust enough to survive the social and economic upheavals and natural disasters of the last decades. A similar conclusion could be drawn with respect to other regions. In West Africa, for example, centuries old livestock trading relations between the Sahelian countries and the coastal countries contribute towards food security in rapidly growing urban centres concentrated on the coast of West Africa. Rapid urbanisation and increased demand for high quality dietary proteins as well as desertification in the Sahel may however render some of the old traditions obsolete. Feeding the burgeoning urban conglomerates requires new, more efficient value chains and efficient crop and livestock trade. This should build on these existing networks and add value to generate higher incomes for producers and traders and lower the cost of food for consumers. Although formalisation of some aspects may be necessary, for example to reduce the risk of diseases spreading, such measures should also take into account the need to increase incomes and food security of low income segments of the population while generating resources for governments to maintain high standards of food safety and service provision for the agricultural sector.

Around 75 per cent of the cross-border trade within Africa is informal trade. The vast majority of small-scale informal agricultural traders are women. Studies do show some important differences between, for example, East Africa, where women seem to be less prominent as traders but do participate actively as producers, and West Africa, where women traders are more active. In both cases however women are key actors in regional value chains. It is only recently that governments, donors and others involved in promoting regional trade have started to respond to the specific gender-related constraints that women traders face.

A study in the Great Lakes region in Central Africa noted that more than 50 per cent of the women interviewed said they were subjected to harassment and abuse during attempts to cross borders. UN Women has been supporting women in informal cross-border trade since 2005. The organisation lists numerous gender-related constraints that women traders face: lack of access to credit facilities and other services, restrictions on the free flow of agricultural food products across borders and a high rate of illiteracy. Moreover, data on women’s informal trading activities is scarce, making it difficult to understand the dynamics at play to inform trade policies. If women continue to face these challenges, they will not be able to fully realise their potential as traders nor contribute effectively towards improving food security.

With support of the government of the Netherlands, TradeMark East Africa launched a Women and Trade programme in 2015. It seeks to increase incomes and improve livelihoods for women traders and women-owned enterprises through capacity building, addressing trade barriers and advocacy for policies that create an enabling environment for women involved in trade. The programme aims towards a 30 per cent increase in the use of formal trade channels and systems by women traders, so that they have more income, more access to information and benefits of services and protection against abuses at border posts. The first ever UN High-Level Panel for Women’s Economic Empowerment in March 2016 focused on increasing opportunities for women who work informally as one of its major issues.

The Communal Approach for Agrifood Markets programme
The Communal Approach for Agrifood Markets programme (Approche Communale pour le Marché Agricole – ACMA) in Benin is an intervention that – with support of the government of the Netherlands – has successfully addressed specific institutional constraints that small-scale farmers/traders face in cross-border trade. It facilitates crossborder trade of agricultural products from Benin for processing industries in Lagos, Ogun and Oyo States in Nigeria through matching Nigerian buyers with small-scale farmers, processors or traders in Benin 48 per cent of whom are women. In 2015, dialogues between mayors in Benin and private sector operators led to the identification of key issues that needed to be addressed: inadequate infrastructure, frequent harassment of traders, the power of cartels of Nigerian transporters and traders and multiple local taxes to be paid by traders. These issues have a negative impact on the competitiveness of agricultural products. An intercommunal public-private sector dialogue for facilitating cross-border trade was set up to facilitate informal regional trade. One focal area is the organisation of corridors for specific local agricultural products, which is mainly a women’s activity.

Regional economic communities in Africa have long recognised the need for regional integration. The low levels of formal recorded agricultural trade do not reflect the realities of how people sell and access basic foodstuffs. They are in fact misleading and risk leading to policies and programmes that undermine food security and the positions of small-scale – mainly women – traders. The results are evident: a poorly developed agricultural sector, food security challenges and a massive food import bill. A concerted effort is needed to define trade regimes which build on existing formal and informal trade networks, including full recognition of the roles of women in agricultural production and trade, and to harness the full scale of options to improve food security, create jobs and foster inclusive and sustainable economic growth.

The Dutch aid, trade and investment agenda aims at reducing extreme poverty within a generation, achieving inclusive and sustainable economic growth and promoting success for Dutch businesses and knowledge institutions in developing countries. The Netherlands supports regional market development in East Africa through TradeMark East Africa, and together with Denmark, other donors and regional institutions, it develops a regional trade facilitation initiative in West Africa.