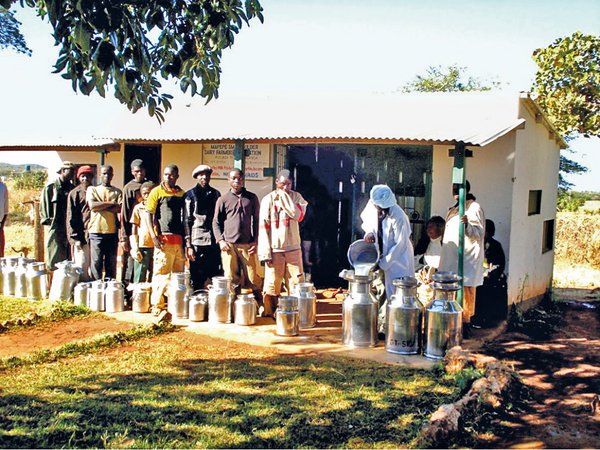 Supporting smallholder farmers is one of the best ways to fight poverty and ensure food security. Such support involving the active participation of smallholder farmers in Zambia has demonstrated a significant increase in farmers’ engagement in general and an improvement in milk production, resulting in nutritional food security both at household and national level and income for the poor farmers.

Making smallholder dairy production more competitive is becoming a powerful tool for reducing poverty, raising nutrition levels and improving the livelihoods of a large number of rural poor people. The dairy is an activity 365 days a year, unlike crop farming, where farmers depend on rain-fed agriculture. This presents a unique opportunity to establish sustainable dairy chains that can meet the demands of local consumers and of the regional market, as can be seen in the following example.

Zambian smallholder dairy farmers achieve relatively high incomes per litre of milk. They are also comparatively resilient to rising feed prices as they usually only use a small quantity of purchased feed during the dry period of the year. Moreover, there is a growing demand among consumers in the region and the country as a whole for milk and dairy products, driven by population growth and rising incomes. However, smallholder dairy production will only be able to reach its full potential if some of the challenges the sector is currently facing are addressed. Smallholder farmers lack the skills to manage their farms as ‘enterprises’. They have poor access to support services like production and marketing advice, and they have little or no capital to reinvest and only limited or no access to credit. Moreover, they are handicapped by having no dairy breed or genetic improvement programme, resulting in a low milk yield potential.

Over the last few years, a wide range of activities have been launched to address these challenges. One example is the initiative by the Golden Valley Agricultural Research Trust (GART), a public-private partnership founded in 1993. In collaboration with several stakeholders, among them the Zambian Government, Land O’ Lakes, Common Fund For Commodities, Heifer International, European aid agencies, and milk processors such as Parmalat, Creamwell and Zammilk, various measures were carried out along the entire value chain, including training, exchange visits, improving market access and improved feeding, pasture and fodder conservation. Here, both local and dairy cross breed cattle were used – with a view to dairy genetics improvement through artificial insemination and restocking taking place in the future.
As a result, a dramatic change has been seen in smallholder dairy development, resulting in increased milk volume delivery through improved productivity of milk per cow from 2 litres per day in 2004 to 5 litres per day in 2014, joining more farmers in milk marketing and improved hygienic and compositional quality of milk attracting better price and acceptability of quality milk by processors. This has enabled better marketing and better income for the farmers. Above all, the establishment of a number of milk bulking points in traditional cattle-keeping rural areas and linking them with processors as well as timely, good and guaranteed payment by the processors has led to considerable improvements in the life of poor smallholders through regular and enhanced income. In the last five years, for example, many new full-time jobs have been created in dairy and dairy-related business, the current number being about 5,000 people. Around 15 youths get employed directly and indirectly after every 100 litres of milk produced and marketed, indicating that dairy is a good employment opportunity in the rural setup of Zambia. Another promising development is that a number of women farmers and female-headed households work fulltime in smallholder dairy business and perform better than their male counterparts. Women are the most likely agents of change, and when women and girls earn income, they reinvest 80–90 per cent of it in their families, compared with only 30–40 per cent for men.

Promoting the establishment of farmers’ organisations like dairy co-operatives at village level and the farmer’s body ‘Dairy Association of Zambia’ at national level was a further important step. These organisations provide small-scale producers access to services like markets for milk including bargaining and negotiating power. In 2001, Zambia had only three functional dairy co-operatives that were receiving about 500 litres of milk per day. By the middle of 2014, there were 52 active dairy co-operatives, owned and managed by 7,800 smallholder dairy and traditional cattle farmers receiving more than 80,000 litres of milk per day. The share of smallholder dairy production in total liquid milk going into dairy processing industry in Zambia was raised from 5 per cent in 2005 to 30 per cent in 2014. The main dairy products processed in Zambia by four big dairy processors and another 14 small-scale dairy processors include fresh pasteurised milk, UHT, fermented milk, butter, cheese, cream, ice-cream and milk-based juices and sweets. Nearly all the products are consumed within the country, with a little export to the Democratic Republic of Congo by Parmalat, although opportunities exist for export in the region once more volume of milk is available to processors to run their full capacity.

The total annual production of milk in the country is estimated to be about 300 million litres, with 25 per cent supplied by commercial farmers, 13 per cent by smallholder farmers and 62 per cent by traditional cattle keepers. Of this, only 95 million litres is processed, and the rest remains in the informal market and for home consumption. An attempt was started in late 2013 and 2014 to commercialise the potential availability of milk from the untapped traditional cattle keepers to mop the milk into the formal market by establishing 16 milk bulking points in Southern, Lusaka and Central Provinces. It is estimated that the traditional sector alone from 15 districts of Zambia having major cattle populations in Southern, Central and Western Provinces could contribute up to about 57.5 million litres of milk per year to the formal market if market development and infrastructure were to take place in the above traditional cattle-rearing areas and they were linked with processors. Recently, the measure has been complemented through a ‘loan a cow’ scheme by the Zambia National Commercial Bank and Dairy Association of Zambia, who have imported more than 400 dairy incalf heifers this year, and most of them are located in the milk belt area of Southern, Central and Lusaka Provinces. Farmers have already started delivering milk to dairy co-operatives, contributing to increased volume of milk in 2014.

In 2005, about 483 active smallholder dairy farmers from Southern, Central and Lusaka provinces delivered 1.4 million litres of milk, receiving 370,000 US dollars (USD), while in 2013, a total of 1,219 active farmers delivered 5.5 million litres, worth 2.7 million USD. By the end of 2014, given more traditional cattle farmers who have already joined dairy and a new processor having established a dairy plant and the establishment of new milk bulking points, about 1,985 active farmers could have delivered 9.4 million litres, receiving 5.5 million USD in the Southern, Lusaka and Central Provinces alone.

The contribution of the livestock sector to nutritional food security, poverty alleviation and sustainable economic growth can be further improved with renewed commitments from major stakeholders and a review of pro-poor farmer policy, especially regarding market access, trade, dairy breeding stock availability and their improvement, as well as soft loans with little or no collateral. If this is further strengthened, a huge potential could open up in Zambia for attracting new markets and trade partners, the inflow of private investment for new production technology and food for niche markets. The author firmly believes that even for other countries with scenarios similar to that seen in Zambia, intervention in smallholder dairy is an assured path of sustainable development in the area of nutritional food security, job creation for youths and poverty reduction, resulting in enhanced rural development.