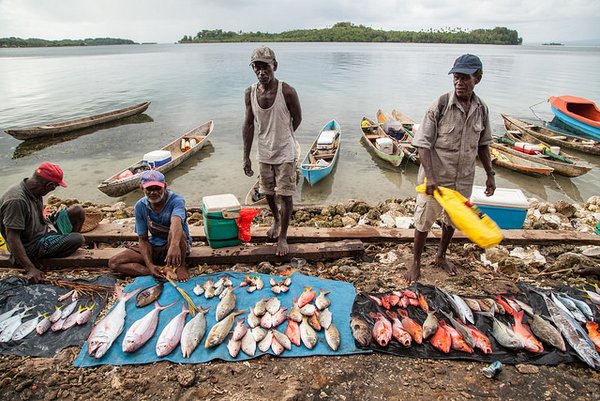 Around 60 per cent of the fish consumed in Europe currently comes from non-European seas.
Photo: © Filip Milovac/ WorldFish

With its educational and information campaign “Fish Forward”, the World Wide Fund for Nature (WWF) seeks to draw attention to the links between fish consumption in the developed world and the conditions people are living under in the developing countries.

Whether it is eaten fresh, filleted, in sushi or baked, fish is regarded as high-value and healthy food that represents a key source of protein for billions across the world. In 2012, 2.9 billion people obtained a fifth of their animal protein from fish. The United Nations Food and Agriculture Organization (FAO) estimates that the livelihoods of around twelve per cent of the world population depend on fisheries and aquaculture (FAO 2014).

Continuous population growth worldwide, increasing urbanisation as well as higher income and living standards are putting pressure on the demand for fish everywhere. Statistics show that already, fisheries are taking a maximum from the wild fish stocks. Any further increase appears to be unrealistic, and alone in order to maintain today’s annual global catch of around 80 million tonnes, the recovery of the overfished stocks has to make progress.
Overfishing indeed is the biggest threat to our ocean´s health. Not only is overfishing jeopardising the natural resources, but it is also creating a massive socio-economic problem.

Europe is the largest importer of fish worldwide. Bottlenecks occurring in self-supply now and then are made up for by imported fish. Around 60 per cent of the fish consumed in Europe currently comes from non-European seas. Around July, Europe has eaten up “its” fish from its own waters by the middle of the year, which does not stop the consumption of fish. From the statistically determined day on which Europe's dependence on imported fish begins, we eat fish that is missing elsewhere – both as food and as a pillar of (support for) the local economic structures.

It has been estimated that worldwide food demand is going to double over the next 35 years, and the question arises how to address the looming protein gap. We definitely need to radically rethink the way fishing is practised. And we have to assume the responsibility that we have as consumers in Europe, which also includes food security and maintaining the livelihoods of people in developing countries. The European Union took up this issue by declaring 2015 the “European Year of Development, EYD2015”.

And the World Wide Fund for Nature (WWF) is devoting its activities up to 2017 to precisely this topic with the Europe-wide project “Fish Forward”. This is a broad-based educational and information campaign that seeks to sharpen awareness among all actors of the links between fish consumption in the developed world and its impact on the living conditions of people in developing countries. The project is being co-financed by the EU.
For me as a consumer in Europe, I have a choice – I just have to be aware of it. We are familiar with fish in various shapes and colours, and every day, we have a large and colourful range to choose from. In the producing countries, many people do not have this choice. On the contrary: they depend precisely on what their coastal seas provide them with. Through our purchase decisions at the shop counter, we can influence the promotion and development of sustainable fisheries that have to be maintained for people at local level in the long term.

For this work, we require various analyses some of which are of fundamental importance. For example, we wish to establish the maximum contribution that sea fisheries will be able to make in 2050 in order to cover global protein demand. To this end, we are examining two scenarios: sustainable fisheries and carrying on with the status quo. The results are to strengthen our arguments for improvements in fisheries management throughout the world. And they may help a growing supply of sustainably produced fish will not only ease consumer conscience in Europe but also create measureable improvements for the fishers and fish breeders in the developing countries.