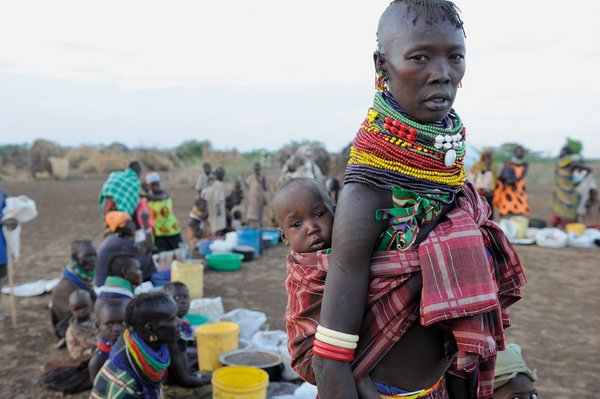 Countries of the South are far more vulnerable than industrial countries

State failure is one of many causes of human and community vulnerability. Global policy-makers must therefore find ways of increasing people’s resilience to crises. The following article explores key approaches in rural regions.

However, global risk assessments of this kind often obscure the fact that there are wide variations in vulnerability to this type of hazard around the world. A country such as Japan can cope with the impacts of an earthquake of a certain magnitude far more effectively than Haiti, long-term drought affects people in the Sahel much more severely than people in Australia, and the impacts of a sharp increase in food prices are felt far more acutely by the poor in developing countries than by the average supermarket customer in an affluent region of the world.

In order to paint a realistic picture of the political, economic, societal and natural risks to individuals and communities, it is not enough to take an objective set of benchmarks – such as the strength of an earthquake, the duration of a drought, or a food price hike – as the basis for evaluating the impact of a harmful event; the different levels of vulnerability must also be factored in. Vulnerability is calculated as the function of three factors: susceptibility, i.e. a population’s likelihood of suffering harm; lack of coping capacities, meaning capacities for a direct response to the impact of a given hazard event and for reducing its negative consequences; and lack of adaptive capacities, which refers to long-term strategies to avert risks and harm (cf. WorldRiskReport 2011). 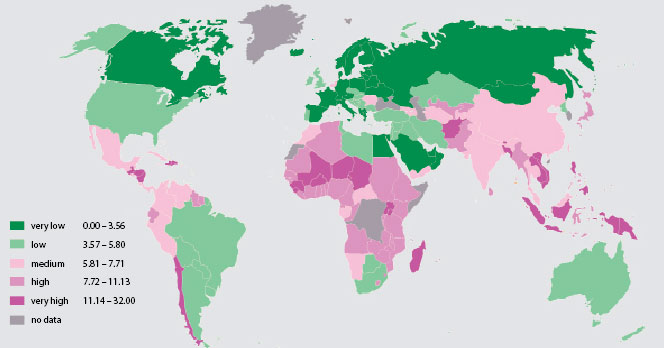 The figure on page 11 depicts the World­RiskIndex map. The concept of the WorldRiskIndex is based on the core understanding of risk as relating to natural hazard events (earthquake, flood, storm, drought, sea level rise). In principle, however, this concept can also be applied to hazards in other risk categories, especially economic and societal. Due to their very high exposure to natural hazards, countries in Asia and Latin America – including the Philippines, Bangladesh, Timor-Leste, Cambodia, Guatemala, Costa Rica and El Salvador – have a very high disaster risk (see Table on p. 11).Three island states – Vanuatu, Tonga and the Solomon Islands – are among the 15 countries with the highest disaster risk. It would appear that this is mainly due to the extremely high exposure of these countries, for in terms of vulnerability, these islands perform significantly better than many other countries. However, their coping and adaptive capacities are not yet sufficient to substantially reduce their disaster risk. By contrast, Japan, Chile and the Netherlands – all belonging to the 15 countries with the highest exposure to natural hazards – have sophisticated disaster preparedness systems, with highly developed coping and adaptive capacities, such that these three countries are ranked 35th, 25th and 69th respectively in the WorldRiskIndex (cf. WorldRiskIndex 2011).
Focusing solely on vulnerability – one of the factors used to calculate the World­RiskIndex and defined as a function of susceptibility, coping capacities and adaptive capacities – Afghanistan has the worst performance, followed by a number of African countries and Haiti (see Table and Figure on p. 12).

Reducing exposure to hazards: a task for global policy-making

Exposure to risks puts people’s lives and physical safety in jeopardy. Harmful events – which may be caused by long-term progressive degradation and destabilisation processes, as well as by sudden disasters and “shocks” – can impede or reverse development. Devastating floods such as those which occurred in Pakistan can wipe out years of hard-won development progress and deprive people of any further development prospects for a long time to come. For that reason, development policies must aim to minimise risks and implement appropriate preparedness measures. Broadly speaking, this means reducing exposure to the “hazard”, on the one hand, and reducing “vulnerability”, on the other.

In practical terms, it is almost impossible to influence the “classic” hazards. Human communities have always been exposed to the forces of nature. Droughts and floods feature in the Bible and are described as “acts of God” – the product of divine will. With the onward march of progress, however, humankind has created its own potential hazards which have far-reaching implications. Large-scale deforestation along the upper reaches of rivers has increased the danger of disastrous flooding, and poor management of arid regions has worsened desertification. And of course, human-induced greenhouse gas emissions are changing the global climate, as is apparent from the increasing frequency of extreme weather events, with all their attendant effects, and melting ice caps, causing sea level rise. Human-induced hazards are thus becoming increasingly prevalent, alongside natural hazards. Finding ways to curb these human-induced hazards is now a task for global policy-makers, not only because a failure to do so would cause irreversible changes with incalculable new risks, but also because these hazards will otherwise impact with increasing severity on already vulnerable people and communities.

New “human-induced” hazards have also arisen outside the ecological sphere, however. A greater spatial division of labour and integration into a globalised economy have had major effects, particularly a substantial increase in prosperity, and have provided considerable impetus for development. However, as demonstrated by the food crisis which has caused extreme price volatility over recent years, this has created new hazards to which many people are defencelessly exposed (cf. von Braun and Tadesse 2012). Here too, global policy-making has a role to play in mitigating these hazards and ensuring that regional and globalised markets become an opportunity, not a threat, for vulnerable individuals and communities.

The effects of the new “human-induced” hazards are felt on a global scale, so averting these threats requires a concerted approach by the international community. Global Risks 2012 therefore highlights global governance failure – defined as weak or inadequate global institutions combined with competing national and political interests – as one of the especially significant and cross-cutting risks in future.

By contrast, reducing vulnerability and strengthening resilience is primarily a task for individual states. If countries lack the requisite capacities of their own, the international community steps in with assistance, particularly in response to acute disasters. Development cooperation, in turn, can provide additional support in order to boost general self-help capacities and reduce vulnerabilities
(= capacity-building). 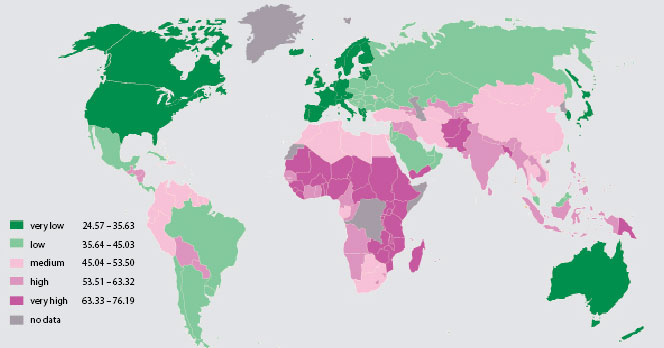 While it goes without saying that governance measures, backed by development cooperation, can go a long way to building human and community resilience, there is one salient factor which greatly impedes this process, namely that human vulnerability correlates very strongly with weak statehood. Almost all the 15 most vulnerable countries (top 15) identified in the Table on the right score very high in various fragility league tables. These are countries with poor governance, weak state authority, and a low level of legitimacy. Above all, they have poor or non-existent capacities to deliver basic services (welfare, education and health) and minimal ability to guarantee the rule of law. What’s more, they generally lack the ability or inclination to collect taxes on the scale that is necessary to carry out much-needed infrastructural investment and establish a properly functioning administration.

The recent famine in the Horn of Africa has clearly demonstrated the complexity of the factors contributing to the local population’s high level of vulnerability. Prolonged and severe drought, resulting in a dramatic decrease in harvest yields, and poor availability of water and animal feed were among the hazards which triggered the crisis. But why did the drought have such devastating effects? Which factors caused the human vulnerability in this region? The causes lay in a much more deep-rooted chain of circumstances: resource degradation that is often triggered by unsustainable population growth, restrictions on the mobility of nomadic communities, a lack of capital reserves, an absence of alternative sources of household income, soaring international food prices and dysfunctional markets, protracted political conflicts (especially in Somalia), underinvestment in agriculture throughout the region combined with a lack of regional economic and trade links, general neglect of rural regions, and centralist development policies.

Droughts are essentially a natural phenomenon. By their very nature, this is unlikely to change, but human-induced climate change is an exacerbating factor. A drought is an “act of God”, but a famine caused by drought is not. Famines can be controlled; better still, they can be avoided. This is just one example, but it is typical of the broader challenge which invariably arises in averting risks and avoiding crises. A policy which not only focuses on crisis management but also adopts a precautionary approach by tackling the various causes of people’s extreme vulnerability in a given region, with a view to boosting their reliance, must address all these causal factors. However, isolated measures are not enough in order to find a solution. Instead, all the various sectoral policies must be integrated into a holistic regional strategy whose aim is to boost human and community resilience.

The most vulnerable countries

Here, rural development, as a multisectoral and territorial approach, has a key role to play. Integrated approaches to rural development often failed in the past – perhaps because of their own complexity, an overstretching of local capacities, and overly optimistic assumptions about the extent to which processes can be planned. However, there is now a sober recognition that the isolated sectoral policies which usurped integrated rural development have certainly not led to more effective sustainable development outcomes in the regions concerned, nor have they boosted local communities’ resilience.

Areas of action to reduce vulnerability

What is needed in future is a renewed effort to introduce more complexity with a spatially integrated approach. This will require a certain amount of courage, coupled with realism and a sense of proportion. Against this background, two key issues arise:

The development of rural regions, long neglected, will require reform processes to be initiated in four sectors (cf. BMZ 2011): revitalisation of the rural economy, management and sustainable use of natural resources, provision of social services and technical infrastructure, and a general improvement in political and institutional conditions. The purpose of these reform processes is to achieve improvements in those particular areas which are vital for reducing vulnerability and increasing resilience (see Table above).
As shown in the Table, the action to be taken in most of these areas is likely to be most effective if implemented by well-performing governance structures. The conditions prevalent in failed states greatly impede efforts to boost resilience, but do not necessarily condemn them to failure from the outset. In weak or failed states, it is essential to strengthen social mechanisms which, despite – or perhaps even because of – weak statehood, allow affected communities to develop at least a modicum of self-help capacity (cf. GTZ 2008). These mechanisms mainly take the form of social networks, such as community support, kinship groups, and the types of network which spring into action when disaster strikes and help to mitigate its adverse effects. Generally speaking, the complex interaction between governance and civil society must be a mechanism for increasing resilience (cf. WorldRiskIndex 2011).

Multisectoral concepts of rural development are familiar to us all. After a long period of neglect, they are, happily, gaining ground again in development cooperation. Implementing these concepts is standard practice in functioning states, but efforts to initiate rural development measures in conditions of fragile statehood means entering new territory, and will involve a process of trial and error, at least for a time. Tried and tested approaches to boost food security, such as those customarily applied in crises, disasters and conflicts, will be an important element and starting point for these efforts. For the wider purpose of preparedness, however, rural development should adopt a much broader reach.

A further difficulty is that implementing these concepts requires patience, as it involves structural interventions; rapid successes therefore should not be expected. Nonetheless, this should not prevent us from using rural development mechanisms as part of a long-term strategy to boost human and community resilience as a key element of crisis and disaster prevention. After all, there seems to be no other option.