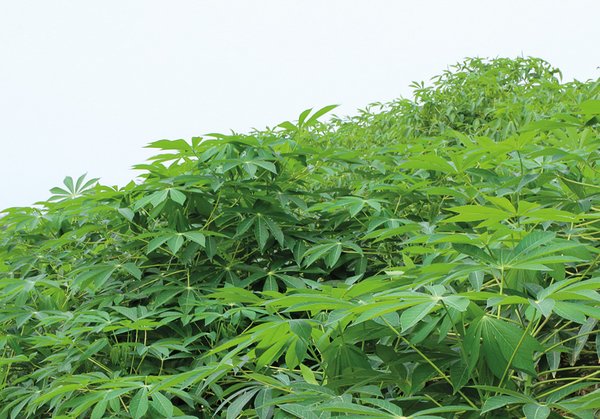 Cassava leaves could play a key role in food security. Research at Hohenheim University is examining the optimal way to treat the leaves.
Photo: T. Wojciechowski

Cassava – how to explore the “all-sufficient”

Making better and more diversified use of plants in order to benefit from existing resources is one of the targets that the bioeconomy has set itself. As a rule, however, this means that first of all, a lot of research has to be carried out, as the following example of Cassava shows.

Cassava is widely grown in nearly 105 tropical and subtropical countries with an estimated production of 263 million tonnes in 2012. The plant is considered as a 21st century crop as it responds to the global economy trends and climate change challenges. Cassava is a staple food for one billion people, but it is equally important as a source of feed and industrial applications, and is also an energy source, making it ideally suitable for cascade use (see article "Increasing resource efficiency by cascading use of biomass").

After processing, cassava roots provide flour for human consumption. Bread, crackers, cakes and ice cream cones are produced from cassava flour. Cassava root starch is a high value commodity in brewing, textile, pharmaceutical, paper and oil industries. Cassava starch can also be a source for platform chemicals and ethanol production. Native starch is modified by physical, chemical or enzymatic processes to obtain different modified starch having numerous applications, e.g. preparing different types of foods, textile sizing, high-quality paper and animal feed. By using starch and modified starch, bio-/photo-degradable plastics can also be produced. Various sweeteners can be prepared from cassava starch by hydrolysis with acidic and enzymatic substances or a combination of both. Acetic acid, citric acid and itaconic acids prepared from cassava starch can be used in food industry and for producing synthetic resins, plastics and rubber products. Cassava leaves are used as food, feed and to raise silkworms, while mushrooms can be grown with the ground stems. Finally, the waste from the cassava field and processing industry can be used to produce biogas.

From waste to food: making use of the leaves

There is still a big potential to explore cascade uses of cassava. Postharvest loss is a serious concern which needs to be addressed while introducing innovative processes. A huge amount of waste generated in the form of peel, pulp, wastewater and leaves during post-harvest processing of cassava causes severe environmental problems which need to be converted into valuable products and energy in an environmentally friendly manner. One of the plant’s most valuable wastes is cassava leaves. They are rich in protein and nutrients and should be utilised properly in order to tackle food insecurity and undernutrition prevailing in developing countries. Therefore, we are going to focus more on the cassava leaves as an economical and sustainable source of protein and nutrients.

The global demand for protein is increasing tremendously. According to the UN Food and Agriculture Organization (FAO), world-wide meat consumption is estimated to reach 463 million tonnes by 2050, requiring a huge amount of feed protein which will be hard to produce in an eco-sustainable way. On the other hand, plant protein (mainly of legumes, grains, nuts and seeds) evidently contributes to meeting the demand for food protein world-wide. In order to cover increasing protein demand, it is necessary to explore new protein sources. Cassava leaves are one of these interesting sources. However, they are generally considered as waste or as an inferior by-product and are only used for human consumption in small quantities.

Cassava leaves contain high amounts of protein (17.7–38.1 % on dry weight basis). In addition they are a rich source of vitamins, B1, B2 and C, as well as carotenoids and minerals. The total essential amino acid amount in cassava leaf protein is similar to that of a hen’s egg and greater than that of spinach leaf, soybean, oat or rice. The Congolese call cassava ‘all-sufficient’ as they can get bread from the roots and ‘meat’ from the leaves. Cassava leaves are available throughout the year and should be given as much attention as the roots.

Cassava leaves are consumed in various cassava-growing countries when people don’t have alternatives. Toxicity and antinutrients limit the consumption of cassava leaves as food. Cyanogenic glucosides (linamarin and lotaustralin) are responsible for the toxicity of cassava leaves, which is 5–20 times higher than that of the roots. Hence the consumption of cassava leaves may cause cyanide poisoning having symptoms like headache, dizziness, nausea, diarrhoea and vomiting, sometimes leading to death. These toxic and antinutritional aspects must be addressed properly during processing before consumption. Various cassava leaf processing methods have been developed. Drying, pounding and long periods of boiling are the traditional methods for preparing cassava leaves, while pounding cassava leaves in a wooden pestle and mortar for 15 minutes followed by boiling in water for 10–120 minutes is the most common method. According to the literature, even ten minutes of boiling may reduce 60 per cent of vitamin C content, and considerable losses may occur regarding vitamin A and the vitamin B group. Boiling may also denature the native enzymes (linamarase and hydroxy nitrile lyase), which are responsible for the breakdown of toxic compounds (linamarin and acetone cyanohydrin, respectively). Most of the processing methods are not able to completely detoxify the cassava leaves to the safe consumption level; there is still a need to develop efficient, simple, and low-cost processing methods to deal with not only toxic but also antinutritional aspects, low digestibility and bad taste while retaining all the key nutrients.

Cassava leaf protein utilisation is also limited by the presence of high levels of chlorophyll, xanthophylls and fibre, which can be overcome by extracting juice from the leaves, followed by coagulation to get leaf protein concentrate (LPC). Chopped, ground cassava leaves are pressed and coagulated with steam injection. Several studies have been carried out on the preparation of LPC, but a wide variation has been observed in terms of extraction efficiency, nutritional value, methionine and lysine, which may be due to the extraction methods and tannin contents in different cassava varieties and cultivars. Ultimately, the attempts to prepare LPC on an industrial scale failed because of low protein recovery with high contents of tannins and the low digestibility of the residue fibre. Further work is needed to develop novel technologies with high protein recovery and valuable by-products. In another approach, cassava leaf meal (CLM) or cassava pellets can be prepared by pressing cake or whole leaves and stems by reducing the moisture content (15–20 %) either with sun drying or mechanical pressing.

Food insecurity prevails not only among the 842 million people of the world who are hungry but also among the three billion people who can cover their minimum dietary energy requirement but suffer from various diseases caused by undernutrition (or malnutrition). After the successful development of suitable processing methods, cassava leaves have the potential to provide an enormous protein and nutritional source to the vast majority of the population and hence can increase food and nutritional security.

Cassava protein for nutritious diets
Based on consumer preferences, nutritionally balanced foods (snacks) or modified traditional foods can be prepared with cassava leaves to provide the required amount of protein, minerals and vitamins. Similar efforts have already been made in Brazil to combat malnutrition especially for pregnant women and children. A food supplement called ‘multimistura’ has been prepared by using cassava leaf powder as one of the ingredients. A typical cassava leaf dish including fish, capsicums, groundnuts and onions is prepared in Sierra Leone. Such food products need to be promoted in order to encourage cassava leaf consumption as a valuable component of the diet instead of associating them with poverty. Fortification of common food items with protein and nutrient-rich cassava leaves can be a sustainable and cost-effective approach to dealing with protein and micronutrients deficiencies in millions of people.