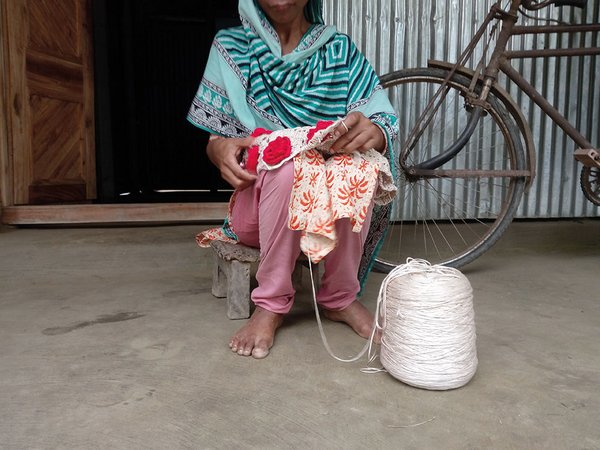 Business challenges for poor women with disabilities in rural Bangladesh

Women with disabilities living in rural areas are the most disadvantaged and oppressed people in Bangladesh. This article centres on a case study looking at business challenges that women entrepreneurs with disabilities experience in rural areas. Our author argues that a more gender-friendly environment and better consideration of disability during policy design and implementation could help disabled women to be more productive and successful entrepreneurs, and to overcome social and financial hardships.

Bangladesh has a population of more than 165 million, 6.94 per cent of whom have some form of disability. A significant number of poor people with disabilities live in rural areas, where they face negative attitudes based on stigma and prejudice and are treated as a burden on their family and society. This is especially the case for women with disabilities, who generally have poor health, inadequate nutrition and less access to medical services. The majority of these women lack basic education, and it is hard for them to find employment opportunities. In many cases, they are ostracised by their families. They have reduced marriage prospects and suffer higher rates of abuse and violence. Although different disability policies and acts are in place in Bangladesh, people, and especially women, with disabilities are yet to be socially and economically empowered. To tackle this problem, some Non-Governmental Organisation Microfinance Institutions (NGO-MFIs) in Bangladesh recently started providing microfinance to economically active people with disabilities, particularly women, with poor access to formal financial services. These schemes have yet to prove their effectiveness.

The case study “Business Challenges for Poor Women with Disabilities in the Rural Areas of Bangladesh” was conducted in the North of the country in association with the NGO Thengamara Mohila Sabuj Sangha (TMSS). Five economically active women with disabilities were interviewed who were involved with income generation activities – mainly in small businesses. Their average age was 30 years. Two women had physical disabilities, two had multiple disabilities (physical, poor vision, hearing impairment), and one was blind. Two of them had no education, two had primary school education, and one had high-school education. They were involved with selling chickens, rearing goats, and dress and cap making.

Salma Akhter (the name is a pseudonym), aged 22 years, has physical and hearing disabilities, and her speech impairment deters her from going out and meeting up with people. She completed high school but was unable to go on studying because of her disabilities. Her family wanted to arrange marriage for her, but she rejected this, fearing she could have children with disabilities. Salma Akhter wanted to consult doctors for health treatment but could not afford that. She then decided to start her own business to become financially independent. She needed credit for her venture and, despite her disabilities, and with the strong support of her family and neighbours, she received support from a local microfinance institution and started a dress-making business. Her physical disability kept her from working long hours, while her impaired hearing ruled out her visiting the local market to sell her products, making her dependent on a wholesaler buying them. The intermittent nature of her business meant there was no regular income. She nevertheless had to make weekly debt repayments.

The problem of credit

To do business in the area studied, women with disabilities need capital to purchase raw materials for production. But accessing capital is hard for them as they are mostly living in poverty. Their families typically cannot provide money or even borrow it themselves. Moreover, there is a scarcity of financial institutions, especially banks. Local money lenders charge higher interest for credit. The other option is to seek credit from NGO-MFIs, whose interest rates are still high, but lower than those of the local money lenders.
A blind woman addressed in an interview initially fared worse accessing credit, being rejected by a credit officer because she had no education and could not sign the credit documents. Finally, thanks to the credit group member’s positive endorsement, she did receive credit. In such cases, when credit is provided, it is typically with harder conditions, such as stricter repayment and tougher credit checks. Another participant in the interview stressed that MFI’s staff were generally particularly reluctant to award credit to women with disabilities due to stigma and prejudice.

The study found that women with disabilities who access NGO-MFI financial services were doing business, but that poor business opportunities limited income levels. Most of the businesses in the study area were seasonal businesses. “Once I produce dresses, a middleman comes and picks them up. He sometimes returns to order more products. I can’t sell throughout the year – most products are seasonal. So, we cannot generate enough income for our living,” said Salma Akhter.

Although the participants in the study were involved with income generation activities, they had less access to existing markets to sell their products and fewer opportunities to collaborate with the value chain owing to their disabilities. Not being able to access the market directly, the women had no choice but to sell the finished products to middlemen, who usually also set the prices. For example, one woman with a physical disability running a poultry business was offered prices below normal by wholesalers. Her disability made it hard for her to visit local markets and interact with other businesspeople.

Business success depends heavily on financial literacy, especially on money management skills. Only two of the participants in the study had received business skills training. Inadequate or lacking education limited the participants’ capacity to use credit effectively and to achieve business success. The two participants who had received training said they did not understand the complex training materials, which were neither disability-friendly nor suited to the needs of the different types of disability.

Due to limited mobility and unfriendly transport facilities, the women usually conduct businesses from home, which further limits their potential to earn more income. It incurs costs, reduces production and disrupts communication with other businesspeople and existing markets. Moreover, it raises dependence on wholesalers or other middlemen.
The study further found that women with disabilities were less willing to take risks, especially in diversifying their businesses, e.g. starting another business alongside their existing one. This was mainly due to long-term deprivation and exclusion from society, which leaves such women in a more vulnerable position.

The women believed they could have been more successful if they had had no health issues. When they got sick, they would mostly depend on family members, and often, these became reluctant to extend their support. Hence addressing health issues poses a serious barrier to women with disabilities to being involved with income earning opportunities.

Running any business as a sole trader is challenging, especially when the person gets sick. Women with disabilities are more likely to be unable to work, while their health and social isolation makes them more prone to get sick, meaning they need a support network and access to healthcare. Besides helping their family members financially with the income they had earned, two of the participants were able to afford purchasing medicines and visiting a doctor thanks to their business activities.

The study suggests that amongst disadvantaged persons in rural Bangladesh, women with disabilities who were perceived as incapable of engaging in business activities showed that they could be self-employed and contribute to society, challenging the notion that women with disabilities are not ‘worthy’. Rather, they are capable of realising their potential when they get the opportunity. However, they require a disability-friendly enabling environment to achieve their full potential and contribute to their livelihoods and the rural and national economy.

Since women with disabilities are often kept hidden by their families in rural areas, local political and community leaders could be engaged to identify and provide services to them. Accessing such services would enhance their capacity to engage with people outside their home and build social connections. To empower people with disabilities, it is important to build social networks, especially in rural areas, so that they can meet each other, share their stories and motivate each other for their livelihoods. Sharing their stories locally and globally can inspire others who are willing to do something. Moreover, networks outside the family could eventually support them in building confidence and succeeding in their businesses.

This study further found that since microfinance projects for people with disabilities are mostly funded by donor organisations, the sustainability of these programmes is always a concern. Once funding is over, the project will be no more. Thus, providing sustainable funding for greater financial inclusion of women with disabilities remains a critical aspect.

Women with disabilities need access to education, business-related training and information allowing them to make informed decisions about business activities. Various disability and rural development policies have been formulated in Bangladesh for empowering women with disabilities, but most of them are yet to be implemented effectively. A particular focus on gender and disability inclusion is needed for rural areas to support the development and empowerment of these women.

Debashis Sarker is a PhD research scholar at the School of Social Science, The University of Queensland, Australia. His research focuses on the economic and social empowerment of people with disabilities, financial inclusion, microfinance and poverty. He is an Australian Government Research Training Program scholarship recipient.
Contact: d.sarker@uq.net.au