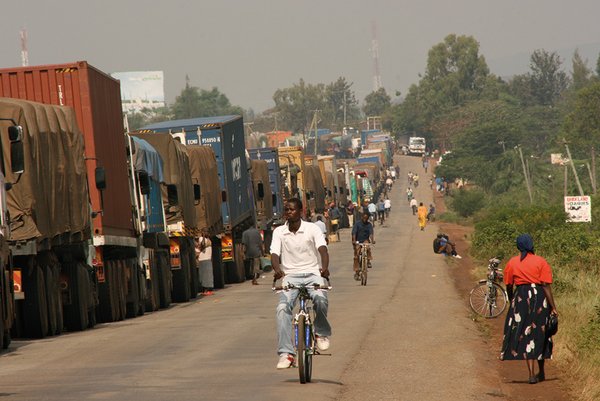 Lorries queuing at the Malaba border in 2010.
Photo: TMEA

East Africa is a region severely affected by extreme poverty. Enhancing trade could help tackle the problem, although a number of obstacles need to be cleared. TradeMark East Africa, acting in the context of the Aid for Trade (AfT) Initiative, seeks to boost international trade by interventions in trade-related infrastructure.

Extreme poverty remains a major impediment to economic growth in sub-Saharan Africa. Seventy-two per cent of the population, an estimated 585 million people, lack the bare necessities of life. According to the United Nations Development Programme (UNDP), the region remains one of the most unequal in the world. One of the key strategies in tackling extreme poverty in sub-Saharan Africa, and especially in the East African Community (EAC), is to enhance the trade environment and increase the region’s ability to trade.

Globally, the international trade environment has been improving since the 2005 launch of the Aid for Trade Initiative (AfT), by the World Trade Organization (WTO). The initiative helps developing countries to trade by tackling and eliminating trade related infrastructure and policy obstacles that stifle their ability to engage in international trade. AfT provides assistance to developing countries to build their physical infrastructure and human and institutional capacity to trade. This includes overcoming constraints such as a lack of productive capacity, excessive red tape or poor infrastructure (see also article "Revitalise the Aid for Trade initiative"). Since the launch of this initiative, there has been an increase in domestic and foreign investments towards enabling developing countries trade. In East Africa, special-purpose AfT vehicles are fast-tracking the process. One of these vehicles is TradeMark East Africa – TMEA (see box at the end of the article).

Approximately 38 per cent of TMEA’s budget supports improving regional and national co-ordination by developing the capacities of the EAC organs, institutions and ministries of EAC in each partner State while around 45 per cent of the budget focuses on supporting infrastructural projects that enhance access to markets. The initiative facilitates interventions in Information and Communications Technology (ICT) for Trade at revenue authorities and related trade agencies, infrastructural development at the ports and key border points. This has not only led to the removal of barriers along key trading corridors but also to a reduction of time taken to clear exports and imports.

As an example, TMEA has partnered with the EAC governments to improve port infrastructure at Dar Es Salaam and Mombasa ports in order to increase efficiency and speed up exiting the ports for imports and exports. Further, the establishment supported construction and operationalisation of 13 One Stop Border posts across key EAC border points. An OSBP is a “one stop” border crossing point jointly managed by neighbouring countries. This allows people or cargo to stop only once at the country of destination, where officials of both countries, seated side by side, stamp immigration or other documents exit (from country of origin official) and entry (by country of destination official) at the same point, thus the “One Stop”. These border posts are contributing to a remarkable reduction of the time it takes to cross the border. For instance, cargo trucks now need just 1.5 hours to exit the newly operational Taveta/Holili Border (between Kenya and Tanzania), compared to a former 6.5 hours. Studies suggest that in sub-Saharan Africa, an average five per cent reduction in time spent at the border could achieve a ten per cent increase in intra-regional exports. In some African countries, revenue losses from inefficient border procedures even exceed five per cent of GDP.

Another example is the facilitation of ICT for Trade. It has enabled regional trade agencies to simplify business procedures, cutting red tape, simplifying rules and documents and making business activities predictable and cheaper. In Uganda, the TMEA supported Uganda Revenue Authority Customs modernisation programme has contributed to slashing transit cost from 3,390 US dollars (USD) to 1,176 USD and reduced time from 34 days in 2010 to 13 days in 2016. Further, these custom reforms have led to a 48 per cent increase in customs revenue from 2.9 trillion Ugandan Shillings (UGX) in 2011 to 4.3 trillion UGX in 2015. In Kenya, improvement of physical infrastructure at the port of Mombasa has contributed to cutting time taken to clear goods through the port from 11 to 7 days. This investment has catalysed over 500 million USD from multilateral donors to fund berth upgrades so that the port handles larger vessels. In Burundi, the support to the country’s Revenue Authority led to an increase in revenue collection resulting to government investing in social services like hospitals and dams, prior to the recent conflict.

Whether it is ICT, physical infrastructure development or advocacy at the policy level, all these projects have complemented each other to lower transport costs, improve efficiency at borders and simplify controls and formalities, thus increasing trade opportunities and improving access to markets.

As these examples reveal, Aid for Trade can be a disruptive innovator. Where traditional aid is slow to mobilise and implement, special-purpose outfits like TMEA are faster and continue to deliver results through strategic partnerships. Frank Matsaert, Chief Executive Officer (CEO) of TMEA, says that the organisation will leverage on partnerships to bring down barriers to trade in the region, and, more importantly, to ensure that the environment is attractive to innovation and investments that will create jobs and open up opportunities that will benefit East Africans from all walks of life. During strategy 2 (2017 to 2023), the organisation’s flagship goal will be job creation e.g. via increased trade which in turn can be achieved through reducing barriers to trade by infrastructure development, removal of non-tariff barriers, standards improvement and adoption of ICT for Trade. TMEA will also support the private sector in enhancing its productivity and competitiveness.

A practical example. The TRAC gave initial funding for a free mobile information service for farmers, called ‘iShamba’ (the Swahili word, shamba, means garden or farm). The idea is to allow farmers to subscribe to mobile information on two crops, or livestock, on which they would receive weekly text messages, with vital facts to assist them in getting the most out of their products. The farmers get up-to-date weather information (straight from aWhere.com, a digital platform offering weather information based on accurate data), farming tips through text messages aligned to the two crops chosen, the season and the region in which they farm as well as market prices supplied by the National Farmers Information Service. iShamba is accompanied by a digital platform allowing farmers to ask a question through a text message, which is translated onto the digital platform where agronomy experts receive and answer it. Equally, farmers can phone straight into the iShamba call centre, manned by specialist staff, with their questions.
Today iShamba has 350,000 subscribers, each receiving free advice on farming practices, the weather and the markets, with regional variations. It also links up with input suppliers, veterinary companies and agribusinesses to give them the benefit of interacting with thousands of potential customers (with possible discounts for subscribers). Recent research that tracked iShamba subscribers against non-subscribers shows that over a six-month period, iShamba farmers had potato yields 50 per cent greater than non-iShamba farmers. The research further revealed that iShamba farmers are more likely to grow a new crop than non-iShamba farmers and that 65 per cent of iShamba farmers change a farming practice as a result of a message received, with 80 per cent of those increasing their output as a result.

About TradeMark East Africa
TradeMark East Africa (TMEA) was established to strengthen trade and markets (hence TradeMark) in East Africa, with the aim of growing prosperity through increased trade. TMEA operates on a not-for-profit basis and is funded by the development agencies of the following countries: Belgium, Canada, Denmark, Finland, the Netherlands, Sweden, the UK and the USA. TMEA works closely with East African Community (EAC) institutions, national governments, the private sector and civil society organisations. It seeks to increase trade by unlocking economic potential through three strategic objectives: increasing physical access to markets; enhancing trade environment; and improving business competitiveness.
To find out more, please visit the TMEA website at  www.trademarkea.com