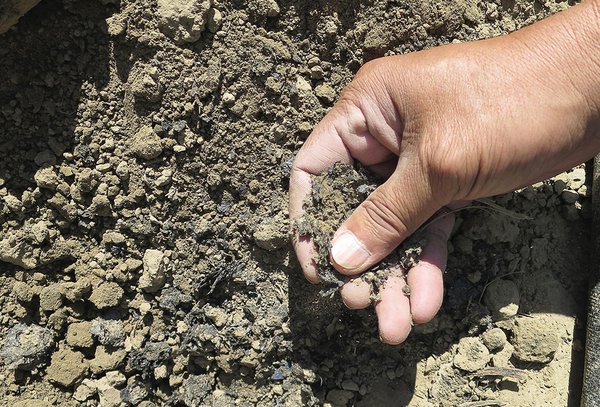 Twelve months after first application on beds (and then being buried in the soil for six months), biodegradable mulch can be easily broken into small pieces.
Photo: AVRDC

Polyethylene sheeting is widely used in vegetable growing to create optimum mulch conditions for seedlings. However, it is a considerable environmental hazard. The World Vegetable Center has tested a biodegradable alternative, which is simultaneously labour- and time-saving, arriving at the result that it is promising but not yet practical.

Mulch is a commonly used technology in small-scale vegetable horticulture in Southeast Asia as it helps to control weeds, conserves soil moisture and increases soil temperature which generally has a positive effect on vegetable yield and quality. Also, by reducing direct contact with the soil surface, the proportion of marketable produce (e.g. green leafy vegetables) can be increased, and post-harvest quality may be improved thanks to reduced soil-derived microbial contamination and the reduction of pesticide inputs for controlling weeds. There are different types of mulch, including rice straw and straw matting, but plastic mulch technology has been widely used and promoted by AVRDC – The World Vegetable Center since its establishment in 1973. Plastic of various thicknesses and colours is widely available on the open market and is used by farmers who can afford the additional input cost. In Taiwan it retails at around 0.07 US dollars (USD)/m2 for material of 35 micrometres thickness which is affordable but yet is a significant contribution to overall costs of production. It can be applied by hand or by machine but in both cases must be strong enough to undergo the application to soil beds without tearing and be able to withstand the initial anchoring process of the plastic to the soil surface.

However, these plastic mulches are made from non-renewable petroleum-based materials, and they are frequently used for one growing season only. Therefore safe and environmentally sound disposal of polyethylene (PE) mulch is a serious issue in terms of the long-term costs to the environment. At the end of the growing season, the plastic film has to be removed, requiring additional labour, and is then discarded (see top right Photo), and disposed of either by incineration (which can release toxic compounds into the air) or through landfill, where it can be very unsightly, occupying large areas of land, and takes many years to fully degrade. More opportunities for the recycling of this plastic waste would be highly desirable, but this is not often practical or possible in Southeast Asia. In Taiwan, it is possible as the recycled material is used in the plastic injection moulding industry, but substantial quantities of recyclable material must be available at a specific location to make this option economical. At AVRDC’s Headquarters, we are using just under three tonnes of such plastic a year, so recycling is feasible.

Looking for alternatives: “Bionolle” put to the test

In order to address this unresolved problem for small-scale farmers, AVRDC is now examining the potential functionality and costs of substituting polyethylene mulch with biodegradable mulch. Such mulches are made from biodegradable polyester or vegetable starches and eventually degrade into water and carbon dioxide, leaving no toxic residues. The time they need until their complete incorporation in the soil varies depending on their composition (they can be extruded with a pre-determined lifetime in the field) and the local environmental conditions and the soil type on which they are applied, and they are clearly a much more environmental-friendly alternative to PE mulch. Such new mulching materials now need suitable testing to assess their agronomic and cost effectiveness.

AVRDC has tested this new material in its technology demonstration garden. The strength of the new biodegradable mulch film proved to be adequate for application in the field by hand or machine but it was evidently not as strong as the conventional PE mulch requiring the initial application process to be handled more carefully. After four weeks in the field in summer 2014 the biodegradable mulch was observed to start to degrade, most evidently on the sides of the bed. After 18 weeks, it had become broken into large pieces and could easily be torn by hand. In contrast, the silver/black PE mulch remained intact and strong. The early break-up of the biodegradable mulch reduced its ability to control weeds and retain soil moisture. Evidently therefore, to use this technology effectively one needs to calculate the likely rate of decay better and then choose a mulch composition quality and thickness to last for the entire growing season of the crop.

The ambient temperature also affects the rate of degradation of the mulch, which progresses faster at higher temperatures because of greater soil microbial action on the mulch. If the mulch degrades too soon, as was the case in this trial, then its agronomic effectiveness is compromised. After harvest, burying the material in soil for a further six months allowed the mulch to degrade into very small fragments which could then easily be incorporated into the soil at the next cultivation.

In this initial test, the material has not yet proven satisfactory for use by farmers in its current state and in tropical conditions, but we conclude that the new mulching material does have a future potential and the concomitant environmental benefits justify further research in this area. AVRDC plans further trials to fine-tune information on biodegradable mulch material thicknesses, quality and their degradation rates over the length of the growing season for specific crops in subsequent seasons.