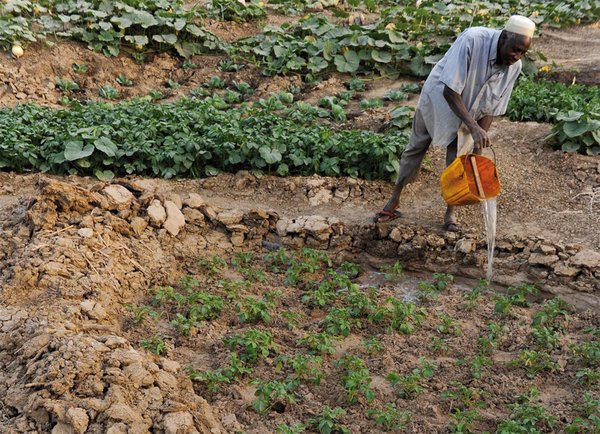 Rapidly increasing agricultural land prices and large-scale investments by local and foreign companies in land in developing countries reflect the risks of land degradation and perceived land scarcity. Yet despite the rising value of land and the growth in business interest, land degradation continues apace. This is due to a failure to investment in measures to prevent degradation in response to the rising demands for land-related products and services.

The Economics of Land Degradation initiative was launched in October 2011 with the signature of a joint memorandum of understanding between Germany, the European Commission and the United Nations Convention to Combat Desertification (UNCCD). ELD offers a strong platform for raising public awareness of land degradation and advocating sustainable land-use strategies. The ELD Secretariat, which is hosted by the Deutsche Gesellschaft für Internationale Zusammenarbeit (GIZ), is responsible for coordinating the work of the ELD initiative, serves as the contact point for partners and provides scientific, political, and financial coordination and outreach activities.
ELD has initiated fundamental research with wide support from a broad group of scientists and research institutions, from political partners, and from the business community (see ELD website). However, the initiative is still evolving and expanding and is open to new cooperation partners.

First achievements and the way forward

ELD conducts independent research work as well as collecting and reviewing existing case studies. The initiative is thus emerging as a knowledge brokering hub for the economics of land degradation. ELD has initiated a number of economic research projects on a global, regional and national level. A number of these confirm that it pays to invest in sustainable land management, since the economic losses due to land degradation and a lack of action are enormous. Alone the annual loss of income caused by desertification is estimated at about 49 billion US dollars. Indirect costs due to forced migration, sickness or famine go far beyond this figure.

Satisfactory economic returns (from 12 to 40 %) have been cited for a number of projects in this field, including soil and water conservation (Niger), farmer-managed irrigation (Mali), forest management (Tanzania), and farmer-to-farmer extension (Ethiopia). Indeed, returns of over 40 per cent are on record for small-scale valley bottom irrigation in northern Nigeria and Niger. Niger loses approximately 8 per cent of its gross domestic product to overgrazing and excessive salinity in rice paddy fields, yet steps to combat these processes would only require a quarter of the costs incurred. According to the World Bank, agricultural investment has a strong record for reducing poverty. The overriding imperative for investing in drylands is, therefore, poverty reduction.

Further attention to the topic has been raised by a call for proposals for new case studies. The resulting work will contribute to our knowledge on the ELD and to the development of joint methodologies. Moreover, the initiative is collecting examples and data from the business, government and scientific sectors with a view to drawing up guidance for all three sectors by the beginning of 2015.

Further activities include promoting the ELD initiative by, for instance, establishing a complementary research network on ELD issues among German research institutions, and capacity building by developing e-learning courses and facilitating trainings and workshops to foster the inclusion of the ELD in decision-making processes.
You can follow the ELD initiative here: www.eld-initiative.org