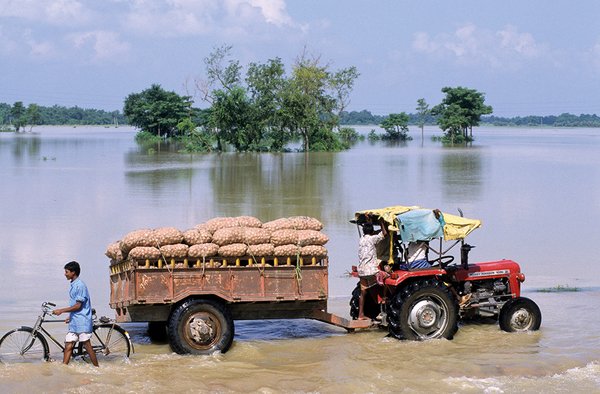 At first glance, global commodity flows and sustainable development do not exactly seem compatible. But the following article shows that international trade can indeed contribute to addressing critical food security and sustainability concerns in agriculture, including by offsetting climate change-induced production shocks. It also argues that good-faith environmental policies in agriculture are compatible with global trade rules but cautions against the possible challenges they may pose to developing countries.

One of the greatest challenges facing the global food system is feeding nine billion people by 2050 and responding to the rapidly changing diet of a growing middle class in urban areas. Part of the solution involves improving access to food by the poor, which would however also require raising production by an estimated 50 or 70 per cent. This is likely to put significant pressure on already stretched natural resources such as land or water. Growing production could also raise greenhouse gas (GHG) emissions, which, according to the Intergovernmental Panel on Climate Change (IPCC), already represent nearly a quarter of global emissions when counting together agriculture, forestry and other land use. In short, the challenge is to improve access and productivity in a way that protects biodiversity and rationalises the use of water at a time when food systems become increasingly vulnerable to climate change.

Besides boosting productivity, especially for smallholders, international trade is likely to play a critical role in this equation. Since the turn of the century, agricultural flows have roughly tripled, reaching 1.2 trillion US dollars (USD) in 2015. Today, non-LDC developing countries account for more than 40 per cent of world imports and over 45 per cent of world exports compared to 26 and 34 per cent respectively in 2000. According to the Organisation for Economic Co-operation and Development (OECD) and the Food and Agriculture Organization (FAO), in the next decades, imports will boom in Asia and, to a lesser extent Africa, as a result of income and population growth, while exports will become more concentrated among fewer countries. Relying more on just a few countries to supply global markets for key commodities could increase risks associated with disruptive trade practices or natural disasters.

While trade has become more prevalent in recent years, the debate on agricultural liberalisation has remained highly divisive and often dominated by ideological or emotional considerations. For some, trade liberalisation guarantees an optimal allocation of resources and promotes economic growth, while others consider that it results in the overexploitation of natural resources and destroys the livelihoods of poor farmers who are unable to compete on world markets. As always, the reality is more nuanced and doesn’t lend itself to simple solutions like full liberalisation or complete self-sufficiency. The following sections explore some of these complexities.

It is widely acknowledged that the biophysical impacts of climate change, including changes in temperatures and precipitation or the increased likelihood of extreme weather events, will alter crop and animal productivity. Assessing the scope and magnitude of these changes is difficult, also given the uncertainties regarding future climatic conditions and impacts depending on agro-ecological conditions, the types of crops produced, or existing agricultural systems – rain-fed or irrigated. Most models predict that some regions, particularly in the high latitudes, may see increases in production, but that major disruptions should above all be expected in Asia and Africa, precisely where rapid population growth will be concentrated in the next decades. As comparative advantages evolve in response to changes in yields and prices, several food importers will see their food bills surge, while others may lose their ability to grow and export food. International Food Policy Research Institute (IFPRI) estimates suggest that by 2050, South Asia’s imports of cereals could increase by 560 per cent from their 2000 levels, only because of climate change. In sub-Saharan Africa, this figure could reach more than 250 per cent.

Trade can help address these production shocks by enabling access to affordable food and creating jobs. From a global food security perspective, international trade will therefore play a critical adaptation role by offsetting climate-induced production shortfalls and making food available in countries that cannot produce it. This intuitively points to the importance of an open and undistorted trade system as an insurance policy against these disruptions, which is not to say that countries should rely exclusively on global markets to feed their population. For large countries such as China or India where the total volume of food traded internationally only represents a small share of domestic consumption, this is simply not an option. Second if productivity is reduced in some parts of the world but not increased elsewhere, trade won’t be able to compensate fully for the global reduction in productivity. Investments to enhance productivity are therefore necessary to complement the balancing role of trade. For the above reasons, these efforts should seek to avoid trade distortions that affect food security prospects in third countries. During the 2006-08 food price spikes, for example, unilateral measures in the form of export restrictions applied by large countries to stabilise domestic prices ended up exacerbating world prices significantly. By reducing their ability to access food at affordable prices, these measures generated further food insecurity in net importing countries. In the medium term, they also undermined confidence in international markets and discouraged investments in agriculture.

Reducing the environmental footprint of agricultural production and trade

Looking at the other side of the coin, concerns about the environmental footprint of agricultural exports are often invoked by more advanced countries as a rationale for restricting trade (e.g. through taxes, subsidies or non-tariff measures such as labelling schemes), while most developing countries tend to see these restrictions as disguised protectionism.

A first set of concerns relates to the GHG emissions generated by the transportation of food over long distances. This preoccupation lies behind the concept of food miles developed by major retailers and the widespread notion that consumers should privilege locally produced food as it generates less emissions. The argument can however be misleading if it only takes into account emissions generated by transport without looking at the whole product life cycle. From a climate change perspective, the emissions generated by production systems, cold storage or even consumption are also significant and can exceed those generated by transport. Analyses cited in Kasterine and Vanzetti have shown e.g. that the carbon footprint of flowers grown in open fields in Kenya and air freighted to Europe was lower than that of flowers grown in greenhouses heated by fossil fuels in the Netherlands. Seasonality also matters. Emissions from products grown in the UK and placed in storage for ten months are twice as high as those of South American apples sea-freighted to the UK. Even a consumer driving more than ten miles to purchase one kg of fresh produce will generate more GHG emissions than air freighting one kg of produce from Kenya.

A second set of concerns relates to the water content of exported products, not least because of the significant amounts of water required to produce certain agricultural goods. Early research looked at the water required to produce a particular commodity and ultimately embedded in exports as “virtual water”. The approach argues that trade should result in a better allocation of resources with water-scarce economies being able to import water-intensive goods and export those that require less water. Indeed, some analysis tends to support this common-sense proposition, showing that trade liberalisation has been associated with a shift to less water-intensive activities in water-scarce countries.

Other analysis cited by the ICTSD shows a more nuanced picture. The Southern African region, for example, imports higher volumes of virtual water from the rest of the world than it exports for both irrigated and rain-fed products. Interestingly, however, trade within the region shows the opposite, with net flows of virtual water occurring from South Africa – the most water-scarce country – to neighbouring countries with considerably better per capita water endowments. This is explained by a number of factors including capital availability, technology, transport, energy and communications infrastructure. In other words, water endowment is only one of several factors playing a role in determining comparative advantages.

A third area of concern relates to the provision of environmental services. Thriving wildlife, biodiversity, beautiful landscapes, or well-functioning watersheds are all products of agriculture. Society values these services, but they have no market value. This results in a situation in which suboptimum levels of these public goods are delivered, resulting in biodiversity decline, water pollution and degraded landscapes and soils. Producers complying with more stringent environmental requirements are in turn put at a competitive disadvantage compared to foreign competitors not bound by similar requirements. This is a typical case of market failure arguably justifying some form of government intervention to ensure the delivery of such public goods, usually as state aid, including direct payments. From an environmental perspective, however, such measures should be directly targeted at measurable outcomes and be proportionate to the cost of delivering the environmental benefits or they risk being abused. Cases have been documented in the European Union, under the previous Common Agricultural Policy (CAP), for example, where a farm would receive some 27,000 euros in direct payments when the real costs of complying with EU environmental requirements were estimated at approximately 75 euros. Such practices could hardly be justified as environmental.

Overall, the most important contribution from trade policy to address sustainability might be to remove some of the perverse economic incentives which still encourage unsustainable agricultural practices. For example, high tariff protection and subsidies in the EU but also in China, Turkey, the US, Korea or Japan continue to protect beef production, which is highly water and GHG emission intensive, while artificially bringing down world prices. Similar concerns have been raised with respect to other perverse subsidies such as fossil fuel subsidies or some irrigation subsidies. A second challenge consists in designing effective sustainability policies without unnecessarily affecting third countries’ legitimate trade interests. In this respect, basing trade-related measures on good science or international standards, taking into account the complexities of agriculture production and its impacts on the environment is often a good guarantee against arbitrary discrimination or disguised protectionism. While trade agreements may impose some limitations, as a general rule, good-faith environmental measures will not conflict with trade rules of the World Trade Organization (WTO) as long as those measures are not creating unjustified discrimination. Existing jurisprudence confirms that the WTO rule-book already provides a fair amount of flexibilities, including the possibility of differentiating products on environmental grounds or providing unlimited non-trade distorting payments for environmental purposes. Such flexibilities should enable producers to improve their environmental performance without being unfairly affected by foreign competition.

From a developing country perspective, however, high environmental requirements – including stringent sanitary and phyto-sanitary measures – can sometimes act as de facto barriers to their exports by setting the bar too high for them to comply. In these cases, trade related technical assistance and capacity building have a significant role to play in helping developing country producers comply with environmental regulations. Beyond technical assistance, measures restricting imports on environmental grounds may also raise equity issues. Air-freighted exports of fruits and vegetables from Kenya may indeed generate more GHG emissions than those produced in Europe. But small Kenyan producers relying on such exports for their livelihood can hardly be held responsible for the problem of climate change. Penalising their exports on climate grounds when international agreements explicitly exempt them from GHG reduction commitments may seem unfair.

As the international community starts implementing the Sustainable Development Goals (SDGs), this points to the need for concerted solutions at international level as opposed to unilateral measures. Recent developments have shown the limits of a strategy based on bilateral or regional trade agreements as illustrated by the fate of the Transpacific Partnership (TPP). At multilateral level, the WTO ministerial conference in Argentina next December may provide an opportunity to address some of these issues, including economic incentives which still encourage unsustainable agricultural practices.