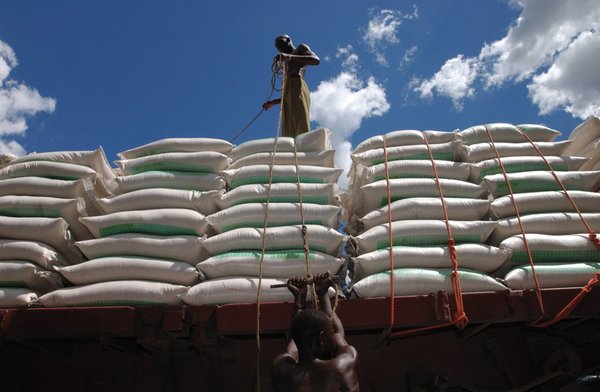 It is disputable whether export bans will bring the desired food security. In all events, they constitute a major barrier to intra-regional trade.
Photo: FAO/G. Bizzarri

Regional trade bears a great potential to improve food security in West Africa. Again and again, however, efforts made in this field by organisations such as ECOWAS and UEMOA are frustrated by the policies of individual countries.

In recent years West Africa has experienced serious difficulties in producing enough cereals to feed its population. Blame can be put on drought and other climatic or anthropogenic disasters such as war or political instability. But the issue also remains that cereal bans, used by politicians as a means to address food security, are increasing food insecurity and are in total disregard of the rules set by the Economic Community of West African States (ECOWAS) and the West African Economic and Monetary Union (UEMOA) on the free circulation of goods and persons with the West African sub-region. Trade policies and unlawful practices affecting the trade of cereals in West Africa are as follows:

National governments in West Africa often impose export restrictions on grain, in the form of global export bans or seasonal bans. By blocking exports, they hope to ensure an adequate supply of grain to their own markets during the “short season”. The seasonal export bans refer to a specific period that the ban is introduced for, while global bans simply block exports until further notice. Both seasonal and global export bans are a violation of ECOWAS rules prohibiting export restrictions.
The process by which national governments impose export bans is far from transparent. Often, the restriction is not an official act or decree, but rather a politically motivated decision made by a small committee composed of the heads of public safety, food security and territorial administration to meet the concerns of the people in the fight against hunger and grain shortages, a move expected to garner support for politicians in elections. However, grain actors (producers and traders) maintain that export bans in fact exacerbate food insecurity. The elimination of seasonal or global export bans would allow grain to cross borders unhampered, opening up new opportunities for intra-regional trade.

18 per cent VAT charged on cereals

Cereals traded across borders in West Africa are often unfairly taxed at 18 per cent (value-added tax, VAT). According to the WAEMU (UEMOA) VAT directive 2009, cereals are exempt from VAT (except for luxury rice), which means a zero VAT rate. Customs agents in West Africa continue to levy VAT on cereals and other staple foods because they are unaware of regional rules (ECOWAS or UEMOA). By knowing their rights, grain traders and transporters can help overcome the ignorance on the part of customs officers at the border.

A national certificate that is not universally recognised

The national phytosanitary certificate accompanying a shipment of local cereals is supposed to be honoured and accepted by the authorities of the importing country, without a new certificate being issued. When the local cereals are marketed within ECOWAS, the phytosanitary certificate from the exporting country should be valid in all countries of ECOWAS. In addition to the financial cost involved, traders lose time waiting for a new certificate, increasing their cost to transport cereals. Cereals producers and traders can rightly demand that this policy be applied correctly by the National Department of Agriculture, which oversees the phytosanitary authorities at border crossings. The ECOWAS countries have negotiated and implemented the technical arrangements required for the recognition of equivalence of each other’s phytosanitary procedures.

In recent years, national governments in West Africa have subsidised the price of improved seed and fertiliser for rice and other cereals, and then prohibited the export of cereals grown using subsidised inputs, even to other ECOWAS countries. The philosophy is that national governments do not want to subsidise their neighbours’ supplies. The export ban on cereals grown with subsidised inputs constitutes a breach of ECOWAS rules against restrictions on exports. It also discourages farmers to increase production to serve export markets. Cereals producers and traders can advocate with national governments to end this policy, asking that exports to other ECOWAS countries be allowed to encourage greater investment in production, processing and the cereals trade.

Refusal by Burkinabé authorities prevents the export of certified seed

In Burkina Faso, some cereals seeds producers reported having encountered an unfair trade barrier in 2009 and 2010, when the national seed certification agency refused to certify their seeds production because they might export part outside Burkina Faso. The government had provided a grant for the initial seed stock but made no stipulation that the seeds could not be exported. The ban on the export of cereals seed is a breach of ECOWAS rules prohibiting export restrictions. In addition, the seed certification agency of Burkina Faso is not the government agency responsible for formulating or implementing trade policies. Its role is to determine quality.

Advocacy from farmers’ co-operatives led by the Comité interprofessionel des céréales du Burkina Faso (CIC-B) to the Burkinabé Ministry of Agriculture and Commerce has led to the end of the practice and at the same time re-energised intra-regional trade in cereals seeds.

Certificate of origin required to avoid paying other duties

ECOWAS regulation A/P1/1/03 is very clear. No certificate of origin is required on grain trade between ECOWAS countries. In fact, in order to export cereals from one ECOWAS country to another, traders must submit a certificate of origin to customs officials indicating the importing country. Without this certificate, they are required to pay all customs duties as if the cereals were from a country outside of ECOWAS. This can add up to 23 per cent in additional costs (for UEMOA countries) or more, and then VAT, which is usually collected near the customs duty on imports from outside the ECOWAS, has to be considered.

The solution to this problem lies in better education of customs officials, who are often unaware of this provision. Customs officers at border posts should be informed of the rule itself. No certificate of origin is required on the grain trade between ECOWAS countries. Customs officials should also be aware that no certificate of origin is required for the “local cereals”, which should move freely within the ECOWAS region.

Malian traders have reported that customs officials in Côte d’Ivoire not only require the certification of the origin of their product, but also proof of the origin of the bags containing the cereals. Under international trade rules, the package or envelope is considered part of the full product. Fifteen ECOWAS countries belong to the World Customs Organization, which oversees the harmonised tariff system used world-wide. A series of decisions of jurisprudence have been developed over the years, and they are the general rules of interpretation (GIR). GIR No. 5 clearly states that the bag containing the cereal should be classified with the product contained within. In other words, the packaging is part of the product traded and is not considered a second product itself. To avoid confusion, the West African Cereals traders should avoid recycling bags of cereals from Thailand, Brazil, etc. More local cereals traders are more likely to travel in the production areas (Office du Niger in Mali, Senegal River Valley) and not in the major cities or capitals, where the non-ECOWAS cereals are imported.

Advocacy should be carried by national or regional cereal producers or producers’ associations. Their responsibility is to organise cereal professionals in ECOWAS member countries in West Africa to remove trade barriers so that: