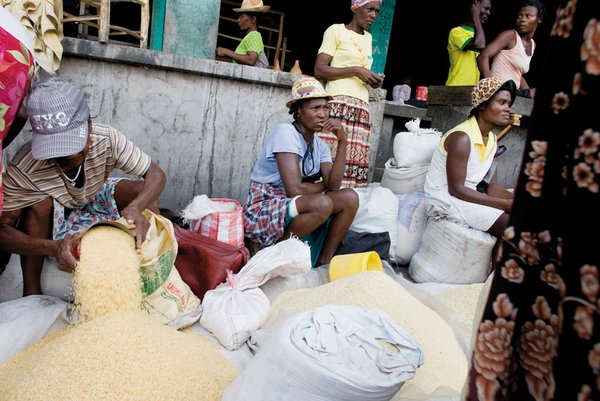 The price surge for basic food staples during the 2007–08 food crisis threatened the food security of millions of people. For a year now, international food prices have been on the rise again, fuelling concerns about the food and nutrition security of poor people across the developing world.

Global food prices have been rising sharply in the past year. In fact, the Food and Agriculture Organization of the United Nations (FAO) food price index shows that the price index for cereals rose by more than 60 percent from June 2010 to September 2011. During the same period, actual price increases by commodity differ. International maize prices, for instance, have almost doubled, and wheat prices have risen by more than three-quarters (FAO 2011). Rice prices, on the other hand, have not spiked as much, increasing only by half. Meat and dairy prices have also risen (see Figure on page 13). The price dynamics of the surge that we see now is different from that of the 2007–08 crisis. Rice and wheat prices at their peaks in 2011 are 36 and 25 percent lower than their peaks during the 2007–08 crisis. In contrast, the price of maize at its highest point now is 7 percent higher.

The same set of factors that resulted in the 2007–08 food crisis continue to be at play and have been pushing prices up. These factors include rising oil prices, growing biofuel demand, strong economic growth in emerging economies, a depreciated dollar, extreme climatic events, trade shocks from export restrictions and panic purchases, in addition to the long-term neglect of agriculture (Fan, Torero and Headey 2011). World biofuel production has continued to expand since the 2007–08 food crisis, growing by 70 percent in the United States and Europe (see Box on page 14). During this time, the US dollar value has continued to tumble against the euro, falling by 13 percent between October 2008 and September 2011 (European Central Bank 2011). Also, a number of extreme weather events such as the severe droughts in Russia, China and the Horn of Africa have contributed to higher international prices since the 2007–08 crisis.

From region to region, the relative importance of these factors varies. In Latin America, the price of maize has been rising due to the ever-expanding biofuel demand in the United States, as well as low maize stocks in the region. In Eastern and Southern Asia, both rice and wheat prices have been on the rise now for over a year because of the region’s growing food demand and increased production costs. In China, wheat prices have gone up by 40 percent and rice prices by 50 percent since June 2009. In the same period, wheat prices have increased by 30 percent, and rice prices by 35 percent in India (FAO 2011). This is attributable to strong economic growth in China, India and other parts of Asia, and to rising food production costs due to higher wages and input prices. In Africa, the historic drought in Somalia has pushed southern parts of the country into a state of famine, where the price of sorghum and cowpea has more than doubled, exceeding levels reached during the 2007–08 crisis (FAO 2011).

The poor are the hardest hit

High food prices and sustained price volatility have seriously undermined the food security of the world’s poorest consumers, who spend 50 to 70 percent of their income on food and have a limited capacity to adjust to rapid price increases. More than 44 million people fell below the 1.25 US dollar a day poverty line between June and December 2010 (World Bank Food Price Watch 2011). Women are more exposed to food price hikes than men. A study by the International Food Policy Research Institute (IFPRI) found that in Ethiopia, female-headed households were up to 15 percent more likely than men to lose their income or assets due to food hikes or shocks. During the 2007–08 food crisis, these households were not able to meet their food needs for two months longer than male-headed households. The current drought in East Africa is putting the food security of poor people across the entire region at risk, instantly threatening the lives of more than 10 million people (UN 2011) and jeopardising livelihoods, incomes and health in the long term.

Thriving economic growth has not shielded developing and emerging economies from high food prices. In contrast to the 2007–08 price hike, high food inflation is affecting large middle-income developing economies such as India and China. In India, food inflation has risen by about10 percent and in China by 13 percent over the year since September 2010. This inflation has consequences of great magnitude, because the two countries are home to millions of undernourished and poor people. Furthermore, the trend could potentially derail progress achieved in economic and social development.

What are the donors and developing countries doing?

Donors as well as developing countries have taken various measures to cope with high food prices and volatility. In April 2009, via their L’Aquila Joint Statement on Global Food Security, G-8 countries committed 22 billion US dollars for improving global food security within three years. To this date, however, about three-quarters of the commitments have not been disbursed. When food prices began to rise again in June 2010, the French government put food price volatility prevention at the top of this year’s G-20 agenda. The G-20 meeting of agriculture ministers in Paris launched the global Agriculture Market Information System as part of the efforts to reduce food price volatility. Other initiatives include the recent partnership between the World Bank Group and JPMorgan Chase setting up the Agriculture Price Risk Management Facility to make price-risk management products available to small-scale clients who might not usually have access to financial hedging tools due to high up-front costs and other requirements. These are all significant steps forward, but it is critical that donors and international development agencies urgently move from commitments to actions.

Developing countries have used a wide range of social protection measures, from food vouchers to school feeding programmes, to help poor and vulnerable people cope with rising prices, and investment programmes to increase long term food production. Tunisia and other countries in North Africa and the Middle East have used cash transfers to offer compensation for and facilitate access to expensive food. In China, releases of grain supplies as well as subsidies to agricultural input costs have helped stimulate food production and tame domestic prices. Ethiopia has been particularly successful at implementing food-for-work schemes to guarantee poor people’s access to food, as cash is not always enough. Under the Comprehensive Africa Agricultural Development Programme (CAADP) framework, many African countries have increased their long-term investment in agricultural growth and food security. More than eight countries are now spending the targeted ten percent of their national budgets in support to agriculture.

In comparison with the 2007–08 food crisis, fewer export restrictions or price subsidies have been imposed. But the few countries that have resorted to market-distorting policies have severely impacted food prices across their region. The food export ban currently imposed by Tanzania is pushing maize prices up in Kenya, where food prices were skyrocketing over the summer of 2011. In Asia, another type of distortionary policy is affecting food prices. The rice price support subsidies announced in Thailand, the largest rice exporter, have encouraged farmers to hold on to supply in view of guaranteed higher prices, pushing rice prices up in the region (FAO 2011). Instead, countries should opt for measures that promote social protection, access to food and agricultural production without distorting markets and controlling prices.

What does the future hold?

By 2050, the world population will rise to more than nine billion people. Along with increased urbanisation and industrialisation, growth in developing countries will also require more and better food. Projections by FAO, Organization for Economic Cooperation and Development (OECD) and IFPRI note that, in order for the world to cope with this need, food production will have to increase by 70 percent across the world, and actually double in developing countries. As energy prices remain high, demand for biofuel will continue to grow and compete with food. Climate change will further threaten food production, leading to crop yield declines of  up to 12 percent for both rainfed maize and irrigated rice by 2050. All in all, these factors will keep global food prices high and volatile. The IFPRI IMPACT model projects that world food prices will increase by 87, 31 and 43 percent respectively for maize, rice and wheat  by 2050. The first to suffer from these high prices will be poor people, children and women in particular. Under a pessimistic scenario, higher prices could lead to an increase in the number of malnourished children of almost 17 million by 2050.

In order to prevent food crises from happening again and again, a comprehensive approach that includes both short- and long-term policies and investments in agriculture, food security and social protection is needed. This approach should comprise the following actions: