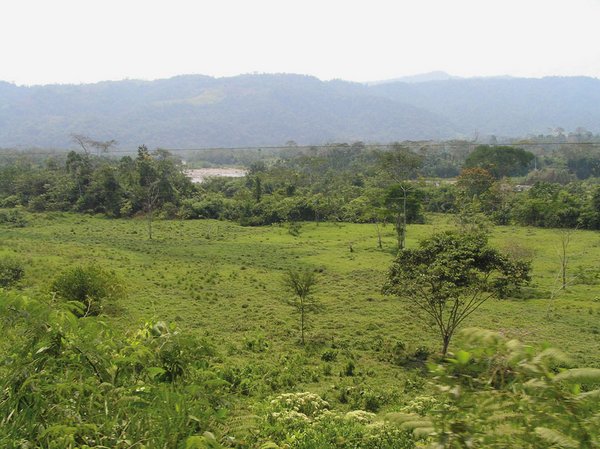 Digging into the soil in the southeast Peruvian Amazon reveals a typical soil profile, with a very thin topsoil layer above thick clay and minimal organic matter.
Photos: Matthew Fielding

A ‘nexus’ approach to soil and land management

Soils around the world are degrading rapidly, reducing ecosystem diversity and some important functions, threatening food and other human securities, and increasing vulnerability to climate change. This is a vicious cycle created by and leading to further unsustainable land-use practices. Integrated (‘nexus’) soil, land, water and ecosystem management can help to turn it into a virtuous cycle.

It may be the greatest challenge of our era: how to feed seven billion people and provide energy, water and other necessities in a world of growing demands but limited and, in many cases, declining resources. Agriculture is at the heart of this challenge; it provides food, animal feed, bioenergy, fibres and other crucial supplies, but it is also a major cause of land and water degradation and biodiversity loss.

In other words, even though we urgently need to increase agricultural productivity, the way we use the land is often reducing productivity – to the point that 24 per cent of the world’s land, including more than a third of cropland, is degraded; twelve million hectares are lost to droughts or desertification each year. Economic losses are also substantial: the global cost of land degradation has been estimated at 3–5 per cent of agricultural GDP, and significantly higher in some countries, a UN review found.
Land degradation occurs for many different reasons, including excessive tillage, large-scale monocultures, inadequate crop rotation and fallow periods, overgrazing, cultivation of steep slopes, removal of vegetation, overuse of chemicals, and other common but unsustainable practices. Soil organic matter is lost, reducing the soil’s capacity to store water and nutrients, and fertility and biomass production decline, lowering agricultural yields.

As their livelihoods are threatened, farmers may exacerbate the problems by overusing resources even more, falling into a vicious cycle, as in the Peruvian case (see Box below). The effects spill over onto surrounding landscapes, affecting the functioning of ecosystems – for example, through water pollution and changing local climate. Groundwater recharge and downstream reservoir storage may also be compromised, and biodiversity can decline, reducing pollination, natural pest regulation and climate resilience. Floods often increase as well. Degrading environmental conditions, in turn, feed back negatively on farming potentials.

Burning away a vital resource – the case of the Peruvian Amazon
In Amazonian Peru, soil is degrading rapidly because of a highly destructive set of practices. Farmers cut down forests, then burn the land to clear it for planting. They grow crops for one or two years, then seed grass for cattle grazing, or else abandon the land. The soil nutrients, already limited, are quickly exhausted, and the soil pH level declines rapidly. Soil microbial biomass can decrease by 75 per cent within 12 months. Irreversible and complete soil structure collapse can occur within 30 months, and remediation on a large scale is nearly impossible.

An estimated 1.5 billion rural people depend on degraded land. The problem is particularly serious in Africa south of the Equator, Southeast Asia, southern China, north-central Australia, the Pampas in South America, and swaths of boreal forest in Siberia and North America, according to a 2008 report from the Global Assessment of Land Degradation and Improvement (GLADA) project. An astonishing 95 per cent of Swaziland’s land is degraded; 66 per cent of Angola’s, 64 per cent of Gabon’s, 60 per cent of Thailand’s, and 60 per cent of Zambia’s. In China, 457 million people are affected by land degradation.

Soil and land degradation is also a serious problem in the context of planetary boundaries related to atmospheric carbon dioxide and climate change, nitrogen and phosphorus (not only in terms of water pollution, but also regarding depletion of global phosphorus resources), water (reducing “green water” stored in the soil and atmospheric moisture recycling) and biodiversity (see Rockström et al., 2009). Slowing and reversing soil and land degradation is therefore a key element in the management of the global commons.

Can the trend be reversed?

Overall, land degradation has increased, from 15 per cent of land surface per a 1991 assessment, to today’s 24 per cent – and the areas identified by the two studies do not significantly overlap. This means a great deal of historically degraded land is now stable at very low productivity. But land can also be restored; the GLADA study found that almost 16 per cent of global land area was improving, including 20 per cent of croplands – due to irrigation, forest plantations and land reclamation, and other measures.

This is where the “nexus” approach can be particularly valuable. To a great extent, unsustainable agricultural practices are the result of a narrow focus on a single goal in particular – to maximise crop yields and farm revenues. A nexus approach accounts for externalities and seeks to reduce tradeoffs and build synergies between different sectors and activities (water, energy, food), as well as natural resources (soil, land, water, carbon, nutrients) and climate regulation (e.g. through carbon sequestration).

How will farming change as a result of adopting a nexus approach? It becomes less input-intensive (in terms of energy, irrigation, agro-chemicals and other non-renewable inputs).

It prioritises soil and water conservation – by minimising tillage, for example, and by diversifying and rotating crops more. It also embraces agro-ecological practices such as recycling of waste products, integrated pest management, water harvesting, and “green manuring” – in which cover crops are grown during fallow cycles to add nutrients and organic matter to the soil. All these approaches can support agricultural intensification – just more sustainably – and bring co-benefits such as reduced water pollution from agricultural runoff and increased terrestrial carbon storage.

How feasible is a nexus approach to soil and land management?

The case for a nexus approach to reducing soil and land degradation is strong. Soils are essential for all terrestrial life, playing a key role in biomass production; they are central to ecosystem, land and water management. In fact, soil organic matter is frequently used as a proxy indicator for the status of various ecosystem services. Soils also serve as “natural infrastructure”, which is often less resource- and cost-intensive compared with hard infrastructure. And land degradation contributes to climate change, having reduced the amount of carbon removed from the atmosphere by nearly one billion tonnes.

Science has recognised nexus or integrated approaches for quite some time as providing opportunities to improve resource use efficiencies across different resources, while minimising over-exploitation and environmental degradation. Several initial assessments have demonstrated the potential benefits of nexus approaches (see e.g. Howells et al. 2013).

Some smallholder farmers also already take nexus approaches by necessity. They depend strongly on natural resources and their recycling, because they cannot afford additional inputs such as agro-chemicals or energy.

Still, implementation of nexus approaches at larger scales – across landscapes or regions – remains a big challenge. There are hardly any examples of up-scaling of local nexus approaches. Spatial planning has hardly begun to address dynamic multi-functional configurations of landscapes. Reasons for this implementation gap include the added complexity, the amount of knowledge required, high transaction costs, and institutional structures that are not conducive to cross-sectoral management and planning.
Even the Kenya Agricultural Carbon Project (see Box below) reveals the challenges of up-scaling. The main actors there are farmers groups supported initially by international donors and NGOs, but not yet state agencies which could mainstream such a nexus approach into their policy and decision-making.

The Kenya Agricultural Carbon Project, implemented by the NGO Vi Agroforestry, is demonstrating the many potential benefits of “climate-smart” agriculture. It takes an integrated approach to agricultural land management, including recycling of residues, composting, cover crops, and land rehabilitation, and also operationalises the principles of a multi-functional production system by way of agro-forestry. The goal is to achieve a “triple win” for smallholder farmers: increased agricultural productivity, reduced vulnerability to climate change, and soil carbon sequestration (yielding verified emission reductions, some of which the World Bank BioCarbon fund is purchasing). The climate mitigation potential of this project is significant even when taking into account potential increases in agricultural inputs (e.g. fertiliser, energy) and livestock-related greenhouse gas emissions.

New impetus for a well-known approach

To overcome these obstacles, we must first make clear that the nexus is not a new concept, but rather a new interpretation of previous systemic concepts and integrated approaches, such as ecosystem approaches introduced by the Convention on Biological Diversity (CBD), the landscape approaches endorsed by the World Bank, integrated water resource management (IWRM), and multi-functional production systems (e.g. agro-forestry, crop-livestock-biofuels, ecological sanitation), among others.
Why bother talking about the nexus, then? Because the concept currently enjoys a high profile among both researchers and policy-makers (see the nexus resource platform www.water-energy-food.org and the large number of nexus conferences, initiatives, etc.). Thus, using the nexus framework can provide new impetus to these concepts. The urgency of the soil and land degradation problem also creates new entry points for implementation.

An important strategy will be to identify more “win-win” opportunities. International agencies such as the UN Food and Agriculture Organization (FAO), and other donors and networks such as the Global Soil Partnership can provide useful knowledge and an important dialogue platform in this regard.
Institutional obstacles (“silos”) can be overcome by bridging institutions that set overarching and long-term goals and negotiate tradeoffs. Institutions with a “nexus mandate”, such as ministries of environment, need to be strengthened relative to more sectorally focused institutions (e.g. ministries of water or energy).

Investments can support up-scaling – for example, by targeting payments for ecosystem services at landscape- or regional-scale integration. For that, economic benefits of a nexus approach (or costs of conventional “silo” approaches) need to be recognised, such as in the proposed TEEB (The Economics of Ecosystems and Biodiversity) agriculture and food study. A July 2013 concept note for the study frames it in very nexus-compatible terms, citing a growing body of knowledge which shows that “agricultural production depends on services provided by healthy natural ecosystems”. The note identifies a key knowledge gap that, if filled, could strengthen the case for integrated approaches: the values of many ecosystem services “are largely invisible in markets and thus are neither reflected in national accounting and statistics nor land use and management decisions”.
Eventually, the main challenge for implementing (context-specific) nexus approaches to soil and land management will be to engage with actors at all levels: from farmers who are to change to ecologically sound practices, agro-businesses that will need new business models, to policy-makers who will have to co-ordinate across sectors.