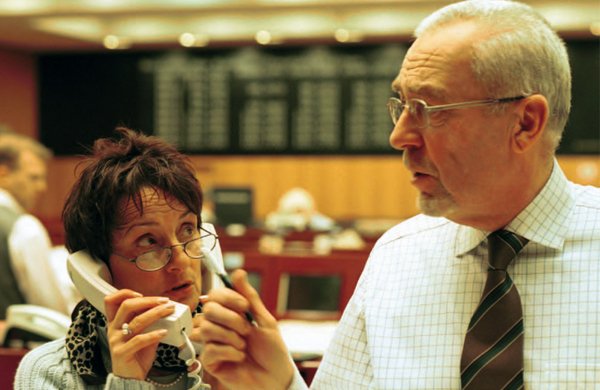 The backdrop to speculations: forecasting the psychology of the market.
Photo: J. Boethling

A mere question of supply and demand

Agricultural commodity prices will be higher in the future than in the past. The reason is simply that agricultural demand growth is outstripping growth in supply. Agricultural demand will at least double in the first half of the 21st century because of continued rapid population growth and income growth in developing and newly industrialising countries. The rapid growth in the demand for food can be met by expanding the acreage or by producing more on the land that is being farmed already. Expanding the acreage is not really an option because the land available for agricultural production is limited. In addition, water is increasingly constraining productivity growth. Estimates suggest that about 90 percent of future production growth must come from productivity growth.

Who is the one to blame?

The growth in biofuel production is frequently mentioned as a prime driver of increasing commodity prices (see also Box on page 14). Its relative importance is overrated, however. Since the turn of the millennium, the acreage for biofuel production has been expanded to about two percent. This suggests that it has contributed to an overall increase in commodity prices of about seven percent only.

Also, it is frequently argued that it is speculators who have driven up the prices of agricultural commodities. However, this argument does not hold much water. Speculators want to make money. They can only be successful when they predict future prices correctly. If they don’t, they lose money and will quickly be driven out of the market. Another aspect is that speculators are active in the futures markets and not in the spot markets, where actual commodities are traded (see also article on pages 17–21). In addition, it is important to keep in mind that futures markets also serve as a hedge for market participants against the price risk. They can perform that function only if there are speculators who are willing to carry the risk.

One might argue that this is correct when it comes to long-term trends in international agricultural commodity markets, and still ask if speculators are a major cause of short-term price volatility. To answer that question, it is helpful to look at historic price fluctuations. Time series of agricultural commodities show limited monthly price fluctuations with occasional spikes as in 1973–74, 1996 or 2007–08, but no deep troughs. The reason for this asymmetry in price fluctuations over time is that there is ample storage capacity around the globe such that high production in one period is absorbed by growing stocks. The same holds true for periods of low production which lead to a decline in stocks but have little impact on prices. However, when depleted stocks coincide with low production, prices rise rapidly, and speculators amplify the price increase.

The conventional wisdom is that exactly this happened during the price spike of 2007–08. In seven of the preceding eight years global production had exceeded consumption, and global stocks were at low levels (although surely, if production exceeds consumption, there ought to be high levels of stocks!). In this situation, there were crop failures in Russia, South East Europe and Australia – in particular in wheat. In addition, export restrictions by major exporting countries reduced global supply further which, together with speculators, drove up prices even more.

Whether this common explanation is actually correct was to be shown by an examination of the factors influencing the 2007–08 price spike (see Table). It was revealed that the story had to be changed significantly and that speculators did not play a major role in the 2007–08 price spike. Rather, it was supply and demand changes that drove prices. This is exemplified for wheat here. The table depicts the contribution of each variable to the price spike with all other variables unchanged and the combined effect of all variables included. Note that the sum of all individual variable effects does not add up to the combined effect of all variables, as the variables are linked to each other multiplicatively.

Export restrictions and the devaluation of the US dollar also contributed significantly to the price spike. None of the other variables had a major impact – with one exception, the volume of production. Contrary to conventional wisdom, crop failures in some important production areas did not contribute to the price spike. In fact, poor crops in some parts of the world were more than compensated for by increasing production such that increasing global wheat production during our period of analysis actually acted to limit the price increase.

Our analysis suggests that there is no reason to assume that speculation drove the price spike of 2007–08. In fact, based on monthly data, it is possible to explain the price spike entirely by traditional supply and demand determining variables – in particular by the price of energy and the freight rates. We have demonstrated elsewhere that similar results hold for corn and soybeans as well.

In sum, the price of energy has not only become the single most important determinant of the longer term increases in international agricultural commodity prices. It also contributed far more than any other variable to the price spike of 2007–08, suggesting that this is likely to be the case for the present price spike that started in 2010.