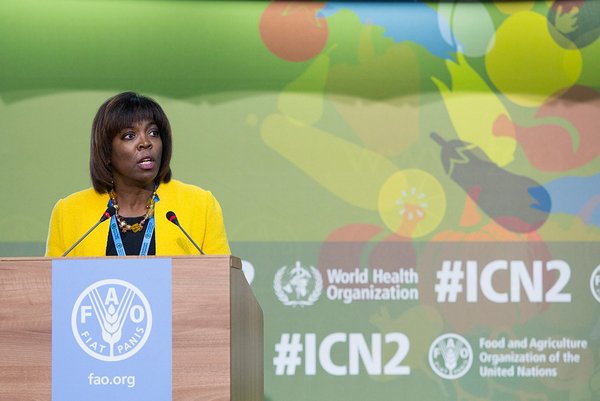 A4H, ICN2, MDD–W – anyone not dealing with the topic of nutrition every day can easily get lost in the tangle of terms, programmes and organisations. Our Nutrition Glossary may help you a little here.

A4NH
The Research Program on Agriculture for Nutrition and Health (A4NH) is one of 16 research programmes of the Consultative Group on International Agricultural Research (CGIAR). It has four components: value chains for enhanced nutrition; biofortification; prevention and control of agriculture-associated diseases; and integrated agriculture, nutrition, and health programmes and policies.

Ag2Nut Community of Practice
The Agriculture-Nutrition Community of Practice (Ag2Nut CoP) is a global network of over 2,000 professionals from over 90 countries. The group arose in June 2010 to facilitate the work of multiple organisations all concurrently developing guidance on how to link agriculture and nutrition. The Ag2Nut CoP is hosted by the United Nations Standing Committee on Nutrition (UNSCN).

Biofortification/Fortification
Fortification is the practice of deliberately increasing the content of an essential micronutrient, i.e. vitamins and minerals (including trace elements) in a food, so as to improve the nutritional quality of the food supply. Biofortification is the process by which the nutritional quality of food crops is improved through agronomic practices – either by conventional (selective) plant breeding or by genetic engineering. So biofortification aims to increase nutrient levels in crops during plant growth rather than through manual means during processing of the crops. It may therefore present a way to reach populations where supplementation and conventional fortification activities are difficult to implement and/or are limited.

DALY – Disability-Adjusted Life Year
The disability-adjusted life year (DALY) is a measure of overall disease burden. It is expressed as the number of years lost due to ill-health, disability or early death. The DALY was developed in the 1990s as a way of comparing the overall health and life expectancy of different countries.

FIES – Food Insecurity Experience Scale
The Food Insecurity Experience Scale (FIES), developed by the UN Food and Agriculture Organization’s ‘Voices of the Hungry’ project, is an experience-based metric of severity of food insecurity that relies on people’s direct responses. People are asked eight questions regarding their access to adequate food. The FIES is to supplement traditional ways that indirectly assess food insecurity, such as FAO´s ‘prevalence of undernourishment’, determinants such as ‘food availability’ or ‘income’, and outcome measures such as ‘nutritional status’.

HDDS – Household Dietary Diversity Score
The Household Dietary Diversity Score (HDDS) counts the food of groups that a household has consumed over the preceding 24 hours (FAO score). It is meant to reflect the economic ability of households to access a variety of foods, and sets out from the assumption that an increase in dietary diversity is associated with socio-economic status and household food security. Furthermore, various dietary diversity scores have been validated for several age/sex groups as measures to reflect macro and/ or micronutrient adequacy of the diet. This is why different food groups are entered in the respective scores.

Hidden hunger
Hidden hunger or micronutrient deficiency is a form of –> undernutrition that occurs when intake or absorption of vitamins and minerals is too low to sustain good health and development in children and normal physical and mental function in adults. Causes include poor diet, disease, or increased micronutrient needs not met during pregnancy and lactation.

Hunger
Hunger refers to the distress associated with lack of food. The UN Food and Agriculture Organization (FAO) defines food deprivation, or –> undernourishment, as the consumption of fewer than about 1,800 kilocalories a day – the minimum that most people require to live a healthy and productive life.

ICN/ICN2
The Second International Conference on Nutrition (ICN2) was a high-level intergovernmental meeting at the FAO Headquarters in Rome in November 2014; the first conference (ICN) took place in 1992. The outcome documents of the ICN2 include the ‘Rome Declaration on Nutrition’ and the ‘Framework for Action’; endorsed by the participating parliaments, they are intended to commit world leaders to establishing national policies aimed at eradicating malnutrition and transforming food systems to make nutritious diets available to all.

SUN Movement
The Scaling Up Nutrition (SUN) Movement launched in 2010 is a global network of representatives from governments, civil society, the United Nations and the private sector. The aim is to address malnutrition through country-led approaches. Fifty-six countries are now represented in the network.

Undernourishment
Undernourishment describes a chronic calorie deficiency with consumption of less than 1,800 kilocalories a day, the minimum most people need to live a healthy, productive life (see also –> hunger).

Unternutrition
Undernutrition signifies deficiencies in any or all of the following: energy, protein, or essential vitamins and minerals. Undernutrition is the result of inadequate intake of food – in terms of either quantity or quality –, poor utilisation of nutrients due to infections or other illnesses, or a combination of these factors.