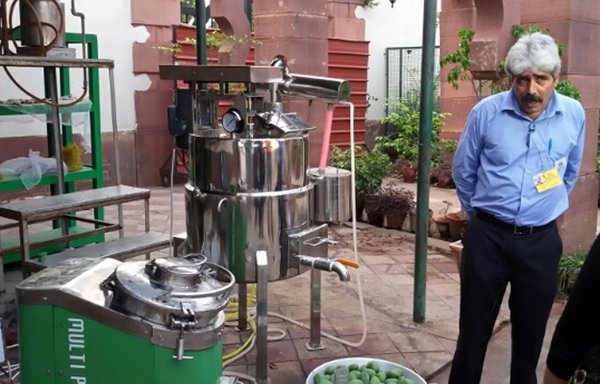 Dharambir Kamboj and his food processing machine (in front). He is one of the five innovation scholars selected for First Scholar in the residence programme at the President of India House.
Photo: A. Dey

A food processing machine that makes a difference

There are many farmers throughout the world who have clever ideas when it comes to optimising their work routines or creating new sources of income. However, they usually lack the institutional support needed to turn these ideas into practice or viable market-ready products. The following entrepreneurial example from India shows how the potential of these grassroots innovators can be tapped for larger social good.

Dharambir Kamboj used to be a cycle rickshaw driver in Delhi. While ferrying passengers to a herbal medicine market in old Delhi, he picked up a lot of knowledge about the medicinal plants and their uses. After meeting with an accident leaving him injured and without a rickshaw, he had to return to his village to recover. It was then that he considered putting his knowledge of herbal plants and products to better use to augment his livelihood. He recalled accompanying his mother in his younger days to collect Kesuda (Butea monosperma) flowers. These flowers are used to make natural colours for playing Holi – an ancient Hindu religious festival which is also known as the “Festival of Colours”. He could not afford education after class ten and started helping his father on the farm.

When the idea came up to use his knowledge of herbal plants and products to make a livelihood, Dharambir was using a small piece of land of an acre and a half to grow various medicinal plants and exotic fruits and vegetables like strawberries, button mushroom, baby corn, etc. But he realised that he would not make enough income with primary production alone. After visiting a few fruit and herb processing centres, he started developing a multi-purpose food processing machine. The first prototype was ready by 2006. It was used mainly for extracting juice from aloe vera grown on his farm. Dharambir then modified the machine to incorporate an essential oil extracting facility. One of the salient features of the machine was that it made pulp or juice without breaking the seeds, so the product did not turn bitter or change taste. The device is designed in such a way that it can also be used as a big pressure cooker, a homogeniser or a steriliser.

The Honey Bee Network as an intermediary

In 2007, Dharambir was contacted by Honey Bee Network Volunteers (see box at the end of the article) and staff from the National Innovation Foundation (NIF) India to explore the possibility of helping him improve his machine. Initially, he did not trust the offer, but slowly, after a few interactions, he realised that this was an opportunity to take his indigenous Research & Development to the next level. “NIF and GIAN helped me to deal with paperwork and gave me money to make a new improved model of the machine,” Dharambir said. “I had no reason anymore not to trust them.”

After receiving technical inputs and financial help (about 1 million rupees [Rs]; 1 Rs = 0.016 USD) from NIF through the Grassroots Innovations Augmentation Network (GIAN) – North, the second model was made. It became smaller and lighter. In 2008, the two organisations helped the innovator with the necessary paperwork – getting a Food Products Order (FPO) license and sale tax number and registering his firm, sending his product for lab testing and filing a patent in his name. In the same year, NIF helped the farmer with a soft loan of Rs 60,000, which he paid back in six months. In the following years, he received additional support totalling Rs 780,000 under NIF’s Micro Venture and Innovation Fund (MVIF) scheme, which he also soon afterwards repaid. Furthermore, in 2012, he was granted Rs 180,000 for running a community workshop to support other innovators in his region. Also, the Honey Bee Network facilitated his participation in various exhibitions like the India International Trade Fair (IITF), New Delhi, Agritech India, Bangalore, the Indo-US summit Noida, etc.

However, Dharambir still recognised various limitations of his machine. A collaboration was facilitated between him and a professional designer firm in New Delhi. The new version was a top-feeding design. It had a bigger inlet, was hence easier to clean, and was made of food-grade steel. It was safer, much more elegant and easier to use. Dharambir processes his farm produce in this multi-purpose food processing machine to make various herbal products like creams, shampoos, juices, laddus (sweets) and other processed food products, rose water, aloe vera juice, gel, essential oils, etc. He sells these under the brand “Prince”, named after his son. But above all, he sells processing machines. He has sold more than 250 of them so far. He also helps communities and small entrepreneurs to set up their own enterprises. In his processing unit, he employs 30–35 women.

One of the strongest factors in the increasing popularity of the machine is Dharambir’s strategy of community capacity building. He travels to different parts of the country, identifies the local resources and trains the communities in making products from them. With his dexterity and the wide adaptability of his machine, he has maintained a strong rapport with his customers and hence has built a strong feedback system. He addresses their complaints individually and effectively. Dharambir also participates in various fairs and trade fairs where he offers free products to everyone visiting his stall. He distributes pamphlets at the fairs and elsewhere. He also markets his product through the cable TV network. He doesn’t believe in aggressive marketing and says his customer and others will promote his product through word of mouth.

Innovative from the start

Dharambir remembers the time when he had neither money nor respect and the villagers would mock him and call him insane on account of his proclivity towards making different contraptions. Once, he was bashed up by his father and his brothers, who had also hidden the letters of appreciation which he got for making a low-cost automated sweeping machine in 1995, having been touched by the plight of the sweepers. Earlier, in 1990, he had made a battery-operated spraying machine for his farm, using a tape recorder motor and a small insect trap.

Today, the agro-entrepreneur owns a big house, his children are well educated and settled, and he has a full-fledged manufacturing unit. He sells the machine as well as herbal products. Last year, he was covered by BBC for having paid tax on Rs 7,000,000. He has come a long way and made a difference to the lives of many small farmer entrepreneurs, tribal communities and others. He has participated in several Shodhyatras (learning walks organised by SRISTI, the Society for Research and Initiatives for Sustainable Technologies and Institutions, twice a year) to inspire local communities to leverage their own creativity.

The Honey Bee Network unites like-minded innovators, farmers, scholars, academicians, policy makers, entrepreneurs, non-governmental organisations (NGOs) and non-governmental individuals (NGIs). Being present in more than 75 countries, the Network’s philosophy is that in order to become sustainable, a knowledge system has to be both just and fair. Hence, while collecting knowledge, the Network has made it a norm to acknowledge, attribute and reciprocate the knowledge provider with name and reference (unless desired otherwise by him or her). The cross-pollination of ideas helps enrich communities through people-to-people learning. Out of any financial gain that accrues from the value addition in local traditional knowledge and innovation, a fair and reasonable share goes back to the knowledge holders. A further premise is that people’s ideas are shared in an easily understandable manner in the local language. In India, every summer and winter, volunteers pursue learning walks (Shodhyatras) to share and learn from creative communities, generally in the most neglected areas of the country. More than 5,000 km have been covered through these walks so far.