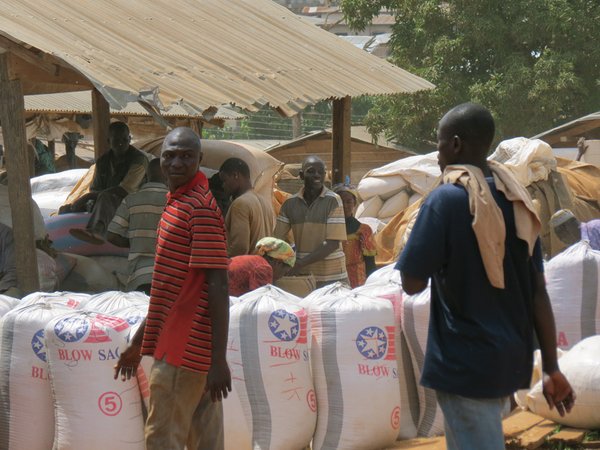 Techiman market will no longer be competitive if infrastructure is not improved.
Photo: © M. Plewa

A boost for inclusive farmer-trader relationships

Representing 30 per cent of Ghana’s formal trade in maize, the Techiman market serves as the main cereals trade platform within the country and the sub-region. However, its role in the region’s economic development is threatened by several shortcomings. The Municipal Assembly and the Techiman traders have therefore launched an innovative public-private initiative to upgrade the maize market infrastructure.

As Ghana's most widely consumed staple crop, maize accounts for 50–60 per cent of the country's overall cereal production and contributes significantly to food security and rural incomes. While involving about 1.6 million largely small-scale producers, a considerable workforce is also employed and income generated at the upstream and downstream ends of the value chain. Even if per capita consumption (except subsistence) is set to decrease due to changing consumption patterns of the rapidly growing middle-class urban population, aggregate human consumption of white maize is likely to remain stable with population growth offsetting shifting demand trends. But rising industry demand for the production of starch, grits, flour, fermented dough and animal feed (yellow maize) will contribute to an overall growth rate in demand of an estimated 2.6 per cent per year. Furthermore, Ghana holds the potential of becoming a breadbasket for neighbouring Sahel countries.
It is against this background that maize has been selected as one of the strategic commodities for support under the Government of Ghana Food and Agriculture Sector Development Policy (FASDEP II) that frames the country’s obligations under the Comprehensive Africa Agriculture Development Programme (CAADP) Compact signed in 2009.

Given low productivity with an estimated 37 per cent gap between achievable and actual maize yields and high post-harvest losses ranging from 18 per cent to 35 per cent according to different sources, there is a significant dormant leverage potential hidden in smallholder farming and traditional trading. In other words, market supplies could be considerably increased even without expanding production areas. But it is obvious that raising farm productivity will only translate into enhanced food security and rural livelihoods if the root causes of agri-food market failure are addressed.

A driver for local economic development – but with many inadequacies

However, market operations are highly inefficient. Failure to maintain the market over decades has left infrastructure in a dilapidated state. The place is seriously congested, with trucks sometimes having to wait for days to get into the market for unloading and loading. During the major (rainy) season, maize has to be dried on unpaved muddy ground. Market imperfections are also clearly demonstrated by security problems for stored produce and cash-based business transactions and the absence of standard weights and measures. The lack of established routines for measuring moisture contents in maize raises the risk of infestation by Aflatoxin, a carcinogenic fungus that grows under humid conditions.

The Techiman maize market – a transhipment for Ghana and the sub-region
Thanks to its strategic position at the crossroads along the North-South Trans-West Africa Highway, the Techiman market serves as the major trade hub for food staples in Ghana and as an important trade platform for the West African sub-region, especially for neighbouring Sahel countries. With about 80,000 tons throughput per year, the Techiman market realises around 30 per cent of the country’s formal trade in maize.

Located at the centre of Ghana’s maize belt formed by the Brong Ahafo and Ashanti Regions, the market attracts supplies from different catchment areas following seasonal production calendars: during the major (rainy) season, supplies are mainly assured from the maize belt; during the minor (dry) season, small volumes of local supplies are supplemented with deliveries from the Northern, Upper East and Upper West Regions. Despite the distance, supplies from these regions are on the rise since Ghana’s northern bread basket investment programme started three years back aiming at developing commercial agriculture in the largely food insecure regions in the north. The Techiman market also attracts buyers from neighbouring Sahel countries.

Owing to scarce drying and warehousing capacities in the maize belt, they procure maize during the rainy season when prices are low. The maize is then said to be (largely informally) exported, dried and stored across the border and resold in Techiman once prices go up during the minor season. While this price arbitrage contributes to somewhat levelling the volatility of maize prices between the major and minor seasons and to reducing post-harvest losses, these foreign speculations represent forgone opportunities for local producers and traders. They furthermore add to transaction unit costs that in the end have to be borne by largely poor consumers.

Resulting high post-harvest quality and volume losses and prohibitive unit transaction costs bear on farmers’ and traders’ margins and discourage private investments into maize production, transport and logistics, trading or processing. As a consequence, some suppliers and buyers start to shift to other nearby (although smaller) markets that have already been refurbished. Furthermore, conflicting policy priorities and market interferences (e.g. export bans) seriously affect the competitiveness of Techiman as the leading maize trade platform in the sub-region.

Aiming at enhancing local economic development and the viability of farmer-trader business linkages, it is obvious that public and private sector leadership and investments are critical for re-positioning the Techiman maize market. Amidst the on-going transformation of agri-food value chains in Ghana and West Africa, this is a strategic step in order to avoid exclusion of the Techiman maize market from prospective future mainstream cereal marketing schemes such as the Warehouse Receipt System. Viewing the challenges as opportunity, the Techiman Municipal Assembly (TMA), which is mandated to plan and co-ordinate local economic development, and the Techiman Maize Buyers and Sellers Cooperative Society (TCS; see Box below) decided to join forces guided by the vision that: “The Techiman Market remains the leading maize trading platform in Ghana and for the sub-region to support actors to capture the best value possible at all stages of production, processing and trading.”The Assembly and traders committed themselves to:

Trustful farmer-trader linkages – home-grown informal inclusive business models
The Techiman Maize Buyers and Sellers Cooperative Society (TCS) represents maize traders’ interests at local and at national and regional levels such as in the recently founded West African Cereal Network. The society provides member services such as market information and book-keeping (all in and outgoing maize supplies) and runs a reputable dispute settlement system that also serves farmers in case of disagreements with buyers.

The majority of TCS members extends embedded services including crop pre-financing, advice and livelihood support to about 2,500 small-scale farmers (around one third of TCS suppliers). This is a strong indication that reliable, long-term and trustful business linkages exist between traders and farmers. Interdependencies assure a balance of power between the two contract partners given the reliance of traders on farmers’ supplies during the minor season and the dependence of farmers on traders’ buying maize during the major season.

Following an assessment of upgrading needs, recommendations for market improvements and an architectural design have been developed and a first estimate of investment costs submitted (roughly 0.5 million Ghana cedis or 200,000 euros for public and roughly 1.5 million cedis or 600,000 euros for private investments). There is clear commitment from all parties. The TMA has budgeted first items, and the TCS has started collecting member contributions for the construction of sheds. The efforts of the Assembly and the traders are accompanied by the Traditional Council (which owns the land the market is operating on) through the recently established Market Development Committee, the Techiman branch of the Ministry of Food and Agriculture (MoFA) and the Ghana Grains Council (GGC), a private-sector cereals industry representative body.

With growing demand of industry and institutions for procuring sizeable volumes of maize, the opportunities for the Techiman maize market to grow are obvious. However, rising requirements for quality assurance, reliability of supplies and participation in forthcoming innovative marketing systems (Warehouse Receipt System, Commodity Exchange) will be challenging for traditional agri-food trading systems. Upgrading the market infrastructure and up-scaling existing inclusive farmer-trader relationships is imperative for the Techiman maize market to recoup its competitiveness and keep its vital role for local economic development in the municipality.

To promote private investments (warehouse, drying, hostel and sanitary facilities), the Assembly intends to organise an investment forum. While the TMA is currently examining different sources of public financing, various development partners have expressed interest in supporting private-sector investments, in particular for the construction of a warehouse and drying facilities.

In their efforts to come together and plan the public-private initiative, the Municipal Assembly and the traders’ society have been supported by the Market Oriented Agriculture Programme (MOAP), a technical assistance measure funded by the German Federal Ministry for Economic Cooperation and Development (BMZ) and implemented by GIZ (Deutsche Gesellschaft für Internationale Zusammenarbeit) in co-operation with MoFA. In the past, MOAP supported TCS in building capacities in the competent use of marketing information systems and plans to assist members in upgrading and up-scaling their existing informal contract farming/embedded service systems already linking about 2,500 smallholders to the market. Thereby, special focus is laid on developing capacities for quality assurance from the farm to the market and the participation in the Warehouse Receipt System. The TMA will be supported in learning from experiences made in upgrading the maize market as catalyst for further infrastructure development in the Techiman food market. In a wider perspective, MOAP is currently also assessing opportunities and needs for improving the coherence between agricultural and trade policies, a major precondition for removing barriers to smooth agri-food market functioning.